It’s possible that I’ve had this post title in my head for a while and was just looking for the right outfit to use it for. And here it is! A classic dress and some great red lipstick!

I don’t wear makeup a lot in Second Life, but a girl’s gotta have a few really great bright red lipstick shades handy. You never know when you’ll need them. This new pack by LIVIA is perfect for that. It is a free group gift and the group is free to join. There are 6 shades included, 2 with a nice gloss. They all come in classic tattoo layers as well as appliers for Catwa, Lelutka, and Omega.

My dress is a free gift from Lavian&CO. It is for the SL Frees & Offers group, which is free to join. There are some other gifts for that group and others available too, as well as some nice one for the Lavian&CO store group (although that one has a fee to join). The dress that I’m wearing has a HUD with a bunch of patterns in different colors and sizes for:

Do you know what I like even better than regular gifts? Unexpected surprise gifts! And that’s just what I found as I was browsing Designer Showcase. There are 4 gifts set out in front of Lavian&Co’s booth and they are all seriously fabulous. I had trouble deciding which one to show you today, but finally settled on this cute, casual look.

How great is this little outfit? I tried to show you a bit of the back because the top is all untucked and adorable. The whole thing is one piece – the little white shorts don’t change (and why would I want them to, anyway) but the pretty, silky top can be changed to a bunch of different colors with the included HUD. To get the gifts you’ll need to join the free Designer Showcase VIP group and locate Lavian&Co’s set up at Designer Showcase. There you will find the 4 free group gifts that I mentioned earlier.

I love visiting exotic locales… and this dress by LaVian & Co. [SamJones] with its toucan on the hem inspired me to seek out something a little more unusual. What I ended up discovering was a tiki treehouse tea house… forest and waterfall included. It’s a pretty fantastic set up and area. You may want to check it out some day if you have some wandering hours free in Second Life.

My dress is a really amazing 10L find on the LaVian & Co. Cart at the Cart Wash Sale. You’ll get all the standard Sizes as well as fitmesh sizes, and fits for the Maitreya, Belleza, Hourglass, and Slink bodies. It includes a color change hud for 27 different colors… that is a LOT of dress for your 10 little Linden!

My hair is a FREE SLB13 gift at Hairology. You’ve stopped by there and gotten the free cake, right? 🙂 This hair is “Mabel” by EMOtions. I love the sort of Flapper style to this look and think it is really cute. The gift box includes a fatpack of 20 colors, so you’re bound to find one you like!

I was doing a little writing for FabFree last night, when someone dropped off a package at the door. You know I couldn’t help but give it a little shake! I never did figure out what was inside… but I sure tried! It was one of those “Wait to Open” kind of things!

But this fun pose is one you don’t have to wait to open… thank goodness! I picked it up from the Eternal Dream Poses advent Calendar for just 10L. If you are in the group its FREE (you can also join the group for 200L and then all 24 advent gifts will be yours FREE as well as many future gifts and offers!).

Once I was done trying to trying to have a premature peek into my giftie, I remembered that I had some fashion finds to share with you. I stopped by Christmas on 34th Street earlier this week and found four piles of presents under four different trees (look in the four corners of the sim!) and put together my usual mix and match look! My go to full get together evening starts out with this classically lined suit by [LaVian&Co] called RedLabel Under the Boardwalk. I love the wide belt and striped lapels. It came in all the standard sizes as well as fitted mesh… and if you look in the picture below you will see that you can also take the jacket off because it includes a stunning Maitreya applier top in black for additional versatility. Can you believe all this was only 10L as a great gift under one of those trees? Score!

My luscious jewelry was another 10L score by Beloved Jewelry. This Mishka Set would be perfect under any gal’s tree! The detailing is fabulous on the necklace and earrings and better yet? Color change! Yes! Can you believe it? And again, for just 10L!

I wasn’t done with my gifts yet though. I also picked up this sexy updo by Analog Dog Hair called Enja. It comes in two parts with the bun on top and the curls around the face that fall over the shoulder just so. For 10L you are getting a full fat pack… that’s hard to beat! And this sexy style is perfect for day or night either one!

I knew I needed something for my feet, so I snatched up these stylish White Satin Stilettos for Slink feet by Lowen, another 10L find under one of those Christmas trees.

My pose in this picture is yet another Eternal Dream Poses advent giftie! Yours again for just 10L or FREE with your 200L group join. (Plus I needed some hot cocoa after all that gift snooping!)

Had you noticed how in my first picture the top under my jacket was white? I just love it when I can mix and match! Though the [LaVian&Co] suit comes with a gorgeous black undertop (shown in my second picture) I also nabbed this trio of lingerie by Blacklace from under one of the trees. For just 10L you get all three colors in the gift box and I found that the white looked especially nice under the Black and white suit.

My pose in the picture above was another 10L gift you can find under one of the trees. Snatch up this sexy set of stands by oOo Studio called Winterkiss. The box includes three poses for Second Life photographers.

So, I packed a lot into that post! But I hope you found something you liked. I’m going to get back to the hot cocoa and snuggle up with some blankets by the fire! 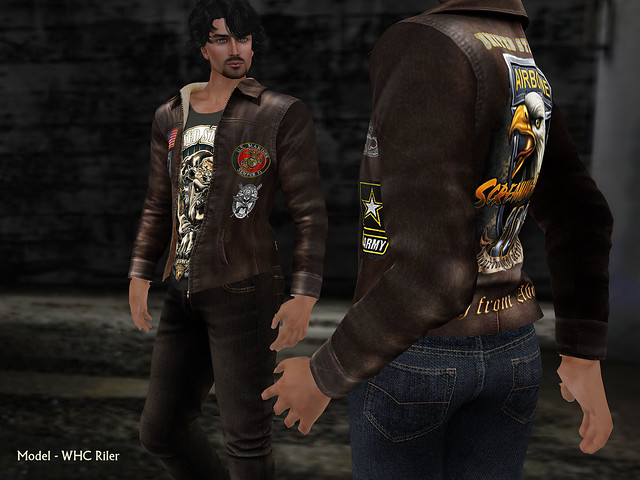 Next Wednesday is Veteran’s Day, a time to honor everyone who has answered the call to serve their country in the U.S. Armed Forces. Just in time, LaVian&co has a great set of military inspired outfits offered in their men’s group gifts. LaVian&co, renowned for classy women’s clothing with a high-end sense of style, has entered into the men’s clothing market with the new LaVian Male group. Like its sister group, the men’s group offers a huge selection of free group gifts. At the moment, the group join will set you back 99L, but if the group follows its sister group’s business model, you can anticipate the group join will eventually climb, making it a likely bargain at this price.

Several of the group gifts are worthy of mentioning here (after all, I did pick up thirty-eight group gifts). For now, I will concentrate on my favorite outfits; those which salute the United States Military. There are five outfits in this series, each one devoted to a branch of the United States’ Armed Services, including The Coast Guard. Each outfit consists of a brown leather jacket with appropriate patches on the front and an extremely eye-catching full color graphic on the back. On the left in the above picture, you see the front of the US Marine Corps jacket and on the right a side view of the Army jacket. I chose that side view so you can see the patches on the front and a hint of the beautiful graphic on the back of that jacket at the same time. The best way to appreciate these jackets is to click on them twice and see the full-size images in my flickr. 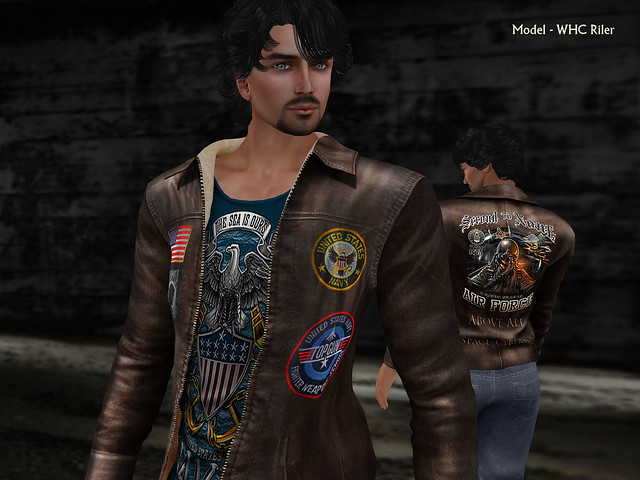 In the second picture, you can see the front of the Navy jacket along with the fantastic T-Shirt texture. These jackets all come in five sizes, including two fitmesh sizes. They can be worn with or without the T-Shirt. Next to the Navy jacket is the back of the Air Force jacket in full color. This set of jackets has some very awesome artwork. Even if you aren’t American, or have no interest in military matters, this series of group gifts is a great pickup. Each of these outfits comes with a very nice pair of Mesh Jeans in five sizes, an excellent addition of classic jeans to any man’s wardrobe. You get great basic men’s jeans in four colors (one color is used twice) even if you don’t care for the jackets! To round out these group gifts, they even include a pair of military boots. This is a fantastic set of gifts!

I strongly suggest you go take a look at LaVian Male. The group join is steeper than I usually care for, but for the number of group gifts you get, plus the likelihood that there will be many more in the future, 99L is likely to be a very good investment for most male avatars. Take care everyone and I’ll see you on the grid!—–WHC Riler

Hey Fabulouses!  You have just four days left to visit this round of The Designers Showcase and you’ll want to set aside some time for a visit because this round they have three free group gifts for their inworld group members!  One gift is by Entice, and the other two by LaVian & Co.  Don’t miss out! 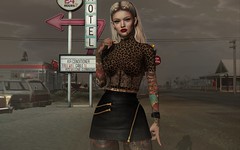 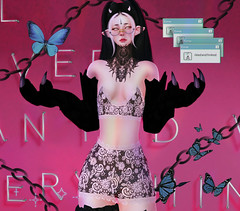 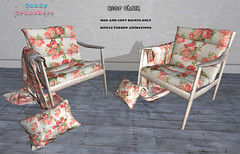 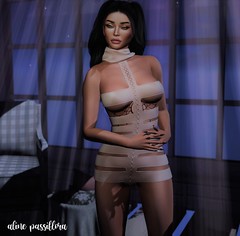