It’s Friday again and you know what that means here at FabFree! Today is the day we feature one of our “Fabulous”, generous and talented Designers!  This Friday I would like to share news about Snowpaws, who has a PLETHORA of gifts in store for you!

Carrie Snowpaw of Snowpaws who has been a resident of Second Life for nearly eight years, has been designing virtual ladies fashion under the Snowpaws label since 2009.   At her expansive, easy to navigate inworld location you will find classy feminine designs for all budgets and body types!  At the main landing point you will find her new releases, event offerings and free subscribe gifts!  (Make sure you slap that subscribe so you are in the know of future sales and gifts!)

When you venture inside a little further into the store you will find over 30 group gifts that you can pick up after joining the inworld group for 150L as well a wall full of lucky boards, midnight manias and mini mania offers.

I know.. it’s crazy right?  But.. that’s not all, because there is also two more walls of completely free ladies fashion items for filling your inventory up with!

I’m sure you are thinking that this is WAY more than you thought could be possible for free at a store, but also not pictured are more lucky chairs, and slap & dashes as well as other group offers including our own Fabulously Free in Second Life group gift which was blogged by Moira Serenity [HERE].

Before I head out and close off this blog post, I wanted to also share a stunning machinima video made by Carrie Snowpaw.  The dress and video are simply serene!

Olgita Ruby of House of Ruby has joined our listing and has generously donated a smoking hot gift for the guys!

“You can stay in if you like, Lazypup… I’m going out!”

Hey there Fabulouses!  Poulet Koenkamp of Purplemoon Creations is spoiling her inworld group members again with another instore group hunt!  The Keep Calm & Give Me Candy Hunt 3 began on October 18th and runs until the end of the month.  There are 10 hidden mermaids in and round the sunken ship as well as Phillip to search for.  I was running short on time when I went down there to hunt and didn’t find them all yet, but I found a few, and totally plan to go back and find the rest!  If you aren’t a current member of the group, it’s just 50L to join and these hunt prizes are well worth that!

One of the prizes I picked up is the super sexy Alana Dress in a royal purple denim with gold stitching.  This dress comes in Maitreya, Belleza and Slink mesh body sizes as well as regular mesh sizing and fitmesh with the co-ordinating alpha layer for those that are on the system body.  Such a great prize, and I really must get back there soon for the other prizes, but first I wanted to tell you about these cute shoes before I do!

You can find these adorable  strapped 2016 Halloween edition shoes at Empire for just 1L.  These come with a texture change HUD that allows you to change plenty of little pieces on the shoes with a few different colours in time with the season, for example gold, orange, purple and green.  Even if bright colours aren’t your thing, you can make these all black – so they’ll be fantastic even after the bit day of bumps and jumps is over.  These are compatible with Maitreya, Slink, Belleza and TMP mesh feet.

You haven’t forgotten the Fall Fun Photo Challenge have you, FabFree?

With the Fall Fun FabFree Photo Challenge ending October 31st, there is just a little over a week left to get in your pictures… but there is still time for you to get your contest entries in!

We already have some amazing photos in the contest. Why not take a look at the FabFree Photo Challenge Flickr Pool at some of the great entries so far?!

Then charge up your cameras and head out into the leaves… spiderwebs, pumpkins, wheelbarrows… whatever says “Fall Fun” to you and get cracking and get those photos in!

If you haven’t already, take a look at the “how it works” then get those shots into the FabFree Photo Challenge Flickr Pool between October 1st and October 31st. Our winner and a runner up will be chosen as soon after as possible. Make sure that you have “FabFree Photo Challenge” somewhere in the title of each picture and at least one absolutely FREE item in your picture. Then, please be sure to credit the FREE item or items so we can include your shot in the contest.

This round of the photo challenge is hosted by the amazing creator Petite Mort who has generously offered to donate the prizes!

1,000L gift certificate to Petite Mort for the winner, and

500L gift certificate to Petite Mort for the runner up!

Rules:
1. Your photo must contain at least one absolutely free item. Please put the free item’s name and Designer’s or Shop’s name in the comments section of your photo.

Like this -> “Free thingy” by A Talented Second Life Creator or A Cool Second Life Store.

2. Please keep your photos family friendly (eg. no naughty bits displayed, no graphic violence, nothing you wouldn’t see in a PG rated movie).
3. You may enter as many times as you like.
4. Most of all – have fun, and don’t be afraid to enter. Everyone from all photography levels is welcome to participate. 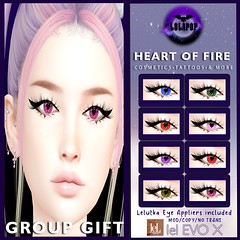