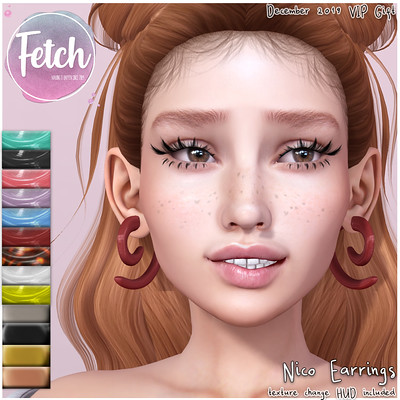 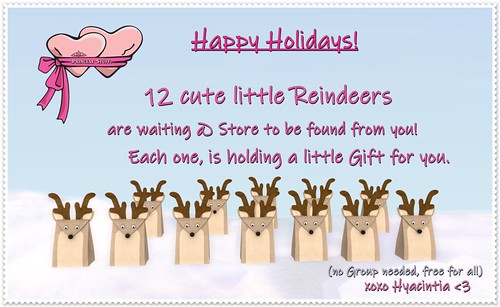 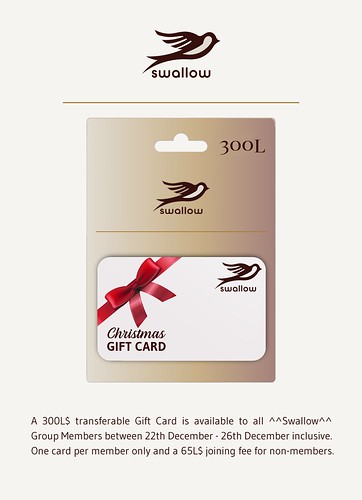 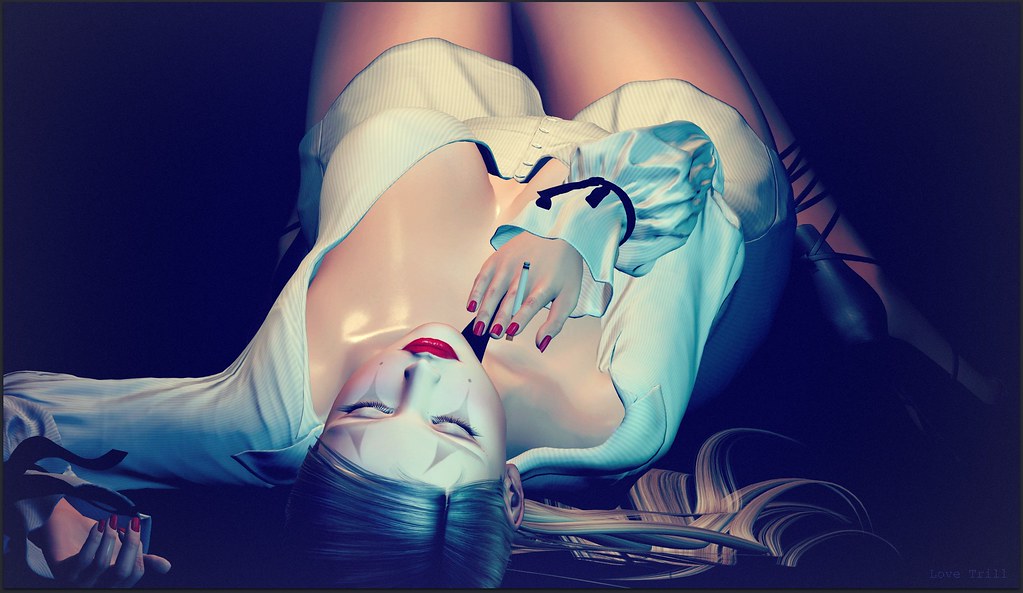 Hello there Fabulouses!  I stepped out of my skin today (can’t say that in RL!) to show off a really cool skin by Glam Affair that you can pick up at the brand new round of Kustom9 for an amazingly low price of just 9L.

Stepping out of my skin, and into Pepper

Kustom9 is celebrating an anniversary, and with that… several of the designers have out special 9L offers!  At the Glam Affair display you’ll find the Pierrot skin for Catwa, based on the new released for K9 Pepper face in tone 004, priced at 9L.  I am wearing it on Catwa’s Catya mesh head, but it may fit on others as well.. give it a try!

This sultry bento pose called Bento Freebie 2 is available for just 1L in Lyrium’s Marketplace store, including a mirror pose as well!! 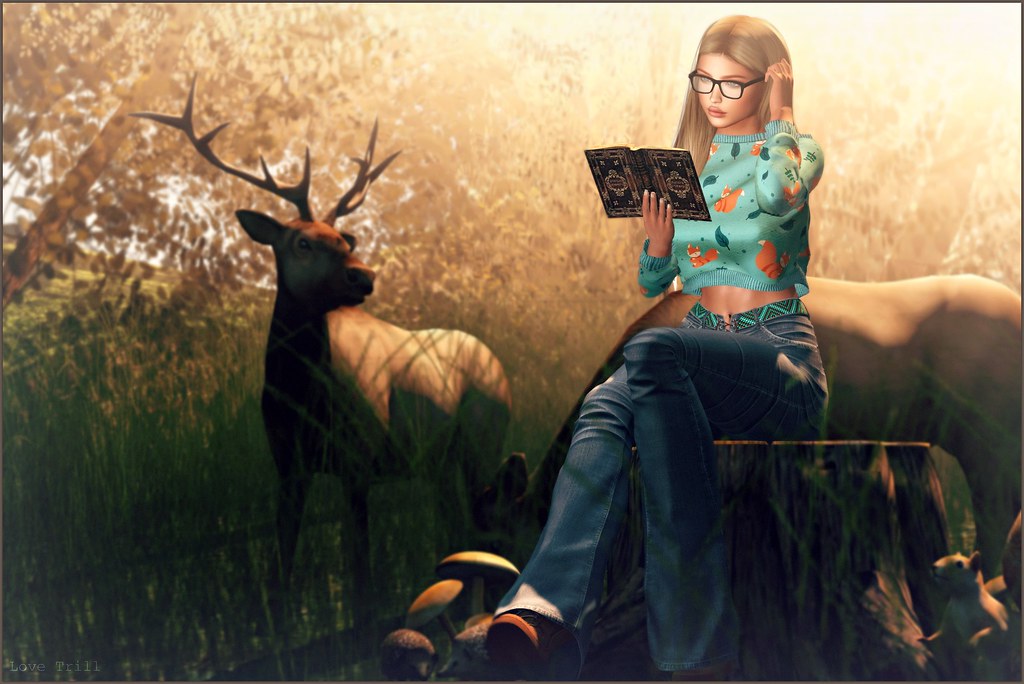 Hello there Fabulouses!  Ersch has just put out a new group gift for the fall season and it’s so cute!

When you become a part of the Ersch inworld group, you gain access to a whole section full of free group gifts, including the latest group gift addition which is the Cozy Autumn Sweater you see me wearing.  You don’t just get this super cute fox print though, there are actually six different prints!!  This sweater is fitted exclusively to Maitreya Lara, but it may work with others using the mesh body alpha huds.  There is a demo in store to try it first to make sure you want to join the group as there is a 75L join fee. 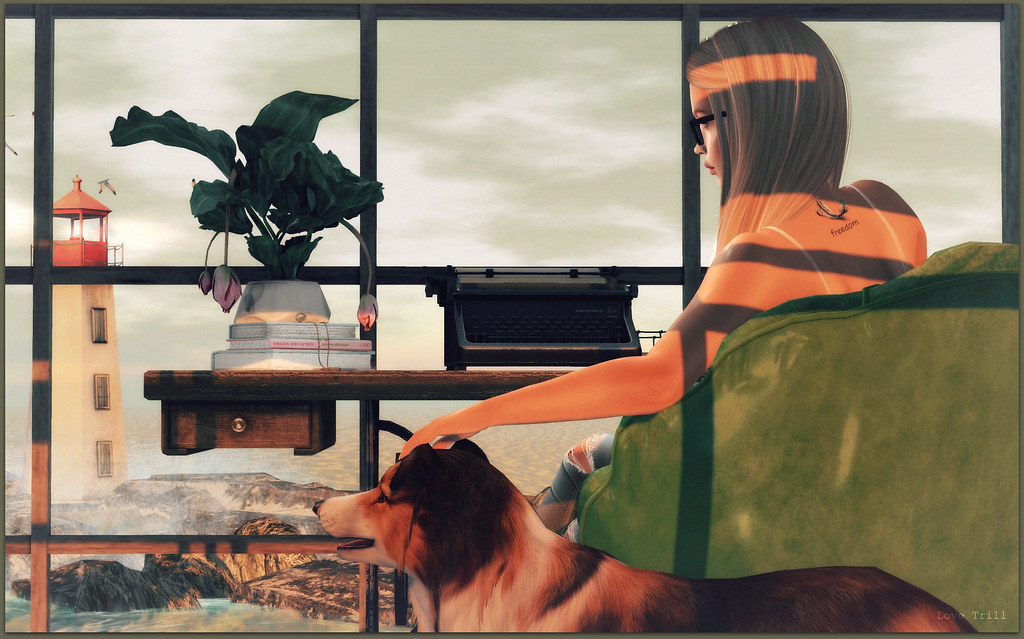 Hello there Fabulouses! Today I come to you with news about a little freebie that I thought was really cute!

Freedom!  You’ve gotta give for what you take

A few months back, I joined the Carol G. inworld group and I have not been sorry I did!  I stayed in this group and have been picking up new tattoo group gifts on a fairly regular basis!  Recently, the Freedom 3D Tattoo was sent out to the group and it’s really cute!  It does have the appearance of 3D and looks adorable with this new Navy & Copper Triffle hairstyle (available at Shiny Shabby) that is pulled forward off the back onto the shoulders creating the perfect landscape for a sweet new tatt such as this!  The Carol G. inworld group is 150L to join, but like I said…  I haven’t been sorry about paying the fee!  Sometimes you have to give a little to get a little. 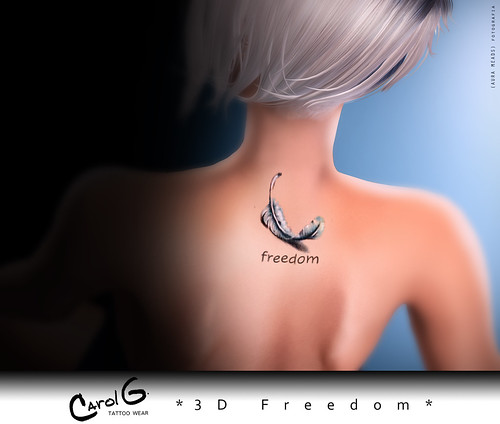 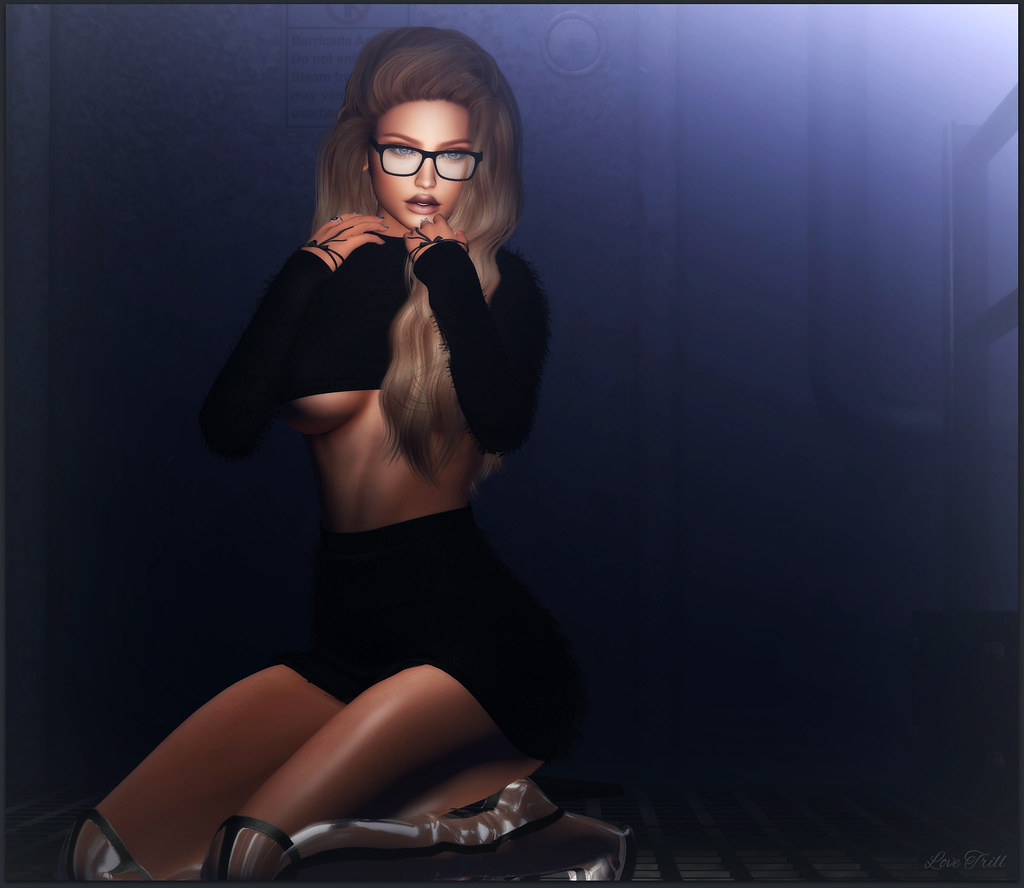 Sometimes you gotta be a beauty and a beast ~Nicki Minaj

Good morning FabFree Readers! I don’t listen to a whole lot of Nicki Minaj, but I did borrow her quote because I love it!

Today I have news about a new group gift at Scandalize!  The other day, the Velure set in black was added to the giant wall of VIP gifts.  This set includes the Velure Skirt and Top in both plain and fluffy versions.  I went all out and put on the fluffy version, and I tried so hard to shoot this photo in a way where you could see all the cool fluff, but it’s really one of those outfits you gotta see inworld to do it real justice!  It also includes a belly chain which you can custom texture (not shown in my photo, but you can see it in the vendor ad below).  This group has a 100L group join fee for those of you that are not already in it. 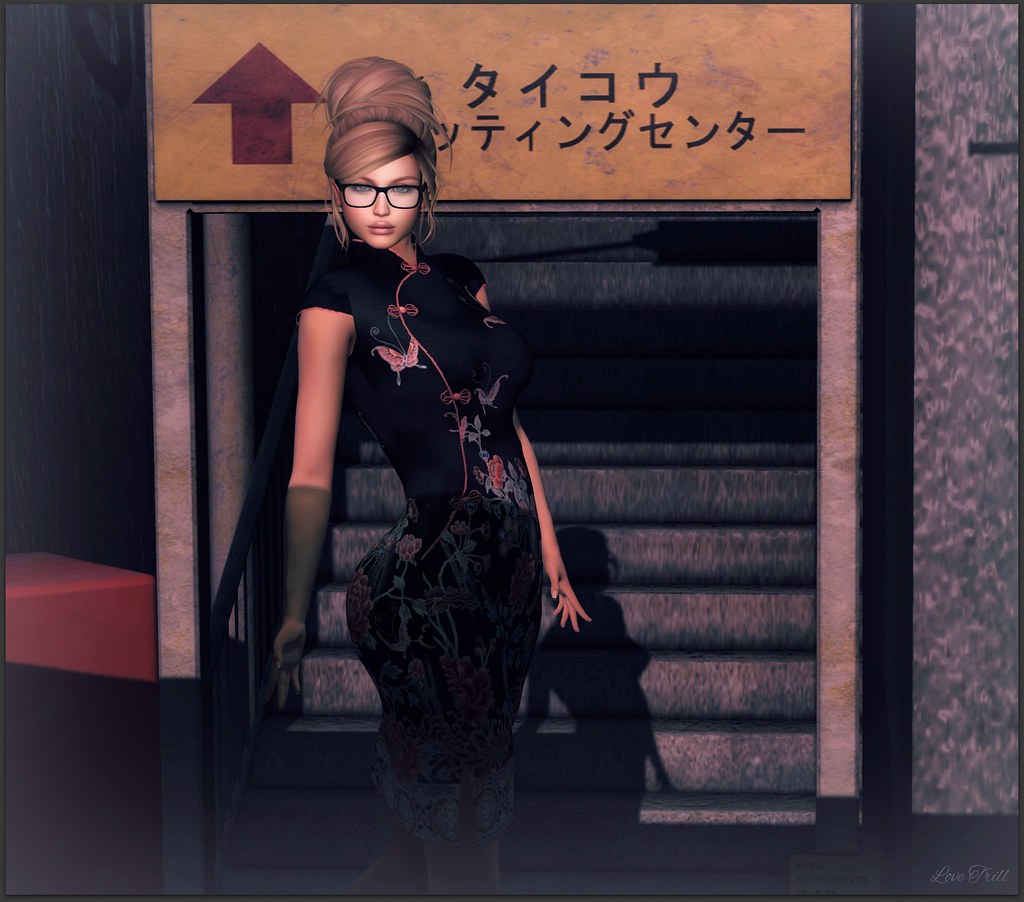 Hello there Fabulous Readers!  I am returning with more news about a sweet item I found at The Wash Cart Sale!  I don’t know if it didn’t rez for me the first time I went around, or if this is a late add-on to the Emerald Couture display, but last night while I was taking a walk around the block (The FabFree Info Hub is on The Wash Sim!), I noticed this beautiful Asian inspired dress hanging  there in all it’s glory!

The silky textured Cheongsam Butterfly dress is just 10L, as is everything at The Wash’s Spring Is In The Air Event.  This dress is available in the black butterfly print or in a green print as well which you can find in the basket on the ground – also at 10L.  Whatever your body type…  There’s a size for it – as you can see from the list below.

Hello there Fabulous Readers 🙂 What do you think of my painting?  In real life, I love art but unfortunately I am just not very good at it.  In Second Life, I’m practically a pro as you can see.  In fact, I can do a lot of things better in Second Life like dancing, wearing stilettos, dancing while wearing stilettos, flying airplanes and dressing myself for free!

Never in real life do I get so lucky as to come across a pair of adorable overalls with a top as a free gift for joining a group.  It just doesn’t happen.  It totally should 🙂

Anyways About The Outfit…

You can find this overall and top outfit set called Nell Overalls as a free group gift at Moolala.  It comes as one piece (top and pants together) in a handful of mesh sizes with an alpha layer and a HUD that allows you to  make a few changes to the denim colour, as well as several colours for the dotty tank top.  The Moolala inworld group is 25L to join.

Evening FabFree! It’s been a busy weekend for me, but I dropped in to share some special treats with you… a little bit here… a little bit there! It all adds up to something colorful!

This round of Hairology wraps up June 30th, so if you haven’t stopped by to get all the FREE SLB13 cake gifts, you should hurry. Tonight, I’m showing you the gift from Iconic. It is a high and sleek, mesh pony tail that is really stylish. It’s a full fatpack of colors, so don’t miss out.

My mesh LBGT Pride shirt by GetDressed is a lucky 9L find on the marketplace. It comes in all the standard mesh sizes and its own alpha if you are using a standard system body. I liked the loose fit and the unique texture on the material of the traditional tank top cut.

My pretty manicure will only set you back 10L at the Cart Wash Sale. You still have time to get in on the goods at the Cart Wash! This manicure is by New.Monday and called “Flower Power”. It features flowers on your nails. For just 10L you get 3 colors for Slink nails. There are a couple of other pretty manicure sets out that you’ll want to check out!

I also picked up my Pride paws body paint at the Cart Wash Sale courtesy of the same Cart. New.Monday has set out the Pride Paws in either a top or bottom layer for just 10L each. So if you want only one or you want both, it’s up to you! You have the flexibility! This body paint is system layer only, but definitely worth rocking you system body for!

My shorts are another great find at the Cart Wash Sale (I told you I was giving you the goods this evening!). You’ll find this great pair of high waist shorts at the Vicarious Youth Cart for just 10L. They come in distressed Denim. I found that they ran a little on the small side, so I did have to wear a larger-than-my-usual size, but they are still a great fit!

It’s Kustom9‘s birthday! Woot! Woot! If you’ve not been by to check out the celebrations and pick up the goodies there, head down! TETRA is giving away this cute Lace Crop Top in two colors for just 9L! Just buy the birthday box for 9L and you are set up slick with both tops — scarlet & white (shown above) and scarlet (shown below)!

You really can’t go wrong with a simple classic look — versatile, elegant, all season. Don’t miss out on these treats! 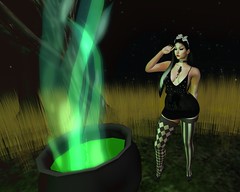