Hello Fabulouses!  How sweet is this heart printed cami top with the tiny satin bow in the center?!  I know – totally cute.  This Nikki Cami is free too and it comes with a HUD that allows for six different colour choices! Sizes included are Maitreya, Hourglass, Physique, Isis, Venus & Freya.  You can snag this free group gift at Enertia when you join their free inworld group!

Make sure you pay close attention to my hair and twig crown today too, because they are also FREE!  The Lakewood Haven Sim is hosting a hunt with 10 hidden prizes – (mostly women’s hair, hair accessories and home décor) until the 10th of October.  One of the awesome prizes is the Pr!tty Navi Hair that I am wearing today in a full fatpack of colours and  additionally including the twig crown.  Some of these are pretty tricky to find, but let me say… ALL of the prizes are awesome and you won’t be upset you took the time to find them!

Sometimes all you need is a little makeup and a change in eye-color to change your look in a dramatic way. Using eyes by S0NG that I picked up at the Crossroads event, and makeup from the 50 Shades of Catwa Hunt happening at Indulge Temptation, I was able to take Pru’s look from slightly sinister to sultry. Pru’s wearing the same head, hair, and base skin in both photos.

In my opinion eyes from S0NG almost always have an otherworldly look to them. The Nyx eyes gacha by S0NG at the Crossroads event is no exception. These eyes have that signature glassy look S0NG is known for, and come in a huge variety of colors that range from natural to unnatural and everything in between. These sparkling eyes are available for just 55 lindens per play at the Crossroads event. Included with each pair of eyes is a mesh set of eyes, a matching alpha, and a system layer set.

The dramatic eye shadow and intensely colored lipsticks are just a few of the 50 total Catwa makeup appliers you can hunt down during the Indulge Temptation 50 Shades of Catwa Hunt. The item you’ll be hunting for is a little Catwa logo. Each hunt prize is 5 lindens and includes a single shade of lipstick or eye shadow. There are no groups to join, just head over to Indulge Temptation and enjoy the hunt!

The Men Only Hunt 8 has begun and gentlemen the Month of October is definitely our month. This hunt is already looking fantastic. I made my first stop at American Bazaar and was pleased to come away with this FREE Native Sweater with attached scarf. It’s perfect for the season of change and changing leaves. Just find the beer icon and buy it for 0L and this sweater in all the standard men’s mesh sizes as well as a special Slink size is yours. 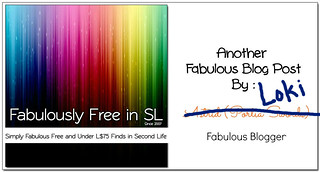 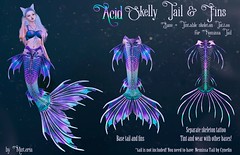