Gong Xi Fa Cai, my dears! And for the non-Mandarin speaking FabFree-ers that’s -> congratulations and wishing you prosperity!
Today is the Chinese New Year ushering in the Year of the Goat: a year of luck and prosperity for everyone. And if you were born in 1979, 1991, 2003 or 2015 😉 You are especially lucky, peaceful and kind! 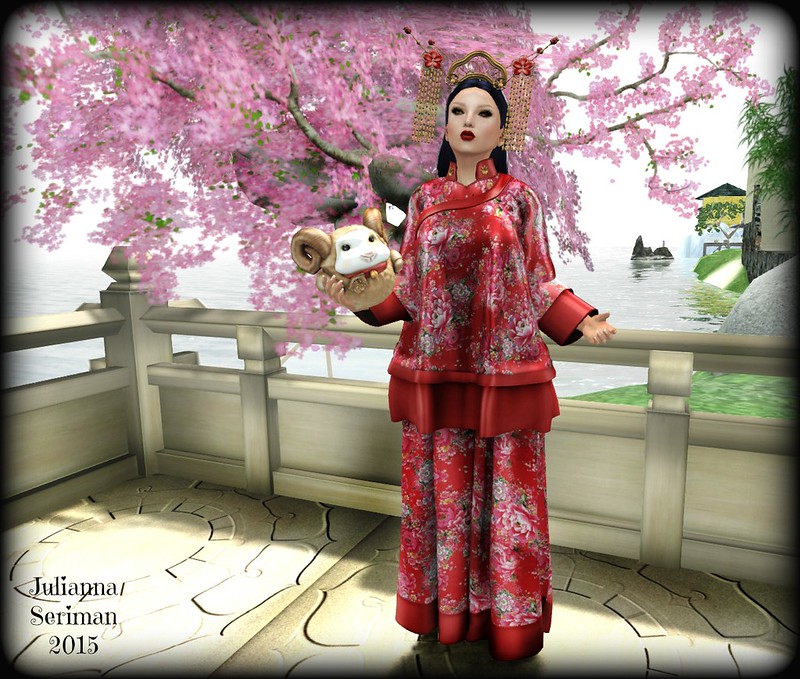 One of my ‘go to’ designers is Zenith Fashion and they haven’t disappointed me today. This is the 2015 Chinese New Year Dress Group Gift by Zenith Fashion. This lovely dress and crown comes in both pink and red. I chose red since it’s the color of luck, happiness and prosperity, and it is also used to fend off misfortune. Along with the gorgeous dress is a second Group Gift: this little cutie the 2015 year of the Goat Doll! You get three little goats in different sizes in both wearable and rez versions.

Zenith has a bunch more past group gifts out for pick up and the group is free to join!  So Happy New year to all, may your RL and your SL be blessed with happiness, luck and prosperity!

Location – A Refuge for Peace in a Chinese Garden

Happy Saturday, Fabulous people. I took a turn through the Arcade today and picked up a bunch of cute things I didn’t even know I needed! I wanted to show you two gifts under the Arcade Holiday tree. 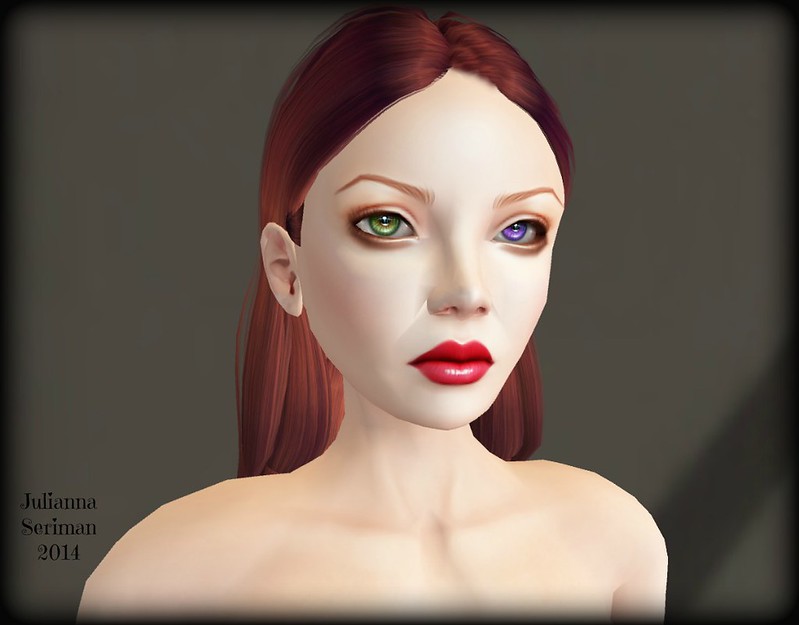 Now, we’ve already seen the skin from Glam Affair here in Tiana’s post. But I thought it was worth showing again on a different shape. It’s amazing how your shape can change the look of a skin. This is the Leigh shape from [The Skinnery] and it’s free under the Arcade’s tree. I love the softness of the face and especially the shape of the eyes. I am wearing an alpha to hide my system eyelashes so you can see the details a bit more clearly.

Juli is going au natural in – 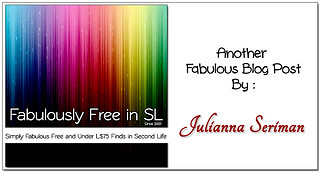 I have to admit: this is my favorite time of the year. Autumn is fading out in a blaze of glory and winter is just waking up.  The Winter Love Hunt is just my cup of tea… or hot cocoa. 🙂 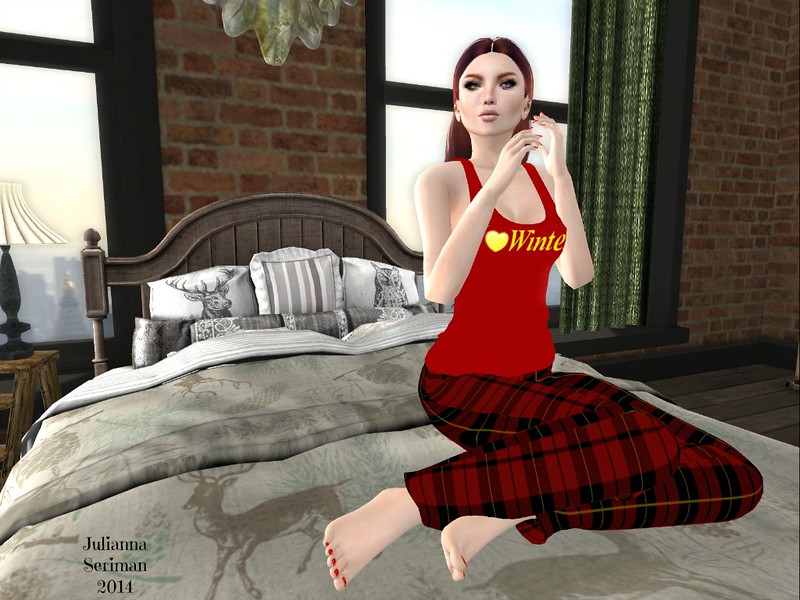 This is a 0L hunt with twelve stops and a load of fun festive gifts. It runs from November 5th until December 5th. First up is Perfect Seduction and this pair of cozy jammies. The tank and lounge pants are one item so you can save on alpha space. I love the cheery red! I’m also wearing Little Bones ‘Feline” hair style for a ‘down time’ look. Feline is one of the past group gifts from Little Bones (still available in store) that Pru Rexroth showed us here.

I also found Lushish Catz’s Winter Blue sweater and snowflake jeans.  I paired them up with Pure Poison’s Winteria necklace which was a past group gift. But if you like it, it’s still available ( along with a ton more free group gifts) at the Pure Poison main store. My hair which is getting full of snowflakes here, is Olive’s ‘Flutter’ hair from the Gacha at the main store. We first saw this gacha prize in Skyler Glasswing’s post here. 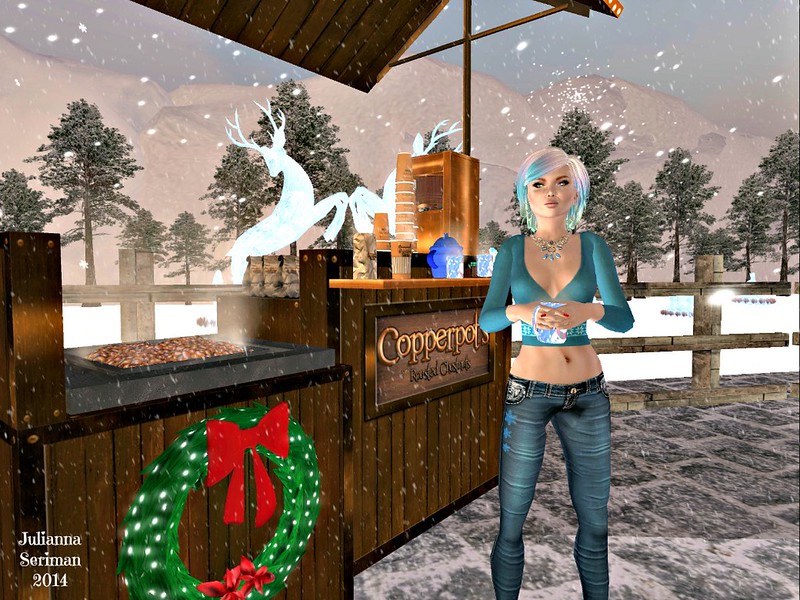 Lastly, something a little fun and different. Ready to play Santa’s helper this Christmas? Siren’s Moon has got the perfect outfit for you!  It comes with the boots, the shorty dress and the jaunty Santa hat. I love the flirty snowflakes ‘falling’ from the skirt! Just the thing to pass out Christmas Cookies in. 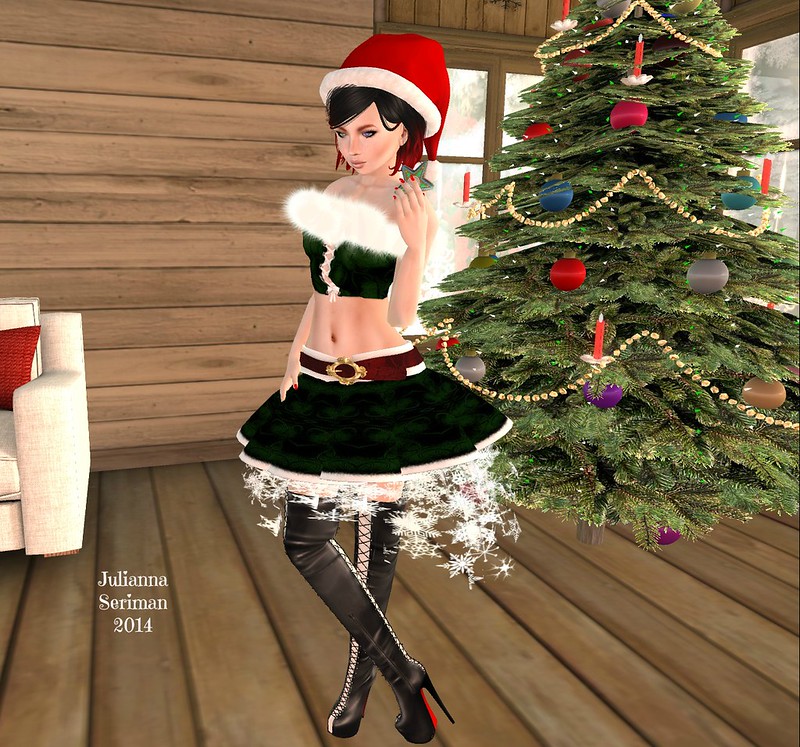 Juli is dodging snowflakes in – 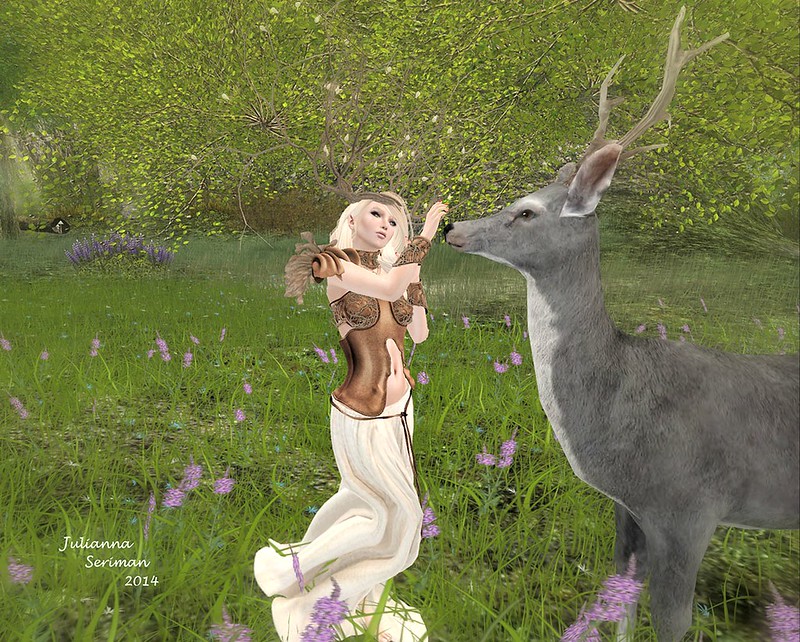 I have just returned from a far away land of Gacha and I come bearing many splendid treasures for you, fine gentle folk.

Okay, imagine I was saying that in a fancy Olde English accent!

The Fantasy Gacha Carnival is open for business and there actually ARE many a splendid offing there. Eighty one designers have come together and set out some very fine fantasy gear for us this November with most offering two or more gachas. The Carnival runs until November 30th so you only have a little time left to get your Medieval on! You can check out the website for a preview here. One of the best things about this Carnival is the ton of men’s items here. Many of the vendors offered both male and female selections or unisex items.

First up is Zenith’s Druid. I love the wooden vines that twist and curl around the upper armor and bracers. Zooming in shows the delicate texture of bark and twigs. The simple linin skirt moves well and sets off the detailed leather works.  I was lucky enough to pull both of the rares on this machine! The branching crown AND the two handed wand. I was thrilled to find a “new to me” hair vendor at the Carnival! I’m wearing Blues’ hair in ‘Grace’ 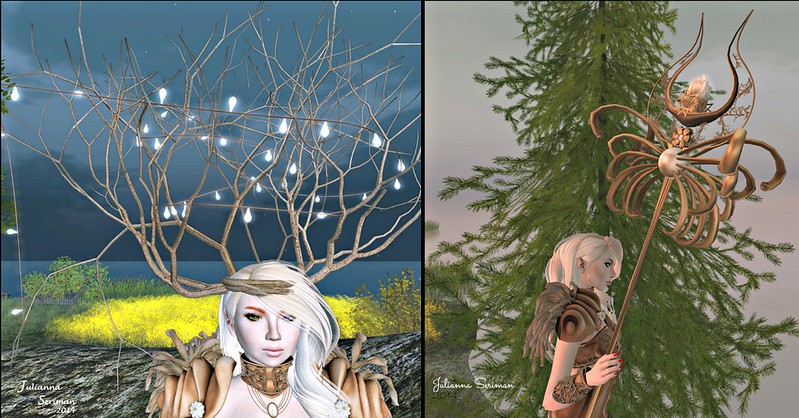 Next up is a Ranger outfit from !gO!  I didn’t pull the rare but I was lucky enough to get the jacket and the skirt in the same color and style. !gO!’s booth has both a men’s machine and outfit as well as the girl’s selection. The pose is from Rack Poses and their “priestess” gacha. There are six common poses and one rare couple pose. They all come with the eagle prop! At 50L a play, I grabbed several.  I’m also wearing Little Bones ‘Ranger’ hair in the Landslide pack. 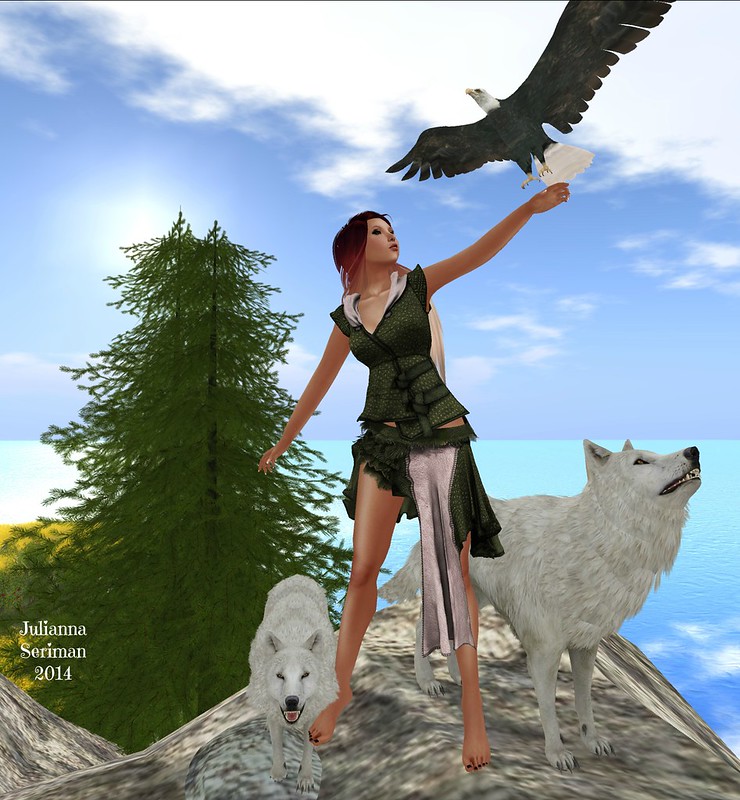 Lastly, I wanted to show you the rest of the Snow Queen set from The Annex.  In addition to the beautiful pearl earrings and chocker, this set has a pair of pearl ‘eye lashes’ and a diadem. There’s also a gorgeous crown but I wasn’t lucky enough to pull it. 😦  Maybe next time.  The gown comes in a plethora of colors so I just picked my favorites: Forest, Twilight and Calypso. 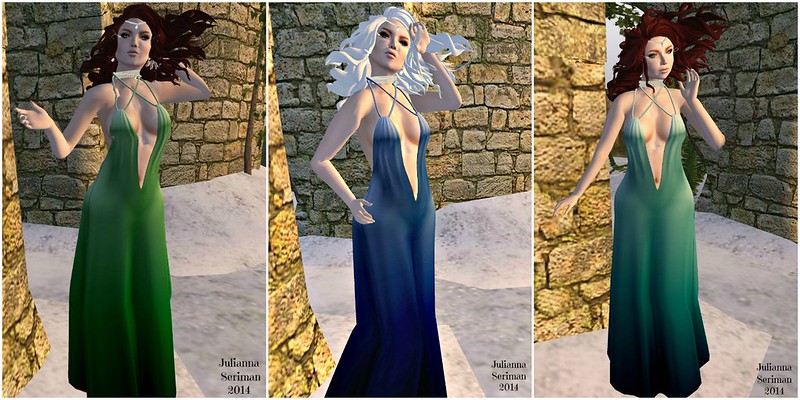 I’m also wearing Damselfly’s blowin’ around hair “Gretchen.”  The rare also comes with a set of butterflies woven into the locks. I love the dynamic of the piece. Sure makes for a great picture! 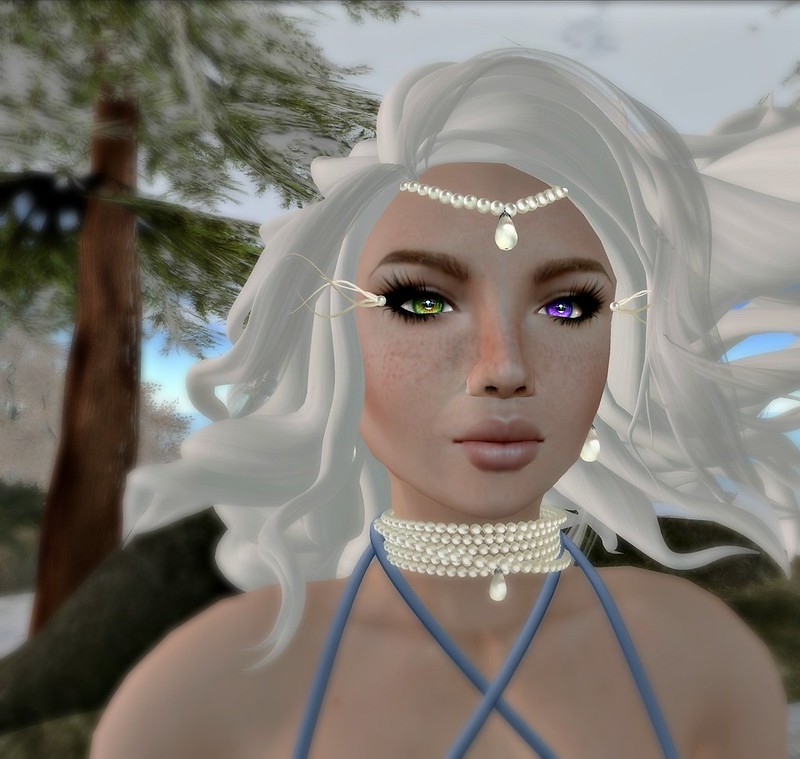 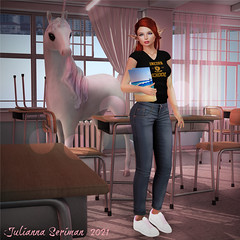 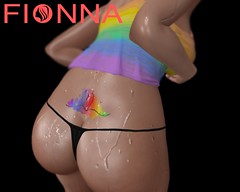 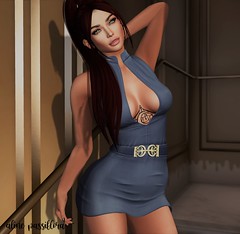