We managed to elude the remaining pursuers by driving down some abandoned train tracks on the wheel rims after shooting the tires out. I then re-inflated the tires with the big red button in the glove compartment, and then made an impossible jump over a washed out bridge (you would think my life was a movie or something.) The rest of our trip was uneventful – except for one unfortunate incident involving me accidentally pressing the ejector seat and sending Ms Muffin shooting  through the top of the car. She amazingly landed cat-like on her feet. We reached the Russian spy’s hide-out in a remote beach cave. We approached quietly, not wanting to startle her and end up with a big, dramatic chase involving totally impossible leaps, grueling climbs up sheer walls, and harrowing hangs from window ledges hundreds of feet from the ground. Fortunately, we caught her while she was bathing in a nearby waterfall and she was unaware that we were there until we were upon her.

She was a dark-haired beauty wearing a white bikini that provided quite a view. I whispered over my shoulder, “I think I can handle things from here, Ms Muffin. I will meet you at the rendezvous later.” I approached slowly, gun out just in case.

“You need to work on your stealth skills,” she said in perfect English.

I didn’t bother to ask her how she knew my name. I did frisk her though, just in case she was hiding a weapon in her bikini. I then asked her if she was here to defect and she said she was but that she had been followed and it would be necessary to eliminate her pursuers before she considered working for the British.  She led me into her secret spy cave, where she just happened to have two prototype motorcycles and a pair of infiltration suits. We sped through the narrow streets of a quaint European village, the villagers  politely scattering to the side as we raced by. They must have been very happy to see us because they tossed us fruit and vegetables as we passed.

We tracked Miss Stuvall’s pursuers to a warehouse apartment building in the industrial district. The apartment was on the second floor so I asked Naughtya to wait for me while I scaled the wall using state-of-the-art-wall-scaling gadgets supplied by Q division. I gained the balcony and turned to toss a rope down to Naughtya but noticed she was no longer on the ground. I shrugged and spent several unsuccessful minutes trying to gain access through the door  using every technique I knew before I heard a “click” and the door opened to reveal Naughtya standing there smirking, “Having trouble, Mr Foxdale?”

I smiled weakly and we searched the apartment using standard spy casing techinques but it appeared Naughtya’s pursuers had fled. We returned to my spy hangout and I welcomed her to the team using standard spy welcoming techniques. “Ohhhh… Calgon…”

Motorcycle – Prototype by BC Custom Bikes and Design

The Dressed by Lexi Naughty Nurse In-Store Hunt ends in just three days (November 14th), so make sure you check it out before it’s over!  There are 7 medical bags hidden throughout the store, priced at 10L each.

Be sure to check out our SL Hunts Page at the top of the blog in tabs for a list of current running hunts!

I saw her across hazy atmosphere of the room, dancing on the bar.  She had unfettered  blond hair, a smile that could disarm a mercenary and legs that went all the way down to the floor. I was there to meet a contact for my present mission and I had a few minutes, so I figured I would use it effectively.  “May I join you?”

She looked me up and down and replied, “it would be my pleasure, Mr….?”

“Foxdale… Calgon Foxdale, and the pleasure is all mine, Miss….?”

“Of course you are,” I smiled back and offered my hand to help her down from the bar and into a nearby chair, then I took a seat next to her. I scanned the room, trying to spot my contact and then engaged Ms Muffin in conversation. During the course of the evening I discovered that she was my contact and looked forward to the possibilities….  Our mission was to locate a Russian operative and turn her. Love had already located her, and it was my job to convince her to come over to our side. We worked out the details and spent the rest of the evening enjoying ourselves (which included a really big bottle of champagne) before retiring to her apartment.

The next morning we were on our way to the car, when we were ambushed by operatives hiding in the bushes. I had left my gun in my other pants so I quickly jumped behind Love (I couldn’t risk getting blood on my tux!) She made short work of the bad guys (she’s almost as good a shot as me) and we sped off to our destination with the Russian operative. Love and Cal will be back in the next post to tell you what happened next and to cover more stuff from the Shaken Not Stirred Hunt! Stay tuned!

The group gifts at Glam Affair and the 7Seas Fishing Outfit at Sn@tch have me feeling all kinds of goth, even after Halloween!  The pale, freckly skin and white eyes shown above is called Unnamed, and after you join the Glam Affair inworld group for 30L you can snag the awesome duo for free in notices.  Also in the notices you will find the Halloween Gift which is shown below.  Renee showed this skin a couple of weeks back, but if you missed it – you can grab it in notices now!  The eyes are not included…  They are IKON’s brilliant and newly released (not free) Eternal Eyes in Pool.  They do make you want to swim around in them don’t they? 🙂

As I mentioned earlier, I did a little fishing this weekend at Sn@tch in the 7Seas Pond and picked up the Four Years fishing prize that includes the two complete outfits shown below including the boots and jewelry too.

I recruited Calgon to help me catch these pieces a little faster because they are transfer and he was kind enough to join me…  You know what he told me?  I am taking a risk of looking like a total dooooofus by sharing this “Classic Love Trill Moment” with you, but there have to be some people out there who haven’t noticed the dang feature either!

Thanks Calgon, for helping me catch those fish! 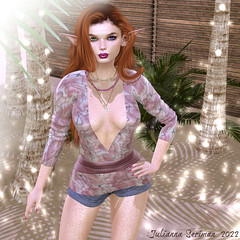 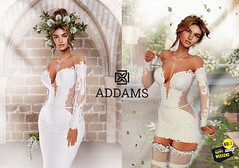 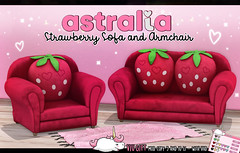 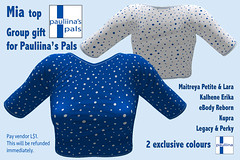