Are you in the *+*JILL*+* update group?  The *+*JILL*+* store is celebrating the first anniversary in SL and there are presents for the group!  I love it when the group gets presents cause they are sooooo good!

The black shimmery 1st anniversary dress is a free group gift at *+*JILL*+*.  The black Mid Calf Walking boots are in the lucky chair at Shoe Fly Shoes.  The lovely Katie hair isn’t free, but is half price at the half off sale at Decoy.

The black and orange jumper dress with black sweater and leggings is in the lucky board at *+*JILL*+*.  My favorite thing about this outfit is it can be worn anytime of the year, not just for October!  This dress definitely made a permanent home in my inventory!  The ROGE hair is perfect for this outfit!  The onyx Jully boots are free at Decoy.  This hair and knit cap is the new group gift at ROGE.  The hair and cap are color changeable!  Thank you Arvana for telling me about this one!

I woke up this morning to this wonderful treat from G FIeld.  This orange and black Halloween mini dress and black spider web tights was in the gift given to the G FIeld sub-o group this morning!  The Onyx Jully boots are free until October 12th at Decoy.  The pretty Eclatlight skin was given to the LeLutka group earlier today.  Pick up the adorable dollarbie Halloween pigtails at Kin.

Bliss Couture has some Halloween goodies for all you ladies out there!  The orange Nicole dress is free for everyone and the plaid Pumpkin dress is a dollarbie for Bliss Couture group members.  The black cut-out leggings are free for members of the COCO DESIGNS update group.  The black Leana heels are a dollarbie at Chuculet.  The Danina Pumpkin hair comes in all colors and is a group gift at Amacci.  The Daydream skin in the Cameo tone was sent to the Cupcakes group a few days ago.  There is a L$100 enrollment fee for the Cupcakes update group and it is well worth it!  The group constantly gets great gifts!

I know you must be in your limit with groups but believe me.. it is worth to join Valiant’s Group and get this sweater! It is such a well done one! Check it out!

This month is full of Halloween stuff! It is awesome how creative designers are for not being repetitive. Funny lollypop and hair from Concrete Flowers and so nice back pack and pumpkin sweater froom Kosh. Hurry up! It is only for this week!

Until the 12th of October, Decoy is having a sale on at their new Mainstore in Sunny. Huge signs around the store will point you to the Freebies where you can buy the items singularly in your favourite colour or scoop up the fatpacks – both are set at 0L. Not everything is free, some things are reduced to under 100L with most tops being set at 50L.

I went and took a wander around the store earlier this morning and I must say if you want to stock up on some really cute basics then this is the place to run to over the weekend.

+ Decoy Hooded Blazer Fatpack – 0L for all of these colours!

+ Decoy Zafina Dress – 0L Fatpack. This fatpack has 9 colours but each colour has a plain and multi skirt option as shown in this picture, which means you get 18 dresses!

And here are a few of the 50L bargains you can find there.

Other info:
+ Skin by Rockberry – Eva Group Gift
+ Hair by Magika – Style is Cake (Magika are having a 50% off Sale over this weekend btw – hair is currently 99L per colour pack! )
+ Freebie Glasses by Ottico 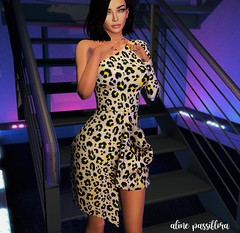 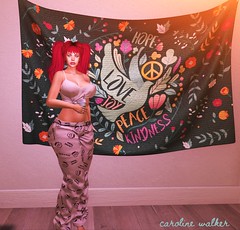