RibboN sent an adorably cute yellow Twig hoodie to sub-o members yesterday and I haven’t taken it off since!  When I saw the new lucky board gifts at RibboN I had to win them!  The red and black Mouse hoodie is the prize at the RibboN store on the Love Soul sim.  Our very own Love Trill was lucky enough to win the yellow and black Ribbon hoodie at the main RibboN store location.

All the pictures were taken on the beautiful New Toulouse Algiers sim.

Ever feel like you are having a Cinderella moment and cleaning up after everyone?  Well now you can look the part in the Sexy Housewife outfit from Viviane Fashion for the Helau & Alaaf Hunt.  I love the shading detail put into the blue dress and the rubber gloves and slouchy stocking complete this look.

Of course I have more gowns to show you!  The barbie pink Wena gown is a gift at House of Beningborough.

There is a starstruck Celeste gown for only L$10 at Made in France.  This gown is available for L$10 until March 6th, so get it while you can!  While there pick up the black lace gloves and feather earrings for free!

Paris Metro has a beautiful midnight blue Paris At Night gown on the 3rd floor desk.  This dress comes in two skirt lengths.  The Flighty February hunt gift is still available at Paris Metro until March 6th.  Look for the manic bug on the top floor, to receive the green/blue Glow gown.

I saw this white down jacket on Carson earlier and I had the female version.  The jacket is one of the many group gifts available at Gabriel.  There are many more gifts to pick up, mainly male items.  The Kimi Mukluks shoes, knit tights, and denim shorts were sent to the Sweeter Than Candy sub-o members a few days ago.

Head over to E!  Eclectic Apparel and Accessories and pick up the pink Sweetheart tank for just L$1!  Let them know how you really feel in the yellow “You Sooooo Suck!” tank.  This sassy tank can be yours with 30 slaps to the midnight mania board at SD Wears.  The black denim group gift jeans are some of my favorite from ﻿Cool Beans.  The Rope collar is the prize from Zibber’s Jewelry for the Gorean Grid Wide hunt.

After many many attempts to win the new Isolde Ice skin from the gatcha at Exodi, I finally have the skin to show you.  The Isolde Ice skin has glittery eye makeup and shinny lips.  The skin comes in the Cachet, Corneille, Nuit, Soleil, and Vivante tones.  The pack includes dark and light brows, cleavage, and freckles.  It costs L$50 to try your luck on the gatcha machine and you can win scarfs in every color and the Isolde Ice skins if you’re lucky!  The Belinda hair comes in every color imaginable and is the newest group gift at Zero Style.  I love nice flexi hair so was excited to get this hair!

I waited for a very long time to show you the new Court coats from the lucky board at SO What?.  The coats come in black, green, and brown.  I think I tped in just about everyone on my friends list to get these.  For my frame the coat didn’t need to be resized at all, so that was a major plus!  The lucky boards change every five minutes.  The coats look great on men too….  guess where my SO will be waiting tonight!

The short You hairstyle is one of the gifts on the table at Zero Style.  The hair comes in several different shades.

I seem to be on a lingerie kick lately and since my SO is away you get to see!  This time I’ve put away the pearls to show you the dollarbie Ace babydoll lingerie for the Nicky Ree update group.  To get this lingerie you must be part of the update group.  Click the group invite sign near the entrance of the store to join the group.

Also, don’t forget about the Valentine heels from ByKay.  The prim feet heels are so awesome, you can preset skin tones to match your most worn skins and there are tons of nail polish colors!  And the “I Love You” silver charm is the perfect accessory!  You have until February 14th to pick up this Valentine gift!

This beautiful bandage Evangeline dress from Seldom Blue is a special for a limited time offer at only L$100.  The exquisite Golden Butterfly and Feather Headpiece created by Singsong Writer is the perfect finishing touch for this ensemble and is a dollarbie!  The Oro pumps are from Bliensen + MaiTai for the Shoes & Accessories Hunt.

And check out the full priced version of the Evangeline gown at Seldom Blue!  Its stunning!  The version below is in the blush color.  There are many options to the Full Evangeline packs, but I’m showing the breathtaking gown!

While you’re at Seldom Blue try your luck on the lucky chairs.  I won the Destiny Capuccino dress which is very pretty!

When I saw the notice for this red and black knit dress from Bellissima I knew I had to have it!  The dress is in the midnight mania board and only needs 75 slaps!  With the dress you get a plain and a red heart flowers corset, a slim and poofy skirt option, a matching beret cap (not shown), and the most adorable red and black knit heels!  The black Seppel armwarmers are from Concrete Flowers in the Shoes & Accessories Hunt.  The brunette curly belted hat hairstyle is a Shoes & Accessories Hunt gift from IrEn.

While at Bellissima try your luck for this beautiful green Holly gown.  This lucky chair prize includes the gown, gloves, matching green boots, snowflake earrings and a necklace!  The long blong Laurel hairstle is in the lucky chair at Zero Style.  The Smudge Sasha skin from Adam n Eve is not free but sooo adorable with tear stain eye makeup and scraped elbows!

BTW, there’s also an awesome male midnight mania and lucky chair prize at Bellissima so drag your men with you!  I’m pretty sure Tarsis won the midnight mania gift so we may get to see it soon!

Sunday is a day that is great for staying in bed and just cuddling!  Maybe you are sharing your bed with someone special or perhaps that special someone is you!  Why not satisfy your Reasonable Desires while wearing sexy lingerie!

Also, check out the new Rosie lingerie sets at Reasonable Desires!  Reasonable Desires lingerie is hand-drawn with clean crisp seams that give each piece a perfect put together look.The Rosie lingerie is quite sexy too!  The lingerie is L$150 and can be purchased in black (shown below), pink, gray, nude, cream, blue (shown in top picture), or white.  The silver Genesis earrings and necklace were sent to the PRIMALOT sub-o group a few days ago and are a perfect accessory even when you’re wearing next to nothing!

The always very generous Ayanna Slade has decided to clean out the store inventory at Aqua and have a mega sale for the next two weeks, starting from 28th December and ending on 11th January.

Everything on the walls in the store will be on sale for 25L, with some tops as low as 10L and she will be putting out a new Dollarbie every day, letting them roll over each day so each one will be available till the end of the sale so you won’t miss out on these amazing deals.

Here are a few of the bargains I snapped up while at the store earlier.

This is the Aqua Afterdark Lingerie set in Purple. It comes with this top, another top and a bra. The fabric is a sumptious velvet which makes it very sexy.

This outfit is called BasicNeeds. You can choose to wear it with the skirt or the pants included in the set, made in the same fabric as the skirt.

This is todays Dollarbie called MissingHeart. It can be found on the back wall of the store, opposite the entrance.

There are lots more bargains to be had so go over and take a look!

After yesterdays selection of longer hairs, today I have some shorter hairstyles for you to enjoy. Most of them are unisex so males can wear them too.

This is from Zero Style and is a freebie found just inside the door on a little table. You get several colours in the pack so there is something to suit everyone.

The next set is the Xmas Group Gift from KMADD and can be found by tping to the store to join the group, then checking the notices.

This is called Anessa and is a very sophisticated updo.

This is the second Mohawk in the set which for some reason I think has a more feminine feel to it than the other one, but could be worn by either sex.

This one is called Jude and is more for a guy, but I think it suits girls too.

all poses by Striking poses and Maldita! 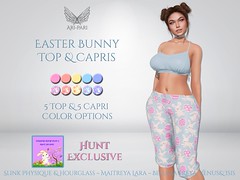 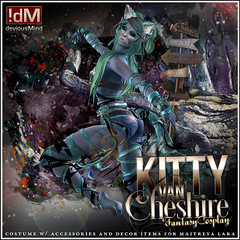 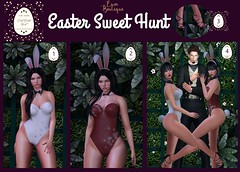