Sometimes we forget to steer our own ship. We forget that we are the captain in these turbulent seas. We let an ocean of troubles wash over us and crash us against rocks and we cry out to an invisible Poseidon that no longer rules the seas: “This is unfair!”

So, I say to the sailor — “Come back to the helm and steer yourself away from oblivion and back to the center of the glimmering sea which once rose about you in undulating waves! Do not wait on the deck of the boat while others steer your ship! They do not stand at the helm like immobile boulders! They are but human also! Do not wait for a turn at the wheel which may never come! Take to the wheel, fight tentacle monsters, dive for treasure, shoot cannons, seek adventure!”

But do it in style! Because a girl has got to look good while talking to dead men on pirate ships! And I have just the list of treasure booty to perk up that swarthy wardrobe in your empty trunk! Check it out!

If you head to LUAS they have great group gifts as well as several Lucky Boards. You have to join the group for access, but the group is FREE. I am wearing Luas May Outlaw in Black as I was lucky enough to have my letter come up when I landed! I also headed inside where they have an amazing assortment of gachas on display, all for reasonable prices. One sweet spin on the Luas Iballa gatcha and I had a Bracers, Pauldrons & Crown set in Red for only 50L (this is a great gatcha as instead of single pieces every spin gets you a full set, just a different color! ❤ for that!).

I topped the look off with a few other great accessories. [White~Widow] has a great new group gift out — a Face tattoo that sets around the eyes called “Mexico.” It comes in a color pack with 5 colors as well as appliers for Slink Visage and TMP Mesh Heads! A steal of a deal for a great FREE group gift (group is FREE to join!). The jewelry is was borrowed from the guy next to me… he didn’t look like he needed it. (Kidding!) But it is a current men’s gift set from Chop Zuey (group gift/350L to join) called Screaming Dead Men’s Choker and Ring and was easily resized to fit a lady.

Be sure to check out the Sim I visited! ROSSAVIK – Hell’s Gate Island is a zombie and steampunk with damage enabled and aliens, zombies, and tentacles abound for you to zap, shoot, stab or otherwise have fun attempting to battle! (It took me more than a few tries to get my pictures taken as I kept getting eaten!) — but it was loads of fun!

Get on your hunting shoes, it’s time for the Men Only Hunt 2. This hunt’s theme is the united color of men, and you will be pleased to find some very colorful hunt gifts along the way. I’ve taken several items and created a look that will set you apart for the drab grays and blacks us guys often find on hunts. I started with the Hawaiian Surf Shirt from Vero Modero and the MOH2 Pants and Belt, just part of the gift from 721. I added the Blue Plaid Slipon Sneakers, the hunt gift from Kennedy’s and accented with the  “Savana” Leather Bracelet from AIDORU.

For some colorful hair, I chose the Sammy Hair and Hat from MONS. The colorful MOH Sunglasses is the gift from ShadZ Eyewear. To match the shades, I chose the Omega Nose Gauge from Haus of Darcy and finished off my face with the Face Tattoo from White~Widow. The poses used can also be found on the hunt at Purple Poses. Men, get some color in your Second Life on the Men Only Hunt 2. 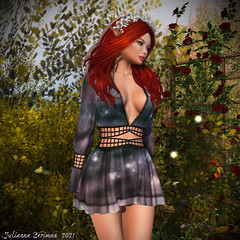 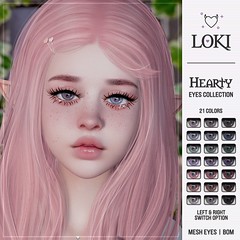 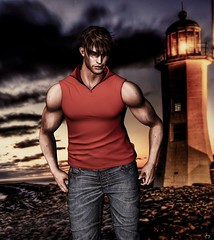