Have you picked up the December 15th dollarbie gift at AQUA yet?  The pink polkadot BabeInSuits dollarbie is under the Christmas tree until the end of the day… or until Ayanna changes it!  I think the swimsuits make cozy sleepwear, perfect for a sleep over!

The Winter Girls black velor sweater is the new midnight mania gift at AQUA!  The unisex jeans are from Sweeter Than Candy in the Snowflake hunt.  A few days ago, my good friend CCTV Giant sent over the red Christmas Crogs and asked what I thought.  I love these Crogs!  The Christmas Crogs will be available tomorrow at the introductory price of only L$100 at Shoe Fly Shoes.

The hot pink Winter Girls sweater is only L$10 at AQUA.  I am wearing the magenta pumps from the Maitreya sub-o welcome gift.  The light Irregular side swept hair is the free group gift at TEKUTEKU.  Earlier today Whisper blogged the beautiful la femme skin from LeLutka at the LE.LOOK sim.  The gift also includes a very nice shape, so if you are in need of a new shape grab the shape gift!  (The shape shown is MY shape though, I haven’t worn a different shape… ever!)  I’m excited to see the upcoming gifts for the male and female LE.LOOK avatars!  We’ll show them as soon as we get them!

Looking for a cozy holiday sweater?  The Frosti sweater is free at NX Nardcotix and includes a male and female version!  The ruby slippers are free when you join the NX Nardcotix sub-o group.  The unisex denim jeans are in the Snowflake hunt gift from Sweeter Than Candy.

TEKUTEKU has a new group gift available in store.  Touch the snowman and you will receive the short EkoEko Sharp3 hair in white and the long side swept Irregular hair.

The Snowflake Blouse is the daily advent gift from G&N Quality Design.

The pale pink Coucou babydoll top and leggings and the red Et voila Christmas dress are free under the Christmas tree at Elemiah Design.  The Christmas Glimmer prim nails are the daily gift under the Miamai Fashion Creations tree.

I’m currently homeless… ughh I hate even saying it!  If you have somewhere to call home, then pick up this free skyBox from = Unit 6 =.  The skybox is 26 prims and even has a secret room behind a bookcase!  The Wicked Skybox is the grand opening gift from = Unit 6 =.

Look at these yummy Christmas goodies that are just waiting for you to give them good homes! Go on, you know you  can’t resist!

+ Step Ahead have set out a free gift of these cute Christmas ankle boots with cute white trimming around the ankle and a colour change hud so you can change the skin shades and toe nails aswell as add toe rings.

+ Momo have released some super cosy knitted dresses and have set the red one out at the special price of 50L!
+ Truth sent out a group gift of a set of 10 gorgeous scarves this morning. If you arent a member of the update group, simply go to the store, slap the subscribo, then check the notices!
+ TekuTeku, also set out a group gift of two snow white hairstyles shown here. The shorter one is a male style but as you can see, it looks equally good on a girl! Just go to the store, join the group and click the parcel under the sign.

+ PAINEfully EnTWINEd have two chained hearts just inside the door at their mainstore. One has this cute dress inside and the other has a t-shirt for the guys.

+ Pixeldolls have generously set out two stunning Christmas gifts for us! This in one of them. There are different ways to wear it as there are lots of layers to choose from so you can wear the jacket without the gloves and the undershirt, or wear the shirt on its own.

I adore Pixeldolls. They have been around forever in SL and are still going strong. I have a whole chunk of my inventory dedicated to their clothing. If you get time, wander the store as they have amazing outfits and seperates at really great prices.

+ This is the second Christmas gift outfit from Pixeldolls. A little bit of a Victorian theme with the bustled jacket and the red colour is just divine.

And this last picture is just to show you how versatile the jacket is.. team it with the gift lingerie from Crazy Clothes that I blogged last week and you have a Christmas Day outfit to knock your mans socks off!

The skin worn in all the pictures are the Peace on Earth gift skins from Heartsick that you can find by hunting the globe in Burning Chrome. Yes I am obsessed with these skins!

+ Rayon Glasses by PrimOptics
+ Shape is my own, made by me.. not for sale, sorry everyone!

Wetherby’s now has daily freebies!  The Monday gift from Wetherby’s was the #64 ‘Mango Cool’ dress.  Tuesday’s was the #65 Two Pieces Ponte Knit dress.  Today’s free dress is the blue #66 Belted Crepe dress.  On Thursday don’t miss the #67 black and pink Print Mesh Sheath dress.  Friday’s dress is the #68 Floral Open back dress.  On Saturday pick up the #69 black and white Sexy Print dress and on Sunday the 15th the blue and white #70 Alejandra dress will be available.  The dresses are all free to Wetherby’s group members.  The matching shoes are only L$20.

Celeste Kat skins are from the Coquette sub-o.  The Celeste skins come in dark, fair, light, and tan skin tones.  Check the sub-o history to get a pack of four BoySox with green, pink, purple, and red stripes and the pink leopard bikini, cover-up, and wedges.  (The BoySox would look great on guys too, so ladies drag your men over to get the 2nd sub-o gift!)  Both of the hair styles are from TEKUTEKU.  The shoulder length hair is the June gift to the TEKUTEKU Update Group, join the group and tp to the store to get this gift.  The short hair is a dollarbie hair from TEKUTEKU.  All the poses are from Long Awkward Pose.

I finally got to camping at the DP yumyum chair.. omg.. it was soo crowded a few days ago…. soo now is your time to go!

splendilicous – exotic skin gift -oL (I actually forgot if it was a groupgift/subscribo or just in store? sowwy:( will check this later! )

mayamaya creations  – eyelashes – oL (groupgift)(kind of hard to see here, but they are cute! there are two types of eyelashes and hair also available!! not shown here!)

a piece of candy – olive dress – may groupgift; (Also a HUGE pink diamond hunt at a Piece of Candy, 26 diamonds to collect with skins, clothing, shoes, accessoires and more! Limited time only soo hurry! )

Today at Lemania Indigo Designs you can pick up this gold Clubbin outfit.  This dollarbie comes with the top, skirt, stockings, and heels.  This Clubbin outfit was put out today and will be gone forever, tomorrow March 18 around 9 am SL time.

After seeing the awesome hat group gift from the LeLutka group, I knew exactly what I wanted to wear with them.  The dark olive green hats come in knit, fabric, and leather.  This Earth Nightwalk Trench coat is from the lucky chairs at Jeckalicious.  Amazing details!  I’ve only won the Earth brown coat.  Sooo… if you need an R for any of the other prizes give me a shout, cause I want them all!

The White Ankle Boot with Cross are the 3500 member group gift from Shoe Fly Shoes.  Just join the group head over to the store and click the sign to get the gift.

The London Revolution Light skin is part of the new gift from the LeLutka group.  The side ponytail Autumn hair is from the lucky chair at Tekuteku.  All the poses used are from Striking Poses. 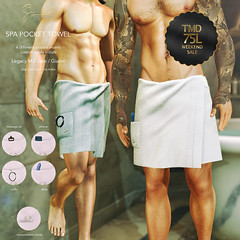 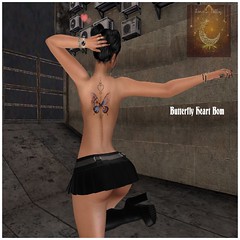 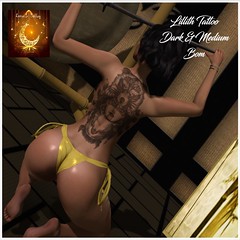 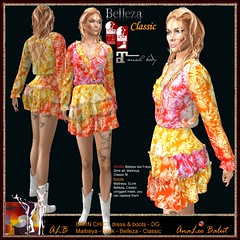 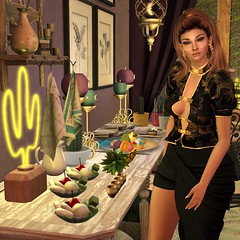