I had a little fun editing this picture. I usually don’t do much to my pictures here because I want you to be able to see what you’re looking at. But in this case I’m garbed entirely in black and white, so I figured we’re not losing anything. You’ll never guess what color the background was, though!

This fabulous tunic dress is one of the free group gifts at Amazing Creations. It hangs really cute and has a fun, artsy pattern. It comes in 5 classic sizes, XS-XL. The group is free to join and there are bunch of other gifts, including some nice ones for the guys.

You can never have enough pairs of really great heels. Love showed the ones that I’m wearing today already here. In my case, I have an overflowing shoes folder…and then I wander the grid barefoot the vast majority of the time. I really love these N-core shoes. They have a bit of a glitter to them, fur at the heel, and can change to 3 metallic shades. They’re one of the group gifts for to the N-core group. It costs 299L To join the group, but once you see the amazing collection of group gifts available at the store then you’ll understand why! The heels I’m wearing come sized for:

Ezura has a new gift to celebrate two years in SL.  The grey 2nd Rezz Day Dragon dress is free for Ezura group members this month.

Also, for mother’s day there are two cloaks available in black and dragon.  (Yes, I know mother’s day has passed, but the cloaks are still available and look great with the dress!)  The Adena updo was sent to the Amacci sub-o group in a fatpack of new colors this morning.

I also picked up the Sexy LowBack dress from Ezura, which isn’t free but comes with two skirt options and looks pretty Fab with the black cloak.  The Mirella heels are a group gift for Felicity members.  These prim toe heels are incredibly easy to change the color.  The Midori Essential Pearl earrings are a free gift at Talisman.

While at Ezura, R came up on the lucky group board and I won the Barely ensemble in hot pink.  The name is quite fitting, don’t you think?

Bina have this very sexy Summer Kirtle in their Midnight Mania board. You get two versions, one clean and one dirty.. and also two lengths of skirt so you can wear it long or short.

This is the longer version. You also get the rope ankle bracelets and two arm cuffs.

If your in the mood to stalk some Lucky Chairs, then head over to CStar and drag some friends with you to claim the April skin gifts.. there are 4 sets available. Each set has two versions of a tone inside, one lighter and one darker..

This is the white skin pack

This is the pale skin pack

This is the tan skin pack

This is the dark skin pack

The lingerie worn in these pictures is from Lingerie by Hollee called Blossom and comes in lots of different colours. The set cost 60L and there are lots more gorgeous styles to choose from.

Careless Whisper in Emerald and Bronze have been added.. for both you get negligee and bra/panties in solid and transparant!

There are also matching male releases also at half price so drag the guys there too.

You get everything shown here, and it is absolutely gorgeous. For the hunt item, you are looking for a womanly figure holding a globe of the earth.

To get it simply join the subo and check the notices. Im wearing it without the white bow belt that comes in the set as I couldnt get it to fit mah bum, but its still a gorgeous summery dress! I love the colour!

G&N Quality Design is one of those stores that I wait in anticipation for the weekly gifts!  This week’s gift includes the green and pink (great color combo, btw) floral Zarah blouse, white pants, and plaid flats.  If you received silver flats, go back and get the white ones because the texture take on the first round.

A new daily gift is available for Second Style group members.  The Dissy skirt, blue Floral Cami, and Linsay flats are in the gift from STORMCROW Clothing at Second Style.  The gifts are available for 24 hours only and since this gift was put out yesterday there’s not much time, so go now!

If your looking for some high end decor to furnish your surroundings pick up this Retro Mini Lamp from the The Gallery of the Minotaur at Grettony Villa.  The eye-catching glass lamp is a piece of art with rotating textures. 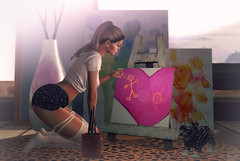 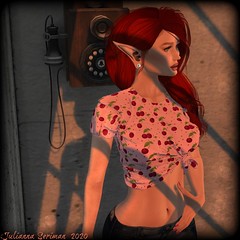