Happy Thursday everyone!  We are that much closer to the weekend 🙂 I have a couple of group gifts to share with you today.

The super cute black baby doll dress I am wearing in the above photo is a new free group gift from SLC!  It spins and flows making it the perfect dress for dancing!  The SLC group is 99L to join,  however there are always gifts and great VIP offers.

One of our Fabulouses, Scotti sent me an IM the other day and said I had to go directly to Felicity (Tnxya Scotti!) and check out all of the free group gift shoes.  Their most recent gift is the 2000 Member Group Gift Stilettos in Wine.  The group is 30L to join, but that’s nothing for a pair of great shoes like this!  It comes with a nailpolish and skin hud as well as you can change the metal from silver to gold and back again if you like lol.

Now if this one pair of shoes wasn’t enough to convince you to run down there and join the group…  check out the photos below.  They are all free group gifts at Felicity as well, and this isn’t all of them!  I know Renee has shown a few pairs of Felicity gifts over the last few months, so make sure you do a FabFree search and check out those posts for gifts as well.  These are some really nice shoes! Good call Scotti – good call!

Poses by Dare (closed, but I do still love their poses :/)

A week doesn’t go by without someone mentioning how much they miss ETD hair.  Well, dry up those tears cause Elikapeka has rebranded and is back making amazing hair!  The Say ponytail is a gift at [elikatira] and comes in a huge fatpack of colors!  While you’re there be sure to join the sub-o group so you don’t miss anything!  The tan Rita skin is a gift at TIK TOK for group members.  This skin has a light pink glossy lip and hot pink eyeliner on the upper lip.  The tiny pumpkin earrings are a gift at EarthStones just in time for Halloween.  While there slap the midnight mania board for more jewelry!

Paris Metro has the Kiss of the Spider Woman 2010 evening gown available for a limited time.  I’m not sure how long this gown will be available so grab it while you can.

To celebrate 3 years in SL Son!a, the beautiful silver and black floral trim ball gown is a gift for everyone!

The white and gold Halloween Princess dress is only L$10 at My Precious through the end of the month.

For a more casual look the orange Tania mini dress and Zip Tears face tattoo are L$1 each at DK Design.

AZUL has two group gifts available in store for members.  The shimmery blue Memorial cocktail dress is the newest gift celebrating 10 thousand members.  Whisper blogged the orange and black tulip dress at the beginning of the month.  This dress is also still available for AZUL update members.

Looking for something to liven up your night?  The black disco cocktail dress is hidden in the L$10 blue diamond at Son!a.  There is also the pink swirl Dali dress in the L$50 diamond at Son!a.  Check in the entrance area and wedding sections for these two diamonds.  The hot pink Sylvie heels are the newest gift for Felicity group members.  There is a small one time enrollment fee of L$10 to join the Felicity group.

The beautiful Summer Good-Bye dress was sent to the SD Wears sub-o members today. The Dafne skins are from PXL Creations.  These skins aren’t free, but are a new release.  The Dafne face has high cheekbones, delicate pursed lips, and innocent eyebrows.

I have a lot to show you and many of these are only available for a limited time, so be quick!  The baby blue dress was sent to the JILL update group members.  This group is free to join and if this is the final gift.  The Headbandtwin hair is only L$100 at Mikan.

Whisper blogged the Platinum Hunt gifts from Son!a and I have to show them again!  The emerald Cassandra gown is stunning and the jewelry set complements this look!  The Platinum Hunt prizes are L$10 each.  The short Melmo hair is a dollarbie at Mikan.

There is a very cute tan babydoll dress available free for one week at The Vinyl Cafe.  The black Melmo hairstyle is in the lucky board at Mikan.

Grimorio creations has the royal purple Viola gown as a new gift in store.

Look for the Butterflies at Paris Metro for the Flamingo gown.  This dress also comes with a shorter wrap skirt and is the gift in the Strut Your Stuff hunt.

There is a new blue shimmery cocktail dress available for AZUL group members.  Isn’t it gorgeous!

Son!a has amazing gowns that will turn anyone’s head!  Son!a was recently added to the fabulous designers in the Fabulously Free in SL groups and her very first notice was packed with amazing goodies!

The fuchsia drama gown is one of the gifts in the lucky chair at Son!a.  I stalked this chair for a good while last night before I realized I had no bottoms on, sorry to all who saw me nude!  The silver Flair diamond wedding ring is a one day gift at Son!a.  All other jewelry shown is not free, but from Burroughs Jewelry.

The Something blue gown is another gorgeous dress in the lucky chair at Son!a.  This evening gown has two different versions for the skirt, sheer and regular.

The zip-up green ensemble comes with two different skirt options which have completely different looks.  This outfit is another lucky chair prize at Son!a.

There is also the white Techno pants outfit in the lucky chair at Son!a.

After you have won your fill at the lucky chair head over to the discount area.  Use the teleport boards to get to the different areas, or you might get lost!  The Adriana Fair rose skin and Aida are in the goodie bag in the discount area at Son!a.  I have blogged this gown before and its one of my absolute favorite!  It’s enough to make anyone drool!

The black Seductive dress is another dollarbie gift that can be found in the discount room at Son!a.  The SoHo PatentMix boots are a past sub-o gift from Maitreya.  The boots are still in the history.  Join the group and touch the joiner again to check the past notices.

There is also a dollarbie group gift available for Son!a members.  The Orchides dress is a lovely summery evening gown.  There is a L$100 fee to join the Sonia update group, but the small fee is well worth it!

The enchanting Candy Peacock tan skin is a dollarbie in the Fantasy Skin section at Son!a.  The skin includes the Ocean eyes.  The Tina hair is a new release at EMO-tions.  The hair is not free, but I loved it so much I had to show it!

The pulled back brunette bun is the Glance gift from MIRONE.

Hmm Red… the red and black dress is from My Precious.  The silver Mary Janes are a dollarbie at Digit Darkes.  The shimmery Fuego Bolero dress is in the Glance gift from Bolero Collection.

I felt a bit like Marilyn Monroe in the black and white Tango Dots dress from Ambergris.  The Ambergris gift bag at Glance has three dresses, three pair of jeans, and a t-shirt! 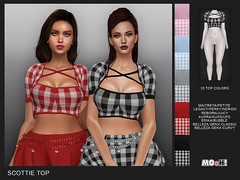 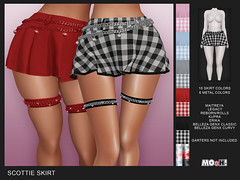 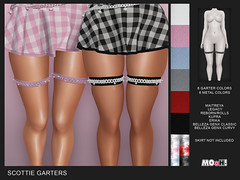