Siss Boom has done it again – They  have gone and put out a fabulous group gift! I am probably starting to sound like a broken record sending you to Siss Boom, but they  just keep putting out amazing things to share with you! <giggles>  and plus… did you really want to miss out on this hella hawt skin they have out as a free group gift right now?  Their group is free to join and they switch up the gifts often – win win!  The Cat-5 skin features black lined eyes with thick eye-popping lashes and glamourous frosty lips.  It does include teeth, but more of a teeth peek, not a whole mouthful of teeth.  It’s really quite an elegant skin.

While you are in Siss Boom joining the group and snagging the free skin, have a peek at their latest new release!  The Shoulder Strap Dress in Invited is the gorgeous mesh dress I am wearing in the photo.  This dress is available in three colours and is 375L.

My ash blonde polished curls are courtesy  of Ingenue.  This one is called Myrna and is available for free at Savoir Hair!

If you  haven’t been to Brandy’s Attic yet, you should run down and take a peek!  It’s a designer’s showcase with a couple of featured designs per designer.  Sira of 1 Hundred has placed at Brandy’s Attic The Retro Uptown Sweater shown in the photo above for 100L as well as the Glamour Dress in a beautiful muted floral print shown below for just 100L as well.

I picked up this adorable skin at The Dressing Room Blue this morning for 70L.  It is Atomic Grace Skin in Buff – Be Mine which is a perfect skin for this time of year with Valentine’s Day being so close.   The heart on the lip is super cute.

I found the Darker Side Vintage Hair at Savoir Hair for just 1L!  It comes with the colour change flower in tons of options which is fabulous for matching up with outfits.  Included in the pack is seven different colours, so don’t worry if blonde isn’t your thing – plenty to choose from!

With autumn finally here, the designers of Second Life have been bringing out rich, warm colours in their fashions, and I have a few fall freebies to share with you!

Today I picked up Sassy’s Halloween Group Gift which includes the top and the belted prim skirt in a deep umber colour.  The hair I am wearing in today’s post is a freebie I found at Savoir Hair, made by Posh and is called Rosey Love.  It includes the hat and comes in a blonde shade and the brown shade I am wearing.

Next, I headed to Pepper to see what was new in store, and they have a new group gift out too!  They are offering the fun music skirt shown below with the belt attached that has on it, a set of drum sticks, an Ipod, keys, a visor etc.  It’s the coolest skirt I have seen in a while!

The sheer sweater with the bra underneath that I am wearing in both Emerald and Spice below are included in Paper.doll’s VIP gift for October.  There is a 200L fee to join this group.

This beautiful amber cocktail dress from Paris Metro can be yours too for free by locating a hidden butterfly at the Four Seasons Plaza location, as they are participating in the Butterflies are Free Hunt that runs until October 25th!

The lovely jewels I am wearing are a gift from Fulo! They are called Gabrielle, and also come in white gold for free. I should also mention that Fulo is currently having a huge sale, so make sure you check out their designs while you are in there picking up your gift!

The hair I am modelling today is a free hairstyle from Exile called Susan, featured at Savoir Hair.  I know…  this is not a new freebie and it has been blogged previously, but it’s fabulous and may be new to some!  It comes in a fatpack of many colours so you can pick your shade!

Renee showed me these eyes a couple days ago – aren’t they gorgeous!? Poetic Colors has these Moon – Autumn eyes out as a freebie in both dark and bright.  I am not sure if it’s just me or if it’s the way the eyes are, but I look at them from one side and they are a deep brown and then from the other, a greyish colour… Very cool eyes!  Is it just me?  I’m curious – try them, and leave a comment to let me know!

Here are some cute skins I found, which are fairly cheap and one is free. The skins are from a brand now called Mamboo Chic, which I used to know as I C E CoCo, but I guess the designer decided to rebrand. I loved their skins and still do, and the great thing is there are always cheapies and freebies around the store! The outfit is very nice, with nice lovely colors! I love how the hairband in the Diva hair matches somehow with the dress. Cute! btw. I am still struggeling with my windlight settings so forgive me if pictures are a bit blurry or too yellow, too blue, too red, hahaha too… anything. Enjoy xxx ^^

Like I said (Mamboo Chic) has very nice skins and there are always cheap (which I define as under 50L) and are always from her newest skin lines. It usually is one sort of make-up or face style, but if you love it, you can buy it for less than the price it costs which is about 500L! So I picked up these two skins shown below.

Both the skins have the cutest face! The only things that caught my eyes, which I would like to change are the dark eyebrows on both skins or have eyebrow-color options since i usually wear blonde hair!

What I am wearing:

Lucky chairs and I don’t get along, but I waited quite a while at MIASNOW to get the Adam Redhead Skin. Since it said it was redheaded, I headed down to Savoir Hair and found the Chichickie Cord Crimson Hair. With a new look I needed some new clothes. I got back on the Go4Goal Hunt and found the South African Louis Maqhubbela Sweater at Cacao. My jeans are the Brown African Jeans from D-Design I showed previously. And I found the Brown Plaid Sand Kickers at Caladesi Island Company, also part of the hunt.

Another skin I found was another hunt gift. The Eyes on the Prize Skin was also in the hunt gift from Cacao. Sek’s Eclectic Kreations is offering the FWC Logo Uniform in their soccer ball.

I’ve been trying to win this skin for a week to show you and my letter finally came up last night. The Johnny Depp Shape and Skin is on both a Midnight Mania Board and a Lucky Chair at Tellaq Avaar Creations. The place has been busy with people waiting to get this skin. The skin is very detailed and will let you go from pirate to candymaker is seconds.

The Myself formal Suit was given to FabFree members over the weekend from Myself. It’s still in the group notices if you want to grab it. by The NVM Quinn Hair Fatpack comes from Savoir Hair for just $1L. and to top it off, the Deluxe Top Hat came as a freebie from Tesla.

At Dressing Aphrodite I found The DA Tomcat Plaid Suit. It is part of the Giai Hunt that lasts until May 3rd. This has a quirky Deppish charm about it and who would question what Johnny wears?

The poses are from Heartless Homes. Candyland was among seven different picture boxes for only $10L.

Savoir Hair is a place  to get to know the hair designers throughout Second Life.
There are special opening gifts as well as free and $1L hairstyles from over 38 hair designers and more are on the way.
We could thank Teagan Blackthorne and Laynie Link to help us to choose the perfect hair.
Let’s see the male ones.

This first one, is available for free in KMADD group. The second one you will find at Savoir Hair. 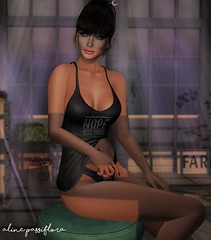 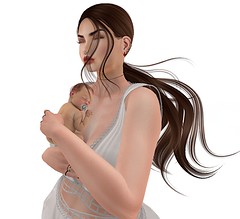