Angelwing is holding a mini hunt for another awesome dress. You will need to hunt around the store for little sculpted angel wings to find the parts to make up the outfit. The hunt is on until sunday so be sure to stop by!

This is the dress that is the prize in the hunt, and I couldnt resist buying two more to show you.

With so many colours it was difficult to chose so I went with my favourite colour which is red and also the plain black version too. The outfits to buy are 200L and that I think is a bargain.. And there is a hidden bonus..

If you wear just the shirt, pants, socks and underpants layer you get this sexy lingerie set!

While you are still at Angelwing be sure to check out this really gorgeous swimsuits that are available in six colours for 50L each! I love the sequin detail. The bracelets worn in both pictures are the current Midnight Mania prize from Rhedd Night Designs and will be there until Wednesdays. The board needs just 50 slaps to release the prize and you get three sets inside!

Hucci sent out this new group gift in their subscribo. Join up then click the folder underneath the subscriber to activate the history. The dress should be message number three.

Phoenix Rising also have a group gift out in their subscribo.. and there is a gift for the girls and the guys! Join up and check the notices. It should be notice number one. The Datura bodice top is the subscribo gift from Nightshade Designs.

Pink Fuel are taking part in Project Themeory this week with a set of skins priced at 75L each tone and there are five tones to choose from. I naturally went for the palest skin tone available, called Milk! Im not sure what the theme is this week yet… but judging by the heart carved in the cheek, its going to be interesting *giggles*

LeLutka are taking part in this weeks 50L Friday with a skin in a set of four tones. You also get the breast enhancers for each tone, a set of eyes and some eyelashes in the package!

Here are all the tones you get in the pack!

The hair worn in all the pictures is the new group gift by EMO-tions called Lydia. Join the group and slap the board to claim it.

I got a notecard about this weekends Project Themeory event from one of my favourite stores called Boom!. Project Themeory is where a group of stores take part each weekend to set out a brand new item for 48 ours at a special price of 75L, all based around a common theme. This weeks theme is Geek Chic so its right up my alley *pushes her glasses back up on her nose*.

This is the 75L Project Themeory outfit from Boom! set for 75L for the next 2 days. Right next to it are these “AFK (In AION)” shirts, one in pink and one in blue, which I found pretty funny as that used to be my Busy response in SL back several months ago.

As an aside to the geekery… if you walk around the back of the front display, there are some little bags each marked differently from 0L to 25L. I picked up

League are also involved in the Project Themeory weekend with this Teachers Pet outfit which you can wear three ways.. You can wear it complete as above.. as the tank by itself, or you can wear it without the tank if you are feeling cheeky..

You can buy the matching gartered socks aswell for 75L. The panties are part of the Megan set of lingerie from Hollee’s Lingerie for 90L.

And don’t forget to pick up the ZombiePopcorn hunt item here to get this unisex Test Match Vest.. looks cute on girls.. Carson will hopefully show us how hawt it will look on a guy later.. Geeky guys *drools* 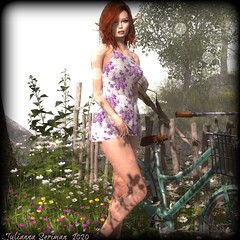 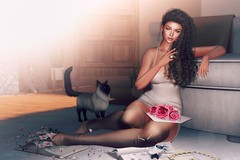