SAKIDE has two very nice gifts for the With Love Hunt, one being for women and one for men.  The First Frost outfit is the gift for women and includes the sweater, scarf, mesh skirt and mittens.  The White Crocodile Boots I am wearing are not free, but are available for purchase at SAKIDE, and match perfectly with this outfit!  Calgon is wearing the men’s WLH gift  from SAKIDE that includes the matching mesh sweater and mittens. His Lash-Ware Black Rolled Denim Mesh Jeans are also a steal at just 25L.

The couples pose we are using is a With Love Hunt prize too, and it can be found at oOo Studio.  It’s called “Sweetest” and includes the candy cane heart.

As mentioned in my previous post, all of the With Love Hunt gifts are 10L and the icon to search for is a black gift box with red ribbons. Complete list with slurls & hints – http://www.chic-management.com/

The Never Back Down hunt is wrapping up soon and ends on October 12th. Don’t miss your chance to get some great military style clothes for free! Above I am wearing the outfit from (#25) Shadow Moon which includes the mesh hoodie, rugged boots, black pants, and a tank top (not shown). Ladies gifts are hidden in a bullet, men’s gifts are hidden in a grenade, unisex gifts can be in either one. I suggest using the hunt blog because it lists which stores have hidden which type of gift.

Never Back Down Hunt Blog:
http://neverbackdownhuntsl.blogspot.com/p/store-hint-list.html

I love these Camo Pants from (#1) Pretty Kitties and their gift also includes boots and a Hellcat T-Shirt (not shown). The Gorillas shirt I am wearing is from (#4) Alterego and pairs great with the pants.

Another great casual military outfit on the hunt comes from (#5) Lash-Ware and includes the camo pants and button up shirt.

Well were close to the end of wrapping up coverage for the Finding Fab Free Hunt. I’m back to show you the rest of the great gifts men can find on the hunt, plus I sneaked in some couple poses too. Don’t forget you have from now until September 30th to continue hunting and get these fabulous freebies. Renee will be back later today with the final hunt post (120-131) for the ladies!

The Cart Wash event is still going strong and you still have time to get some great bargains. Lash-Ware has some nice menswear for sale on their cart with nothing over 10L! You can mix and match the different pieces to create your own unique look. Above I am wearing the shirt from the Bold Outfit and paired it with the Brown Tribal Jeans which comes in a pack with 3 other colors.

I’m out looking for a motorcycle to match my outfit. How’s this one? I’m wearing the Leather Snake outfit and it includes the black tank top, blue leather jacket, and low rise blue jeans. The back of the jacket and pant leg of the jeans feature a dragon design. The blue jeans also come with optional prim cuffs.

It’s a hunt time again for just the guys. The Mr. Hunter v. ii Hunt starts May 1st and lots of goodies can be found including the  Mr. Hunter v.ii Blazier Polo Combo and Pants from Lash-Ware. I’ll be showing much more from this hunt in the coming days, so stay tuned.

Seeing how it’s a lazy Sunday afternoon (I am in a serious lethargic state today), I thought I’d relax in my hammock and just daydream. I was lucky enough to win the Red Pa-que Shirt from the Midnight Mania Board at Poison. I paired it with the Brown Tribal Jeans by Lash-Ware I found at Mens Select. The jeans come in a 4 pack with other colors being black, blue and gray. That’s four sets of Jeans for just $15L. I think it’s time for a nap. Shhhhh… don’t wake me.

April 6th brings the opening of a new discount salesroom for men called The Den. Here you can find many discounted items from stores such as Lash-Ware, Fe, Rispetto Designs, Loordes of London. Peer, and many others. A grand opening party will be held April 6th from 6-8PM ST with gifts and door prizes.  The Mr. Hunter Group is providing for their group members the Mr. Hunter T-Shirt and Shorts. One of the items available for sale at The Den is the Strapped Wrist Bands by Lash-Ware for just $25L.

Lash-Ware also has the Ravaged Outfit discounted at The Den for only $15L. The hoodies, ripped tank and jeans can be worn as separates to give this outfit varied looks. Be sure to stop by the party for some great gifts. maybe I’ll see you there.

It’s almost time hunt those Easter eggs and I thought I’d hide a few special ones in the bedroom. And if I’m hiding eggs I should dress the part. Top Katz has just the outfit as part of the Evil Bunny 2 Hunt. The Blue Bunny what you get when you cross Easter with a Chippendale dancer. The costume consists of a collar and cuffs, blue silk boxers and ears. It also comes with a fluffy tail.

Keeping with my pastel theme, Lash-Ware has a fatpack of Jock Straps and Matching Tube Socks at Mens Select for just $25L. This comes in 8 different colors, black, blue, green, navy, pink, purple, yellow and red. Each color also includes a prim bulge. Hrmmm…. now where should I hide this egg?

I think we have jumped past Spring and right into Summer with the warm weather I’ve been experiencing. I came home from work and slid into a pair of shorts. And you find your own shorts (and shirt too) on the Depraved Spring Madness 2.0 Hunt at Lash-Ware. The Military Shirt and Denim Shorts come in both his and hers styles for the lazy days of Spring ahead. 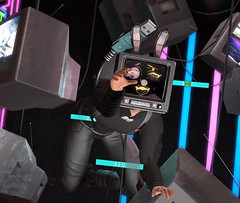 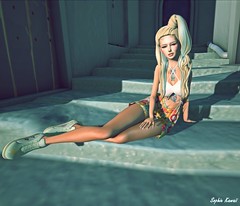