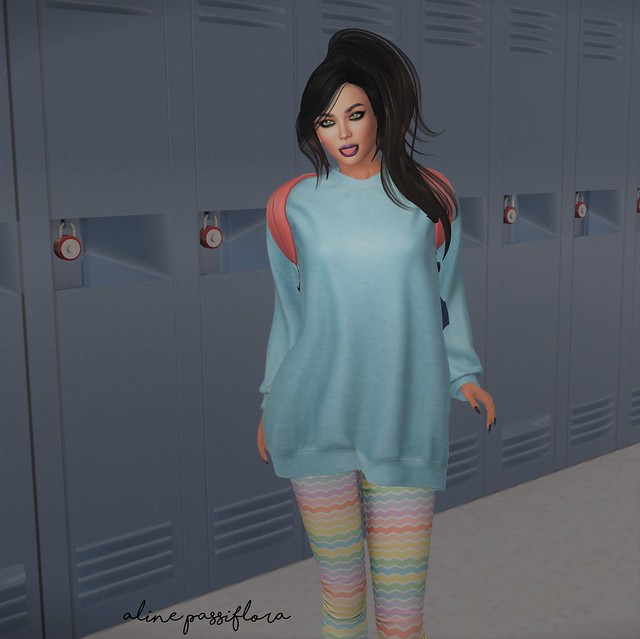 High School was a while ago for me, I’ll admit, but I still love the idea of a slouchy outfit, a high ponytail and a backpack slung low.  It’s that feeling of promise and excitement that I’d like to capture today – that feeling of your life ahead of you, while still thinking you’ve already got it all figured out.  Plus, it’s just generally a cute look don’t you think?  Pack a lunch and read on so I can tell you all about it!

I jumped over to the Land of Rainbows, and had a grand old time hunting for eggs all around the beautiful sim.  This is a true egg hunt, wherein you just wander and try to find as many eggs as you can!  Much fun to be had, and the eggs are all free!  I picked up this fun slouchy sweatshirt with backpack attached by M&M Style in my searching, which comes with a texture change HUD that changes the colour of the sweatshirt (and adds some sayings to the front) as well as changing the colour of the backpack.

The leggings are another awesome find on the Land of Rainbows hunt.  I found these pretty leggings (which also have a texture change HUD) hiding within an egg.  I think these will be super cute for lounging around, or for working out in style! And happily they’re free!  There are loads of lovely things to be had – you can also see what Kathryn and Stan found! The Land of Rainbows hunt runs until April 6th! Hop to it! 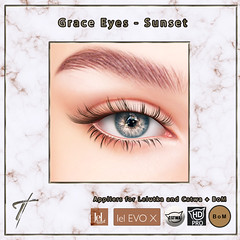