Oh yeah – I love this blue!  JazmynD has placed a free gift at the Violette’s Closet Closing Out Sale – It’s a blue, paisley printed dress, and quite adorable if you ask me!

The tall black satin boots are Koko’s new group gift that is free to join!  How perfect that these two gifts come out at the same time because they are smokin together 🙂

I am also wearing a group gift necklace from Lazuri that goes perfect with the ensemble!

This great little black city dress is Fierce by JAZMYN D . Its a great store gift. I added my big sunglasses from the Got Jackie? short dress I blogged. Paired with my Virtual Impressions Chloe boots Im ready to hit the city streets.

I have a few dresses to show you that will get your partner’s blood pumping.  The racy black Prudence gown is a subscriber welcome gift at Nzuri.  This dress has a open front and is quite revealing.  The Cowry Shell necklace and choker are a free gift at Accessories by Eolande.

For a summery every day look, the red Poppies dress was recently sent to the JAZMYN D sub-o group.  The white Ginger gown is a gift from SLACY’S for the Hollywood Walk of Fame hunt and is perfect for date night with someone special.  The ebony Vaneza curls is a gift from BishWear, free until Hair Fair 2011 begins.

Once upon a time, there was a young woman in love. Granted, this happens frequently in life, and many, many women and men fall in love. But this story isn’t about them. This is about one particular young woman. Let’s call her… Ophelia. That’s a good name, don’t you think?

This beautiful, charming, vivacious, awesome, etc. woman was told by her beloved that he would meet her at the enchanted oasis where they first met. She put on a new dress, and put her soft hair up, and donned some new makeup so that she could present to him a pleasing visual of herself. Normally, she wouldn’t bother, and would say screw it, throw on some jeans, a tee-shirt, and some chapstick and call it a day.

Now, this young woman’s beloved did not specify a time that he would meet her. He just said that he’d be there, but not to wait for him past nightfall. She offered to him her GPS and an extra map in case he needed help finding their special place again, to which he replied “Nah babe, I’ve got this.” She sighed and thought to herself “Pffft… men, they never stop for directions” and thus leaned against a tree as she waited, daydreaming about the happy life she could have with him.

Minutes passed by slowly, turning into hours. She watched as the sun moved across the sky, staring up at the clouds, and avoiding any birds that tried to crap on her. (Birds like to do that, you know.) Before she knew it, she realized that the sun was setting, and her beloved had warned her not to wait for him past nightfall. Shaking with heart wrenching sobs, she took down her hair, letting it flow free around her, and let her tears mess up her makeup. As she cried, a friendly little bird (the non-crapping-on-people type) flew down and landed upon her finger. “My sweet lady, why do you weep?” it chirped. Her face red and streaked black, she looked tearfully at the tiny bird and proclaimed “Little friend, I weep because my beloved was supposed to meet me at our special oasis where we first met. He told me to wait for him but not past nightfall. He assured me he didn’t need my GPS or my map to help him find the place. Tiny bird, I have sat here and waited all day, and night is now upon me.”

The little creature let out a sad little whistle, and was about to comfort the lovely young woman, when she suddenly burst out in an exasperated sob “PLUS I JUST REALIZED I’M AT THE WRONG DAMN OASIS AND I DIDN’T BRING MY CELL PHONE!”

The little bird sat thoughtfully for a moment, looking at her. Quietly he spoke at last “My lady, that is indeed a most unfortunate circumstance. I am bereaved to point out another misfortune. You are clearly insane, as we birds don’t speak in reality.” The tiny bird then spread its little wings, dumped a crap on her hand, and daintily took off in flight.

The morals of the story: Don’t talk to animals, don’t forget your cell phones, never assume it’s just the men who don’t know anything, and always carry extra makeup in case another prince charming comes along. 😀

The land that I took the picture on is a friend’s private residence. 🙂

Trying to catch Santa’s eye this holiday season?  The little Christmas outfit is a gift under the tree at eXxEsS until the end of the month.  This gift includes the red crop top, mini skirt, ear muffs, and boots!  Find the gift under the tree at MIAO for the black pearl Vixie necklace.  Hurry cause this is an advent gift and the gift changes daily!

JAZMYN D sub-o members were sent the timeless red Eleganza Formal gown a few days ago.  This gown is a beauty any time of the year!

Have you been to the Feed-a-Smile Fashion Show yet?  Profits from the items being sold at the event go to Feed-a Smile.  Live and Learn in Kenya NGO has to feed 466 children and the Feed-a-Smile event we will try to feed these children during the duration of the school holidays ( 466 children x 27 days = 12,582 meals ).  One meal will cost a L$100.  http://feed-a-smile.blogspot.com

Throughout the area there are amazing creations by some of the top designers in SL.  There are also a few gifts scattered around.  I picked up the Feed-a-Smile unisex shirt and also the Angie pantset from the G&N Quality Designs gift pile.

For all the ladies looking or just hoping to get hitched, the complete bridal gown is also available from G&N Quality Designs.

The Serenity white dress is a gift from JAZMYN D at the Feed-a-Smile event.

The short Emma hair and Sawyer dreads were sent to the Discord Designs sub-o members this morning.  The headband on the Sawyer hair is color changeable so you can match your wardrobe.  The beautiful SoulHeart eyes and Cynthia Starfish and Coffee skin are in the Mynerva Fashion is Love hunt gift.  I love freckles so this was a definite keeper!

How about one last Independence Day post before the festivities begin?  Annabella’s Song sub-o members were sent the washed out USA bikini today.  I really like the washed out colors this holiday!

The sequin 4th of July dress is a gift at BishWear.  The Hula Hoops and poses are L$150 for a pack of 4 at !BANG.  The sculpted Independence Day hat was sent to the December sub-o and in world group this morning.

The blue short sleeve t-shirt was sent to the Prim & Pixel Paradise members today.  There is a version for men and women in the gift.  I bought the Americana shorts for only L$37 at Insatiable Fashions.  The Patriotic Faith skin is a group gift for Atomic members.  The skin comes in caramel, honey, and porcelain.

Pink Outfitters has a white graphic tee in to celebrate the 4th of July.  Jazmyn D has a handkerchief flag top as a gift today.

I’ve been trying to win the midnight mania sofas from terra for a few days now.  There is a regular version, Independence day US Flag sofa, and even one for the Canadians.  The boards need several more slaps before they lock, so get on the list before midnight!  I have no idea where I will put these once I it locks, since I’m very much homeless, but they are nice, right?

It seems a lot of sub-o gifts have fallen into my inventory today, so I decided to show a few of them.  a piece of candy sub-o members were given the green Dani babydoll dress and a fatpack of Crystal tops in red, butter, black mint, and baby blue.

Prim & Pixel Paradise sub-o members were surprised with the Peach Floral top in the midrift and mid lengths.  The Eleanor highwaist shorts are not free, but fabulous from R.icielli.  These shorts in the sea color are still a free group gift at R.icielli.

The white Miranda and black Lara tops are a dollarbie each to celebrate the grand opening of VLIET Shapes.  I put on the moody blue Flight jeans from GryphonWings, because I knew Carson was missing them sooooo much.  These jeans are L$10 in the sample gift bag at GryphonWings.  The two swimsuits (previously blogged) are still available at VLIET Shapes so grab those as well if you haven’t already!

The primrose Summer Tie Up blouse is another gift that was sent to the Prim & Pixel Paradise sub-o members this afternoon.  The Clarissa highwaist jeans are another not free, but hadtohavethemrightnow find from R.icielli.

Graffitiwear sub-o members were sent the gold sequin dress today!  The Victoria jewelry set is from Burroughs Jewelry.  Each piece is an introductory price of L$99.  The earrings (which I’m wearing but are hidden behind the hair) are free for 72 hours only!

The beautiful sunkissed Brooke skin is the newest sub-o gift for [dekade.] members.  The skin comes with and without hair base.  Jazmyn D sub-o members were sent black and white shorts and a fatpack of tanks as the July gift.  The tanks come in black, blue, green, pink,purple, red, and white.  The Watermelon Seed Peeptoe heels are the prize in the Prize Roulette at She’s So Unusual Shoes.  Here’s how this works.  Get you and 5 friends to sit on the stools. Last one left sitting WINS!

The short yellow top is the newest prize puzzle dollarbie for the women at INDI Designs.  If you missed the black leggings from last week they will be available for L$5 once the puzzle is complete.

The fun flirty May dress from My Precious looks like an artist canvas.  This dress is L$10 for My Precious group members and it is free to join the group.  While I was there I also picked up the L$10 Maria dress because I don’t think I’ve shown this one before.  Come to find out it IS already in my closet filed away, so I probably have blogged it before… but I’m showing it anyway!  The silver Leaves bracelets are the May sub-o gift to the Dark Mouse members.  If you’re not in the Dark Mouse subscribe-o-matic, then join so you can be eligible for the next gift!

The cream colored Lulu’ de jour dress was sent to the Baiastice update members yesterday.  I think this dress would look nice for a summer wedding!  The Alex hair is from Dark Mouse at Savoir Hair.  I am wearing the classy updo in the chocolate shade, but it comes in a fat-pack of delicious colors! 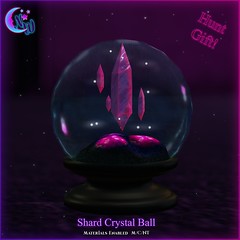 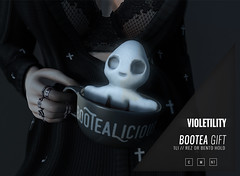 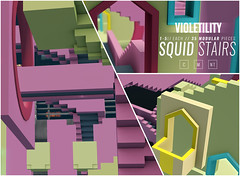