AQUA has moved to a new location at the ICON Lifestyles II sim. And with that move, they are taking part in the ICON Hunt. The gift isn’t hard to find and it is worth stopping in for. The Suitably Yours Avocado/Blue Outfit is the male part of AQUA’s ICON Hunt gift. There is also a ladies gift as well.

Grab this Tropicana Hunt gift from Jairis. The Fresh Air Chemise Shirt has an open front, perfect for your favorite tee or tank. I matched it with the Vance Black Pants, the latest dollarbie puzzle piece at INDI Designs. Also head over to INDI Design’s ICON Lifestyles location and find the Oliveri Sneakers that are part of the ICON Hunt.

Here is part 2 of the ICON Lifestyle Hunt. You can read part one here if you want to see the majority of prizes available. Some stores didnt have their items out yesterday and SL was playing around with me not letting me rez others.. here are a few more of the prizes, aswell as some freebies you can find in participating stores.

Here are some of the freebies you can find just generally in the stores participating..

+ Long Hot Summer skin by Heartsick at their SSI Store for 10L as part of the Long Hot Summer Sim wide hunt (last day is today so get it while you can)
+ Hair by W&Y ( not free )
+ Poses by Fri.Day, Long Awkward Pose, Kuso, Persona, Glitteratti, Diesel Works, Striking Poses

Here a couple of things for guys to find on the ICON Hunt taking place in the ICON Shopping District. The ICON T-shirt from AlphaMale is a must have.

You can find the Oliveri Sneakers just next door at INDI Design. These have become my favorite sneakers simply for the great detail these have.

Hopefully I will bring you more from the ICON Hunt when my lag issues subside.

ICON Lifestyle Sims are having another hunt starting from August 19th – 31st. You are looking for tiny little black boxes like the one below..

It is spread over two sims so make sure you visit both of them to get your share of the goodies. SL was being precious today by swallowing things I had collected and not rezzing other things I had got, so here are some of the things you can find. I will do an update tomorrow! Some stores also have general free gifts besides the hunt prize so don’t forget to pick those up too.

Audrey Skin by TULI. The swimsuit is the prize from FK Virtues 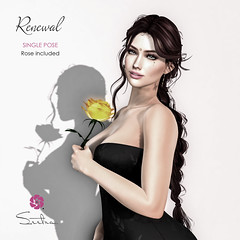 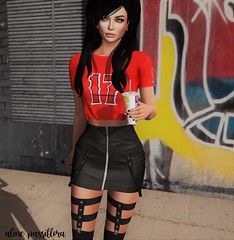 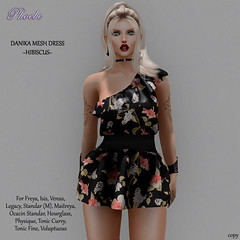 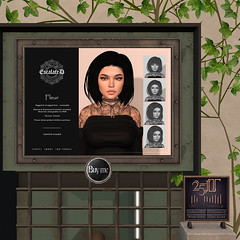