I hope you are getting lots of goodies as you go about trick or treating this year. If your sack isn’t big enough for everything, get the gift at !Bang. The Help, I’m In Your Sack pose prop is a fun distraction from raking the leaves. Look for this at !Bang‘s Second Style Island location.

There are still hunts happening at Tribal Luv Thang. The Hallows Eve Hunt is ending but you still have time to get the Broom Hilda Tattoo.

And a new hunt starting tomorrow at Tribal Luv Thang is the Pilgrims Hunt 2. The Kae Tattoo is the prize.

Here’s to all the goodies you’re finding…cheers!

﻿I thought I’d trick or treat on the Hallows Eve Hunt and found lots of goodies in my bag. I found the Skeleton Tee, Black Jeans & Sneakers at Serenity In The Sun Designs. The Tarantula Belt is the hunt gift from MAGICALLY ALURING.

Around my neck is the Ghoul Necklace that can be found at [BedlaM].

Bella’s is offering as their hunt gift, the V-Neck Shirt & Grunge Jeans. And you can get the Black Croc Boots at House of SOHO. There is many more treats on the hunt that I hope to show you later.

I stopped by Graffitiwear to try my hand at the Unlucky Dip game. I wasn’t sure if I wanted to bob for the prize in that or not.

But I was lucky enough to come out a winner and received the Spider Slippers as a prize. While I was at Graffitiwear, I also found The Bat Shirts. This comes in four colors and they are only $50L each, or get the whole set for $150L.

Join the Sub-o at Exposeur and get the Men’s Dufflebag Poses I used in this post. Also on the wall is the Surprise Kiss Pose. I snuck one in on my better half while she wasn’t looking. ❤ 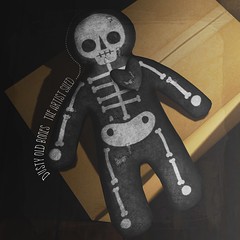 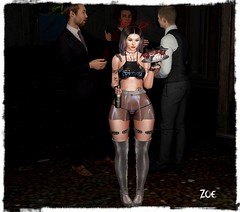 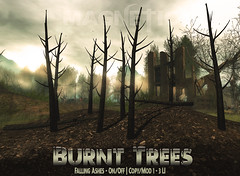