Good morning Fabulouses!  Before I head off for my day in RL today I wanted to share some news with you about Morphine‘s new group gift!!  When you make a purchase in the store at Morphine, you are auto-invited to their free inworld group which allows you to pick up the group gift in the VIP section as well as take advantage of special offers.  The group gift for June/July is the very cute Slink Add-on Mary Jane Shoes for the high feet that you see in today’s post.  The black is included in the pack too, making these shoes I can wear all summer, and all winter too!  I’ll be sure to show the black ones off in another post soon 😉

The landing point at Pure Poison is where you’ll find the Featherish Necklace by Fox.Poison priced at just 45L in both white and black.

Good morning Fabulouses 🙂  Yes..  I know it’s Monday, but it can still be good!  I know just the way to deal with  that darn “Monday Mayhem”…  Call up your friends and go a little crazy!

Today, I have four little friends with me.  I only started out with the fairies… but the rest followed!

*  Pig – Shadenfreude Meat Piggie Wiggie – These adorable pigs are available in several variations at 50L per play – The Arcade Gacha.

*  Fairies – !Ohmai: Dandelion Fairy & Bumble Bee Fairy  – I think I am going to need to collect all of these little fairies by !Ohmai:.  There are some wearable, and some in jars – even a stand to play for to display them –  75L per play @ The Arcade Gacha.

*  Puppy – Birdy Alchemy Doge – French Bulldog – Cream.  My friend Suz (who I actually started SL with over four years ago!!), sent me this adorable little French Bulldog.  TY Red Suz!  If you’d like your own little pup, they are just 100L per play @ The Chapter Four.

I also wanted to tell you about my outfit today, because there are a couple of freebies in here too!  The Peach Emoji Dress is available as a free group gift at Lucky Peach.  This dress can be found in the notices of the free inworld group.  I have worn my Pure Poison Frills Sandals in Nude, which were another Arcade Gacha find at 50L per play, and these fab and fun Daisy Glasses are a free group gift at Pure Poison in three colours to celebrate the opening of Fox.Poison! 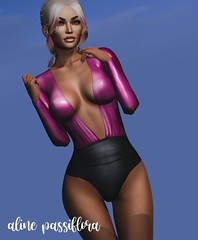 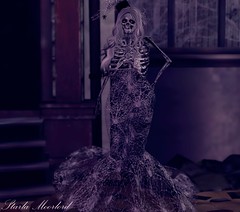 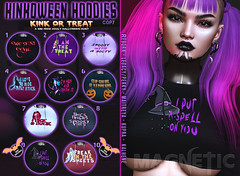