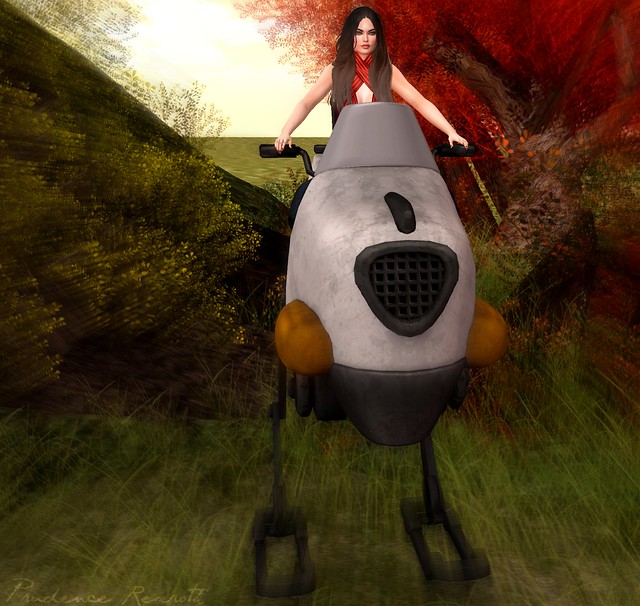 I won’t lie, I’ve been seriously geeking out about the current round of The Fantasy Gacha Carnival. For me it doesn’t get any better than the nerdy goodness of a Game of Thrones versus Star Wars gacha festival. Yes, you read that right. Now as much as I love Game of Thrones, in my world, Star Wars ultimately wins me over. Maybe it’s because I have a lot of nostalgia attached to Star Wars. Either way, there are a lot of lovely things to be had on both sides.

It was tough to decide what to show first, so I took a step back from the Fantasy Gacha Carnival and let my hair decide. Little Bones has put out their first ever Midnight Mania Board. This pretty center part long hairstyle is the current MM board prize, and it includes an exclusive color hud with 8 “Natural” and 8 “Unnatural” hair colors. You’ll need to join the Little Bones group to participate in the Midnight Mania, which has a one time join fee of 100 lindens. The join fee is completely worth it, Little Bones is notorious for fairly frequent group gifts, and now the addition of their Midnight Mania. If you’ve held out on joining, now’s the time to get in and take advantage of this great group and awesome brand.

Now, back to the Star Wars inspired finds I gathered at The Fantasy Gacha Carnival, well most of them. First, this awesome All Terrain Recon Transport vehicle by Sushi. Yes, this cool wearable vehicle came from a gacha! I managed to score the BB8 version of this vehicle, which is one of the many commons available. To ride the vehicle you simply right click on it in your inventory and choose “add” to avoid detaching any attachments you may be wearing. You’ll then want to set your avatar to fly and you’ll see the ATRT’s legs start moving. I had to fly down a little to get back on the ground while still in fly mode. This too-cool gacha is just 75 lindens per play at The Fantasy Gacha Carnival.

Next the top and pants Pru is wearing are both from the Moon Elixir gacha. This gacha includes a full set of female “Scavenger” clothing in two variations, with several color options, as well as separate machines depending on what mesh body you do or do not wear. Clearly inspired by the uniquely Star Wars fashion universe, I was not at all disappointed in the fit or look of these items. I also think they are versatile enough to be worn outside the realm of fantasy role play. The Moon Elixir gacha is also 75 lindens per play at The Fantasy Gacha Carnival.

Needless to say, I had a lot of fun putting this look together with all these great Fantasy Gacha Carnival finds! I hope you enjoy it too.

Here are the details!

Hello Fabulouses! I’m totally sneaking online in the middle of my work day to get a little “blog fix”!  I wanted to show you a couple of stunning items at The Fantasy Gacha.  The Junbug machine is 50L per play and there are a few different prizes, all of which are just breathtaking.  My favourites of the bunch I played for were the Azure Nightflower Gown (rare) and the Ink Satin Bow (common) that I am wearing in my post today, although I quite like the vintage style Dayflower Dress too.  I may have to show off that one soon too! lol

These great Flutter By Butterfly poses are available in an instore gacha machine at Infiniti  for 50L per play.  I love the colours of the butterflies!!

Ok.. that’s it from me for now… Tell no one I was here this afternoon lol – and check out The Fantasy Gacha!!

Oh!  How I love Friday!!  Friday means Fifty Linden Friday stops for me, first thing in the morning.  Mostly I run from shop to shop down the list while I am multi-tasking putting on my face in the morning getting ready for work or skipping  breakfast or something lol.  FLF is worth one side of my face being un-mascaraed or those 10 AM hungry tummy growls.

This morning I picked up the FLF items at Glam Affair and Junbug and boy am I glad I did!  Junbug has two of their Ophelia Dresses out in Floral and Polka, priced at 50L each.  Above I am wearing Floral, and below the Polka.

For this week’s Fifty Linden Friday offer, Glam Affair has out their Cocktail Girls Duo including the Kallista and Oakley Skins in the Asia skintone.  You get both skins for one price of 50L and there are several eyebrow options included.  What a deal!  Don’t forget the FLF items are only available for one day only!!

The Janice Jewelry Set is a free group gift at Virtual Impressions and looks lovely both with formal and less formal attire.  This set comes with the necklace and matching earrings (which are a little hard to see in my pictures – sorry!).  This group is free to join, and while you are there make sure you grab the freebie box by the stairs too!

Hello Fabulous readers 🙂  This week I watched one of my favourite movies, “Under The Tuscan Sun” which I have seen a bazillion times, and was inspired to revisit Solaria inworld, which is  a beautiful, authentic Italian themed sim.   There was plenty of Italian chatter going on in local (which I didn’t understand of course, but it sounded lovely all the same), and even a handsome Italian man playing his guitar and singing.   It was “almost” like I was right there in Italy… for a few minutes anyways, until I was ever so rudely yanked back into the reality of RL where the laundry machine was buzzing at me to start folding. MEH.. But…  before I logged off, I managed to snap a few photos of the outfit I am wearing today because I thought you might be interested in hearing about the great gacha deals and freebies I put together.

The classy white 9-5 Dress is made by Sassy! and is available at the Greek Isle Gacha for 50L per play.  There are several colours to play for, but I was inspired to wear the white ;).  Those of you who saw the movie or read the book may remember the reference.

My Damselfly Sunhild hair can be found at The Fantasy Gacha, priced at 75L per play.  I think you could roleplay this versatile style up or wear it with a classy dress too.  There is also a pretty cool mens hair to play for too that is very much like Kahl Drogo’s (rawr) from GOT!

Are you eyeing up those hot shoes, wondering how much they are going to break your bank?  Well…  If you happened to listen to me when I was telling everyone to join the Essenz inworld group when it was free to join and they would soon have VIP gifts [HERE], you can now find the Slink High Feet Add-on Denver Shoes in White in the past notices for a limited time.  If you aren’t already a member, you’ll need to pay the 350L join fee.

More “fab” news to share with you is that in the notices of the MOCK Cosmetics inworld group (250L to join), there are a ton of Innocente Lipcolors as gifts!  I have shown five below, but there are a ton of colours!!  This is a very generous group, very often offering plenty of group gifts – well worth the join fee! 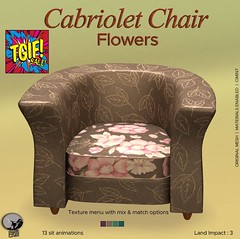 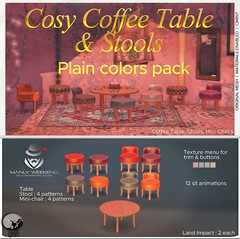