SD Wears are having a Seashell hunt at their mainstore.. there are loads of seashells scattered all over the walls and floors and thirteen of them contain prizes of outfits, seperates and storecards. If you are feeling really brave you can have a go at the second part of the hunt and attempt to count all of the seashells in the store, then submit your guess to the postbox instore for a chance of winning a 5000L shopping spree!

Just searching for the prizes to show you made me go cross eyed, but good luck to those who give it a try!

I couldnt find shells 8 or 11. The other missing numbers are giftcards.

The Ripley short necklace worn in the pictures is by Burroughs and is available for 99L. The earrings in the set that you can see below, are available for free for a limited time.

Silent Sparrow are having a retirement sale with all items in their special sale room reduced to 50L or under. There is clothing here for males and females so guys be sure to take a look. Its great for Victorian/Gothic suits.

I have always loved hyasynth Tiramisu’s clothing and I remember buying nearly everything in the store back when I first started SL several years ago. I bought a few things at the sale to give you an idea of what you can find!

The skin worn in all pictures is the Illusion Feathers skin by Heartsick and can be found at the Heartsick Second Style Island store for 50L as part of the Week of White event going on there. 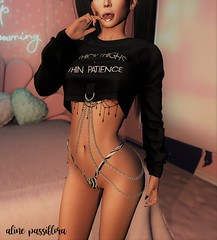 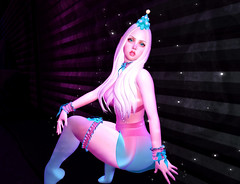 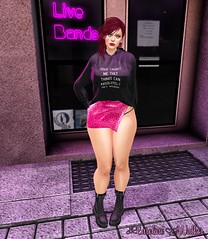