Ok all you ladies on the fence about trying a mesh head.. this is your FREE chance!  For a limited time only, when you join the Adam & Eve inworld group (which is free to join!), you can pick up the new *!* EVE Mesh Head in a basic free version.

The free version does come with a HUD that allows you to make some alterations such as skin colour, eye shadow and lipstick.  If you’d like the full version, it is available for purchase…  Just don’t blame me if you have so much fun with it that you start a mesh head collection! <hangs all her mesh heads in shame>. 😀
*****************

As you can see.. it got to Sunday and mah brain stopped working for a post title. Oh well. Onward to the goodies!

CStar have a new Limited Edition skin of the month out in their Lucky Chairs. Twelve sets of skins to be won, 6 skin tones with 2 different make-up/effects on the skins.

Here is a close up of the make up on the skin.

I was stalking it for a while and I finally managed to win the Pale set to show you. You get two tones in each skin tone pack. A light and a darker version. I really need to make an alt with a more widely loved letter as the initial! W is not a Lucky Chairs favourite *laughs*. The lingerie in these pictures is from Lingerie by Hollee and is called Blossom priced at 60L.

AQUA have released a new subscribo group gift for males and females. The females is a subscribo exclusive colour of their soon to be released Ever Song dress..

The males get this handsome Pieces of Valentine tux that matches the Ever Song dress. If you arent in the subo, simply tp to the store and join up to get the gifts. While your there, don’t forget to take a look at the 10L Limited Edition colour Ever Song preview gown that I previously blogged, you won’t be disapointed!

Dutchie Furniture continue their week of picks gifts! Today is the last day of gifts, but you will still have a few days after to be able to add the store to your picks and then get the gifts before they are removed. Here are the two gifts that were put out yesterday and today..

Please note that you get an armchair with the sofa, but SL was being a little argumentative about rezzing it for me so I could show you. The Lime Green Prestige dress worn in this picture is the Midnight Mania prize from OeEas!

Remember it takes between 24 – 48 hours for the system to recognise you have the store in your picks and don’t forget to tick the make your profile searchable box on the front of your profile.

Sassy Kitty has a group gift of these high waisted skirts in the notices of their subscribomatic.. they won’t be there for long though so hurry while you can.

The purple cropped sweater and the purple shrug are both freebies from the stack of free gifts in the center of the main store.

Lo Momo have this kawaii maids outfit as their group gift. Join the group and tap the picture on the shelves behind the counter to join in the cutesy fun!

The skin worn in most of the pictures is one of the new 50L May Skins from Heartsick. There are two sets to choose from this time both in the Meadowsweet make up.

This is the Wish version of the Meadowsweet make up. You get the Illusion and Bliss skin tones both with cleavage, freckles and beautymark options.

This is the Yume version of the Meadowsweet make up! You get this in the Illusion and the Reverie skin tones, again both with cleavage, freckles and beautymark options. Yume is the new soon to be released skin and I can’t wait for them to arrive! The lingerie worn in these pictures is the opening dollarbie from eVe.

Here are a few things for you to pick up on this lazy dreamy Sunday.

Arisaris has a group gift out in their store. You can find it on the stair way.. join the group, wear the tag and tap the picture!

*Crazy* Clothes has this dollarbie on the little table

and don’t forget to go upstairs to their discount section to grab some bargains.. there are heaps of things to choose from, below are two of the outfits I bought to show you.

eVe is a new lingerie store just opened. Now we all know how much I love the lingerie so I was there as fast as my little legs could carry me.

This is their opening dollarbie set which is just absolutely stunning. I fell in love with pretty much everything there, but I thought I would buy a couple of other sets so I could show you them.

KAT have some yummies in their Midnight Mania Board and their Lucky Chair.

The Eve dress in Turquoise is their current Midnight Mania prize.. please note these are subject to change and I don’t know if what I show today will be there tomorrow. Right now though its on the board with 75 slaps needed to release it.

The Jenna dress in Burgundy is one of the 3 items available in the Lucky Chair and this dress is super hawt! I had to take a picture of the back to show you *laughs* 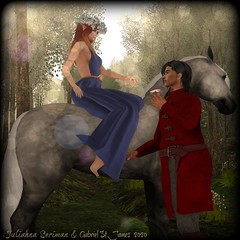 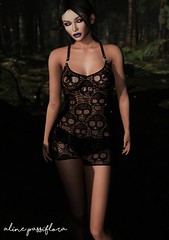 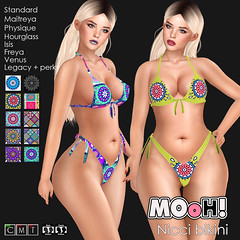