It’s that time of year when a little sex appeal goes a long way (isn’t that every time of year?).  ILAYA has several super sexy mini dresses that will have you looking like a hot little vixen this season!  The sexy little red Onyx dress is only L$50 for a limited time.  The same Onyx dress is free in mauve for ILAYA group members.  The Stella mini dress with leggings is another free Christmas gift for ILAYA group members.  The ILAYA group has a L$100 one time enrollment fee.  The classic pumps are part of a fatpack of heels Maitreya sub-o members receive when joining the group.

The retro Birds of a Feather gold earrings and necklace are the gift from Frippery in the Down the Chimney Hunt!  There is also a Bolo Tie for the men in the gift, so guys be sure to do this hunt!  The Her Ghost in the Fog Amor E Morte skin is free from HeartSick.

Also, check out the dollarbie wall at ILAYA!  I picked up this this pale pink “I Love Bad Boys” tank, cause we all secretly love the bad boys!  The pale FabFree green jeans are awesome!  After seeing the white version of these jeans from the Baby Monkey advent gifts a few days ago, I sweet talked Pixieplumb Flanagan into making a green version for the Fabulously Free in SL group.  The Fabulously Free in SL group will receive these jeans when we reach 8 thousand members!  Which should be soon!

Don’t forget to drop by Baby Monkey and pick up the advent gift for December 7th!  This lime green long sleeve shirt is free until Pixie goes to bed and changes the gift!  The Caught hairstyle comes in chestnut and dark brown and is the gift for the ladies from Shag in the Down the Chimney Hunt.  There is also a hairstyle for the men in the box!

Brickhouse Designs has new skins!  The Mia Snowy Smoke skin comes in deep tan, pale, and tan tones and is in the Midnight Mania board.  While you’re there pick up the Christmas gifts.  The bow top, panties and Wonderland stockings come in green, red, and blue and are L$10 each.

Ms. Annakiya Slone recently sent the Beauty skin to the Fabulously Free in SL group. The FabFree Christmas gift comes with a red and a green top and panties.  This gift is completely free at Brickhouse Designs.

Also, be sure to pick up the free blue Melissa in Cerulean shirt and torn jeans, cherry Madison dress, and the FabFree 7500 member gift (before we reach 8,000!).  I won the Penelope heels from the lucky board while I was at Brickhouse Designs.

‘Tis the season for a new batch of Christmas themed hunts and one starting on 6th December through to 20th December is the Down the Chimney Hunt. Its another relatively short hunt having only 61 stores. It focuses on stores with more of an eclectic range.

I was priviledged to be given a review copy of Chanimations sexy Moulin Rouge gift for the hunt and I am in utter and complete love. Seriously.. I nearly died when I put it on.

Inside the gift you get: The hat, the bustle, the gloves and 2 versions of the cane. You also get 4 specially crafted poses and a poseball with all of them preloaded inside. The pasties I am wearing in the pictures come from the Eternity Brides Giselle Open Cup set that you can buy for 1L upstairs at the mainstore. They match perfectly!

This picture shows off one of the 4 poses you get inside the gift.

This shows another of the poses you get in the package.

The feather detailing on the skirt and the hat are so beautifully done. There are no white outlines that can sometimes plague alpha textures. The textures on the skirt are so gorgeously sumptious, ruch and vibrant. There is real depth and shimmer to it  and it flows like a dream. The poses inside really capture the mood of the outfit too.

One thing that I must make you aware of though is that Chanimations is situated in an ADULT rated area and so you must be age verified to go there and hunt. 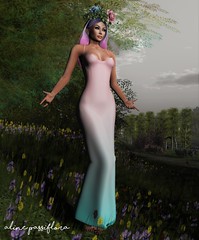 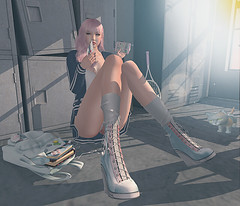 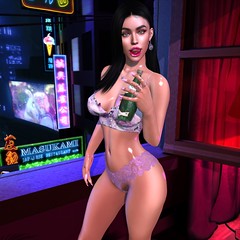