I realise Im a woman of few words these days.. but here are a few sweet items to get your paws on.

This is the male prize, but as you can see it is unisex.

I’m still feeling adventurous to try new hair so I hopped on the lucky chair at Flavor! Designs and won the Dresden Hair. This is just not one color but a whole fatpack of colors for you to try and wear.

With new hair I thought I’d try a new skin. Eternity is giving their members the Special Group Gift Skin. Not a member? Just join and look in the notices.

Blitzed is taking part in the Fashion Freaks Hunt and the gift is the VIntage Dragon Jacket. I matched it with the Stonewashed Jeans from 22769 which is their May Group Gift. I found the Brown Sneakers at In Her Shoes.

Accenting the outfit, I found the Asphyxia Belt – Rainy Night at KOSH which is their gift for the Dark Katz Hunt. And to finish off the look, The No. 45 Glasses are from December’s member lucky board.

At Tellaq Avatar Creations while waiting for the lucky chair I saw the Inside T-shirt w/ Crowbar. I was so excited about the crowbar I forgot a shirt came with it. 🙂

It’s been a crazy week for me and I’ve finally found a moment to clear out my folders. As I kick back on my porch to relax, let me show you the Lex Jacket from Style Extrem. This green jacket dollarbie is wonderfully crafted and has found a home in my permanent closet. It can be found hanging with the other colors on the wall. The PB Jeans are from AQUA that I picked up for $25L during their moving sale.

Dick Wiesel at WoE is giving us the Lundon Outfit as part of the Dark Katz Hunt. This outfit comes with The plaid shirt, grey tank and warehouse shorts.

In the back of the store at Made in the UK, I found several freebies for guys ( and women too! ) I matched the Zippered Tee with the unisex Collision Jeans and Moon and Stars Chuckers.

Also Available is the Rockstarz 2009 Tee.

I also found the Global Rockstarz Tee and the unisex Worn Jeans at Made in the UK.

As part of the Dark Void Hunt, Robbish is offering the Dark Void T-shirt. The detailing includes zippers on the sleeves and collar.

Finally, I waited several hours at the lucky chair at Tellaq Avatar Creations to get the Eddie Shape and Skin. This skin texturing is some of the best I’ve seen in Second Life. This skin can also be won on the Midnight Mania Board.

For those times when you feel like someone else is pulling your strings, RoTtEn DeFiAnCe has given us the Marionette Outfit for the Dark Katz Hunt. While I like the white shirt and black pants, I totally love the arm accessories. But I’ve got no strings to hold me down.

My Shoes are the Black Slipons from Hardies, the FabFree 13K member freebie.

I matched my puppet-like outfit with the Roan Skin from Aimesi. This is the May group gift and comes in two tones. The Cashmere is the lighter skin and the Caramel is the darker one.

I may look like Pinocchio, but I’m not lying, everything was free.

Every once in a while, we all need to show some attitude and with the Jersey Pants and Sleeveless Shirt from Trixxy’s Shop. This May group gift lets the bad ass in you show. The skull and crossbones detail on the pant leg lets everyone know not to mess with you.

For when you are having one of those days when nothing goes right, [hate this] is offering the Oh! Hoodie for just $10L.

When you want everyone to know that you are unavailable, the Paws Off unisex T-shirt found at Kissed By Lithium says it all. This shirt is part of the Dark Katz Hunt going on right now.

Show your attitude with these great finds. 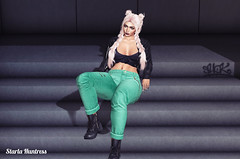 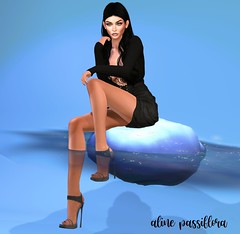 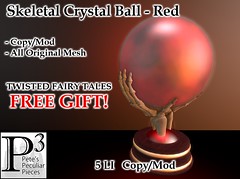 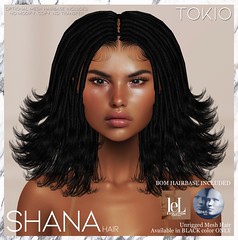 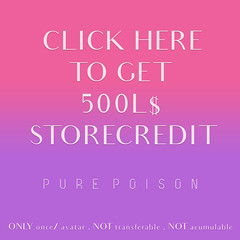