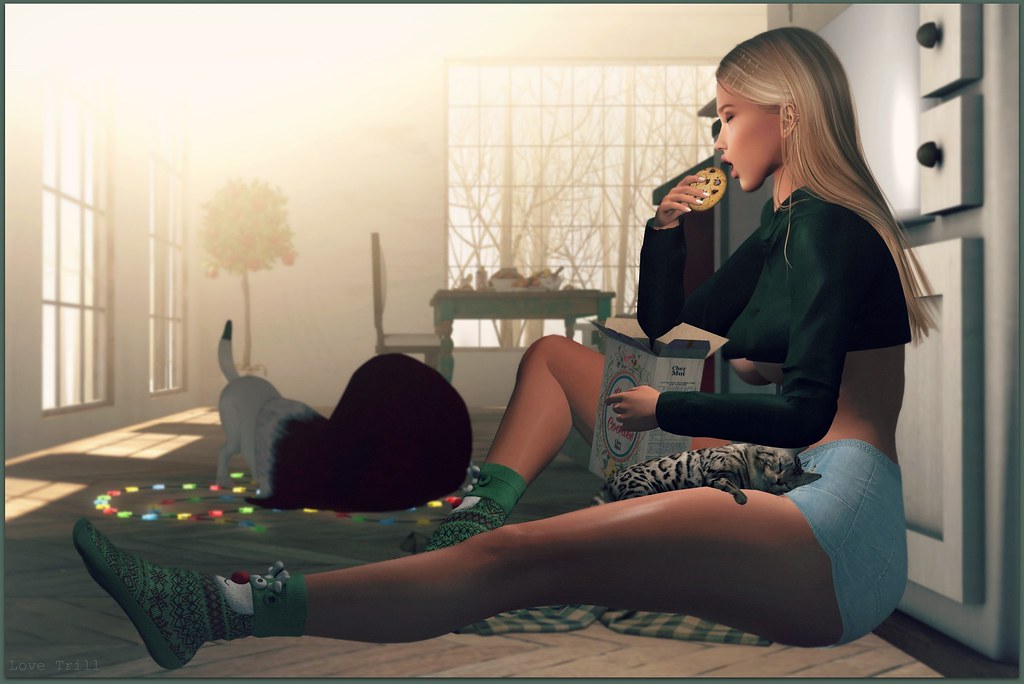 Hey there FabFree! You know what I am doing all next week? THIS… Eating cookies in my Christmas socks 🙂  I am sending you all over the place for free and inexpensive items today to work off a couple of these cookies!

Ricielli has hidden Christmas boxes around the store with the awesome prizes as shown below in the key.  I am wearing #1 which is the Kylie Sweater and #9 which are the denim shorts in my photo.  Ricielli’s hunt prizes are 15L each, and you can decide whether you want to purchase the copy version or the transfer version for gift giving.  The key also shows which body types the prizes are compatible with so have a look at the key before you click on those boxes! 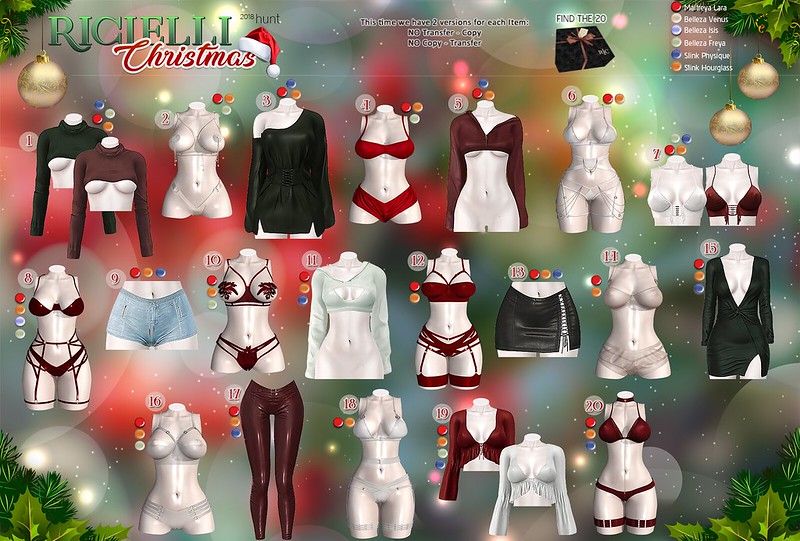 One of my favourite things about winter has for sure got to be fun, fuzzy socks, and RKKN has hooked us up with a cute sock freebie at The Shop & Shop.  These Rudolf Socks are compatible with Maitreya Lara, Slink Hourglass and Belleza Freya and come with a texture change HUD too!

MOoH! At The Gacha Life

The Gacha Life event runs until the end of the month, and there you will find the Christmas Puppy in Santa’s Sack as a freebie at the MOoH! display.  This fun holiday decor has a land impact of just 2 and is mod/copy! 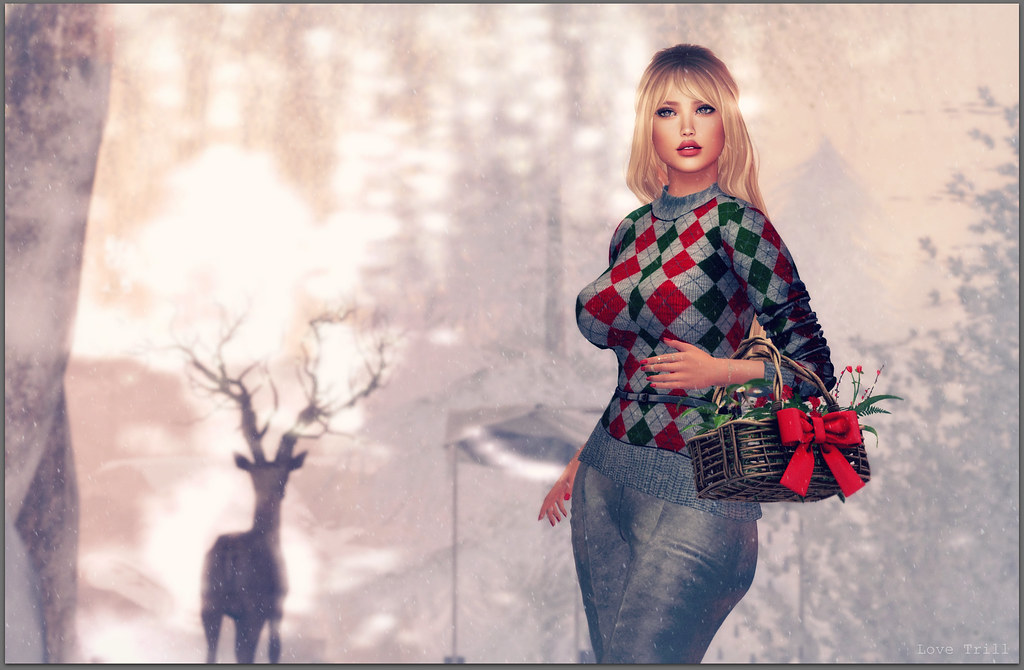 Hello there Fabulous Readers!  I have some Belle Epoque news for you today and I am going to show off the new VIP gift that was just released at TRUTH!

Get your hunting shoes on!

Belle Epoque is hosting a Christmas Hunt until December 31st and there are some really gorgeous holiday themed (fitted for Maitreya) prizes.  This won’t be a tough one as the Christmas balls are easy to find, but it will set you back 10L per prize.  The great thing about this hunt is that you can see what you are picking up before you decide to buy it with this handy hunt key below! 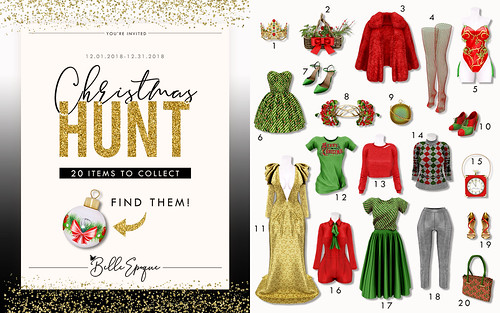 How lovely is this hairstyle?!

There’s a new group gift at TRUTH for VIPs, and her name is Teila!  As always the Truth group gifts come in a full fatpack of HUDs and includes the Hairstylist HUD with plenty of pretty options.  This group is 350L to join, but there are 12 free hairstyle fatpacks a year and how can you argue with that? ♥ 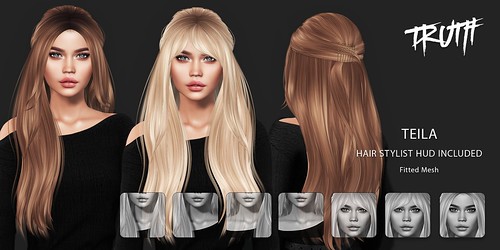 Hiya Fabulouses!  Christmas Day may be over, but there is still time to take in some holiday hunting!  On December 26th, LIV-Glam began their HUGE Sim-Wide Christmas Hunt.  This is similar to the Thanksgiving Hunt they hosted about a month back (all with hidden icons around the sim priced at 15L each.  There is a prize preview so you can just pick up the items you want!  I picked up several of the hunt items, but my favourite item is #10 which is shown above.  The Last Friday Night Outfit includes the Last Friday Night Skirt and Love On Top Jacket which are both mesh.

Below you will see a preview of all 66 prizes!  Happy Hunting Glam Girls!

When the snow is falling and the wind is blowing, normal means of transportation is sometimes not an option. I’ll show you a few alternative ways to get around in the snow. But you need to stay warm. Try wrapping up in the Polar Scarf from KOSH which is their gift in the Christmas Hunt. Another way to keep your neck warm is the White Turtleneck from INDI Designs for just $1L.

Try out the Ho Ho Sleigh from WoE. You can find dollarbie this at the WoE @ Holiday Hill location. This is a couples sled, but one person looks good on it too.

Travel by a Christmas Sleigh with someone special. Kabuki Creations has several free gifts around their Christmas tree. This animated sleigh with a team of reindeer comes with several poses for your riding pleasure.

Also from Kabuki Creations is the Xmas Gift Train. Ride around the Christmas tree that is provided and bring a passenger.

Are you comfy back there, Corri? 🙂

Prim & Pixel Paradise is participating in three hunts this holiday season!  If you are a bit tired of all the red and green, then this outfit is for you!  The entire outfit is hidden in three hunt gifts.  For the Christmas Hunt find the red & white Christmas stockings for the dark grey bulky sweater and huge scarf collar.  To get the black long curly hair with knit cap find the red bell in the Jingle Bell Hunt.  Search for the Peace on Earth Hunt globe for the knit legging damaged jeans with garters!  All the hunt gifts are inside the main Prim & Pixel Paradise store.

The black snowflake Trevor Turner Lo Chucks are a dollarbie on the front counter at ..::A.Y.Y::...  These sneakers are unisex, so drag your male friends to get them as well!

You know me, I love hunts and little store hunts are my favourites. EmJay are a little store, but they make some really cute clothing and right now until the 31st December they are having a mini hunt.

You have to find 15 little gift boxes hidden around their store and LE Tattooes next door to scoop the generous goodies. Here are the sneaky pics of the prizes instore for you.

Yay for scarves! And these stripey tops look cosey and warm. Just like the Ugg style boots.

I love this peircing set. Its very delicate and not overpowering.

There are also 3 tattooes as Gifts but SL didnt want me showing them to you. Bah!

Other info
+ June2 Skin by Curio (not free)
+ Get Forward Hair by Bishwear ( not free – and yes I am obsessed with their curly styles at the moment! )
+ Eyes by Poetic Colors ( not free but they do have a new Xmas themed freebie instore right now )

Starting tomorrow, 1st December, and running until 31st January, JE*Republic are holding a Gift Box hunt. Ten pretty little gift boxes are hidden around the store for you to find, filled with yummy clothing and skin goodies. I was lucky enough to be given a bloggers review set by the very generous Jungeun Vella and I want to give you a preview of all the loveliness you can find.

Wow! Just look at all those gorgeous prizes! I bet you are all dying to get stuck into the hunt – but remember, it doesnt start until TOMORROW! Yeah I know Im an evil tease!

Ok.. so maybe not a hunt since you just walk around the sim and pick the outfits you want (1L$ each). Warning, there are A LOT of presents to be picked up, I saw at least 50!

Lemania Indigo has a lot of hunts in and around her shops, and I hadn’t been to her sim in a while. I’m glad I stopped by, because I was able to pick up two cute outfits, one to suit my fantasy fashion taste, and the other for the Who in me.

The first thing I picked up was this Desiree Fairy outfit, which inicludes the wings, in Dragon and Rose. The entire outfit is included, and the wings alone are worth more than 1L$. Skin shown is from the Jarnia skins gift box, Hair is from Helena Stringer Mausoleum.

Next thing I got (I just couldn’t resist) was the Cindy Lou Who outfit. Although the outfit comes complete with a Cindy Lou Who hair, I’ve worn the Tekuteku X’mas Special (cream) hair, which was not free.