Here are three outfits from the Mr. Hunter Hunt. I’m starting out with a sk8r boi look. Lotus Noir has as the Mr. Hunter gift the Cruch Outfit. I’m also wearing the green Ozstarz Chucks which is the hunt gift from [BedlaM].  My skin is also a Mr. Hunter prize. You can find the Kevin Skin at [najl designs].

My second look comes from 20.FIVE. The Male Green Jacket & Jeans can be yours if you find the pipe hunt object. I accented this outfit with the Tribal Turquoise Necklace hunt gift from [ Y ] Style.

Find the Mr. Hunter Plaid Shirt, Tank, and Jeans at [Kilter]. The shirt can be worn both opened or buttoned as shown.

Anyone who is a parent can relate to this. Being up late on Christmas Eve, parts to a toy all over the floor, and directions that make no sense at all. This is captured perfectly in the The Real Santa Photo Prop from Just in the Nick of Time hunt gift in the Mr.Hunter Hunt. The pose prop comes with a screwdriver and “destructions” to make putting that special toy together just that much easier.

I’m wearing some of the gifts from the Mr. Hunter Hunt. The Mr. Hunter Shirt is from Bombshell Designs. The Black Leater Snowflake Jeans is the hunt prize at PEER Style. And the gift at [BedlaM] is the OzStarz Chucks. And just when you don’t think you’ll get that present put together, it all falls into place….Just in the Nick of Time.

I’m styling in the MENStuff Hunt gift from Rosenwolf Design. The Knit Moss Hooded Sweater is just one of the two sweaters you’ll find in the hunt gift. Also from the MENStuff Hunt is the Ugg Boots from [BedlaM]. I also found the Unisex Stripes Grey Jeans and Kawaii Scarf on the Kawaii Toast Hunt at American Bazaar. The scarf comes with a resizer for a perfect fit.

Another MENStuff find is the Byron Hair from EMO-tions. AKERUKA has a group gift for its members. The Manuel Skin is a Thanksgiving gift with a turkey tattoo on the chest.

I learned something new today. Second Life only allows a total of 38 attachments on an avatar at one time. The Dreamcatcher from Egoisme has plenty of attachments (I shouldn’t have tried to put on both the male and female outfits at once, oops). This Diamond Is Mine 3 Hunt gift has many features like an wristband with a knife attachment, an arm band, a necklace and a belt. There are boots also included.

Try matching it up with the Diamond Vest from [BedlaM]. This is also a Diamond Is Mine 3 Hunt gift and the colors blend well togther. This completed look would be great for combat or fantasy roleplay.

It’s day two of the Make Him Over Hunt 6 and I am well over half way done. Wow! This is a big hunt with lots of great gifts Here’s a peek at what i’ve found.

What a better way to spend a night in Second Life, than to go on a hunt.There are plenty of gifts for the guys on The One Night in SL Hunt. Find the Unisex Western Jeans and Blue Plaid Shirt at SLACY’s.

BedlaM has the nicely detailed Urban Boots as their hunt gift.

The hunt gift at Electric is the One Night Male Outfit

Get comfy in the matching his and hers Cookie Monster Pajamas from Flashpoint Fashions. They are transferable so you can give your special one a present like I did.

All this hunting has made me tired. I’ll catch 40 winks on the Wish Upon a Star from Tree House Treasures.

I’ll be bringing you a few more gift from the One Night in SL Hunt after I rest up.

﻿I thought I’d trick or treat on the Hallows Eve Hunt and found lots of goodies in my bag. I found the Skeleton Tee, Black Jeans & Sneakers at Serenity In The Sun Designs. The Tarantula Belt is the hunt gift from MAGICALLY ALURING.

Around my neck is the Ghoul Necklace that can be found at [BedlaM].

Bella’s is offering as their hunt gift, the V-Neck Shirt & Grunge Jeans. And you can get the Black Croc Boots at House of SOHO. There is many more treats on the hunt that I hope to show you later.

I stopped by Graffitiwear to try my hand at the Unlucky Dip game. I wasn’t sure if I wanted to bob for the prize in that or not.

But I was lucky enough to come out a winner and received the Spider Slippers as a prize. While I was at Graffitiwear, I also found The Bat Shirts. This comes in four colors and they are only $50L each, or get the whole set for $150L.

Join the Sub-o at Exposeur and get the Men’s Dufflebag Poses I used in this post. Also on the wall is the Surprise Kiss Pose. I snuck one in on my better half while she wasn’t looking. ❤ 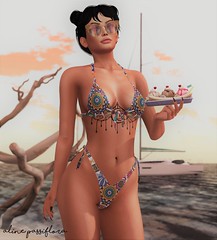