Renee Lowenhart has lost her mind! Someone’s gotta be saying that because she somehow let me spill out of my blog, A Passion for Virtual Fashion, into hers as a guest blogger. That’s because I have found some fantastic FabFree kinda content that I wanted to share with her and she let ME blog it. Beware who you let guest blog, Renee 😉

I was so thrilled to find some of the bargains on the Fountainhead sim among a group of creators in TRIAD TOWN. I IM’d Renee to tell her about these fantastic outfits for women and men and then said, let me show your readers! So here is a sampling of a few outfits I picked up from IZUMIYA for 25L each, including the shoes, accessories, and jewelry. (With all the sculpties and work on these, it’s a great bargain.) In addition, a glance upstairs at the store showed several free things for women AND men including poses (some of which I show here), a men’s suit, dress, accessories, and jewelry.

My skins are the 10L offerings from Essence this week in celebration of their 1st anniversary. Honestly, it’s quite a deal. For 80L, you can snatch up the entire line in one skin tone and have a darn nice fat pack.

The hair was another find on the Fountainhead sim at AY.LinE. Click the little box near the front counter and this fat pack is yours. It includes a color change scarf and is modifiable for size. Could you ask for any more?

The Chase of the Beast hunt started on the 1st and is a hunt dedicated to fables and animals in fairytales. You are looking for a piece of parchment with a feather quill as the hunt object and there are 53 stores involved so its a nice little hunt for you to do. The parchments are reasonably easy to find along the way so you shouldnt be held up for too long while searching.

I finished the hunt in about 7 hours and below are a preview to some of the hunt prizes you can find. There are loads of goodies! Again as with all hunt previews, there are no SLURLS, just store names.

The starting point is at LOULOU&CO

.: HLD :. has given us this Red Queen inspired dress as their hunt prize.

This complete Red Riding Hood outfit is the hunt prize from My Pinkie Skull.

Ducknipple has made this demonic heart choker for their hunt prize. I love the little horns and tail on the heart!

Acid & Mala Creations have given us this gorgeous Elf avatar called Fantasia. You get the skin, a shape and the ears. Im wearing my own shape with the skin.

Gauged have made these highly customisable pierced and stretch lobed Elf Ears called Stary. They come with a hud so you can change the pattern on the ear plugs and they are preloaded with skintones to match most skins. However you can also tint the ears using the hud so whatever your skin you will be able to match them.

This adorable Cheshire Cat scarf is the hunt prize from Panda Express while the “Who Ate” dress is the prize from The Seahole.

From left to right, this picture shows the hunt prizes from Sassy Kitty Designs with their Little Red Riding Hood outfit on the left, the Cheshire Cat set including tail and ears is the prize from PARADISIS in the Middle and on the Right is the Cheshire Cat set from NOSOTR@S Designs which also contains a male set.

This picture shows a mix of hunt prizes. The Dragon Neko Tail is the hunt prize from Psychotic Neko. The cute Bagheera on my head and shoulder are from ::Ragdoll’s Cut:: and comes with a Large Bagheera Chair also which isnt shown. The Lovely Bones headpiece is from Tarnished while the Mr Fox T-shirt and absolutley amazing Fox Belt comes from N-Creation.

This adorable cropped hairstyle with Kitty Ears is the hunt prize from ++AY.LinE++ and comes in 4 colours. You also get the whiskers shown! 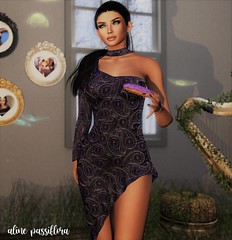 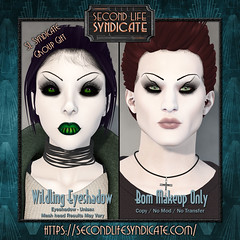 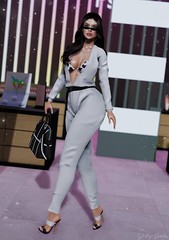 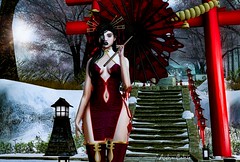