House of Xevion and AmuSe have some fun summer gifts for us!  HOX is offering this playful Taste The Rainbow Dress for subscribo members and AmuSe has these hot heels as July’s group gift.  The group is free to join.

So I might’ve arrived a little late for the fair this year… but I’m so glad I made it before it closes down. The This One Time At The Fair Hunt (TOTATF) started on July 1st but fortunately for me, it goes until the 31st! And I’m soo glad because I just started and I’m finding a lot of great stuff so far! I’m going to show you a few things and believe me, there are a lot of other treasures to find in these gold fish shaped hunt items.

The next item can be found at the fourth location and is a mood ring that you can change the color of by clicking, from Bait, as Carson already showed in his post.

The next item is an outfit from Divalicious and the 5th item on the hunt. A short shirt paired with capris and a belt.

The next is a sexy turquoise camo dress from Fuzion Fashion, the 7th location on the hunt.

The next item is a sexy pair of heels from the 10th location of the hunt, aMuse that come with a skin tone/nail polish changer/resizer HUD! (I realize I could probably have done a better job of matching the skin tone – it’s my fault, not theirs :P).

The final item I’ll show in this collection is a shirt from the 11th location, Razorblade Jacket that definitely conveys my feelings about clowns. x.x I’m also wearing one of the pairs of shorts from the 8th hunt item found at Plastik.

The blog for this hunt can be found here with hints and the starting location is Sour Pickles.

The hunt goes until July 31st, see you out there! 😛

First I’ll start with this fun pirate ship (#14), called Wicked Jolly from Wicked Beauty Light Shows.  It surprised me, when I placed it in the water, hopped on and tried to take photos, because… it sinks! I so giggled my butt off..  The ship is meant to fly – not float!  This vessel flies quite nicely and is good pirate fun!  Very clever Wicked Beauty Light Shows!

This hot pant & ruffley shirt  and corset combo outfit is called Saucy Lass and is from Sassy (#94) .  I have paired it up with an amazing pirate hat from Les Sucreries de Fairy (#65), and the boots are Kennedy’s Skull and Bones Boots (#114) hunt item.

Illy Creations (#21) has a teeny pirate printed bikini for us and a matching pirate hat!

#72 from Flashpoint Fashions comes in so many layers you can wear it just about any way you want!  The outfit includes everything shown in the photo aside from my hair.

This next one by aMuse (#28) really couldn’t be any hotter.  The photo does not do it justice!  It includes, the top, skirt & bangles.

This was a real tricky one to find, but so worth it!  The hunt item from Cudola comes with the dress, belt, stockings and hat.  I am also wearing Kennedy’s Skull and Bones Boots blogged above.

Be on the lookout for Part 3 coming soon!

The Fashion Freaks 2 Hunt runs until 15th October. The starting point is Shush! and there are 73 stores in the hunt. Here is a preview of some of the items you can find in the hunt!

The Industry District is celebrating its Grand Opening by holding a mini hunt called “The Gear + The Scroll hunt” which runs until 12th August. There are 28 awesome stores for you to find the little gold gears/cogs that are the hunt item. You can get a little notecard in the posters at the TP point to give you a story to follow along the hunt which makes it lots of fun.

DivaLicious have two prizes in the hunt.. one in their store outside and one in DivaLicious @ Industry Mall

The Bondage Corset is the other prize from aMuse which is in their outside store.. I hope this is all making sense! The goggles again are the hunt prize from Forsaken. and the Manga comic is part of the prize from Atypical which also has the sushi mouth nom shown below

The little mouth sushi is from Atypical. The Red Tech Eyes are the hunt prize from Eye Factory

The Amente lip piercing is the prize from Little Boy Blue

The Strawberry Lollipop dress is the hunt prize from Rabbit Hutch

The Wednesday skin is the female prize from Nightshade but there is also a male skin in the prize too!

I couldnt find the cog at Pinkmares House but feel free to have a look see if you can!

The Strawberry Margahrita skirt is the prize from Blow Up and the Sweet on me top is the prize from Glittertrash who also have a fat pack of Vector dress outfits in their gift box! The second picture shows the Snozberry version and the bracelets are included.

The Drama Queen skin is the hunt prize from Weird Designs

Both tank tops are in the gift from My Pinkie Skull

The Blinkered Mask is the prize from Industrial Kitty

Don’t miss out hunting for a gift at IRP Design either!

Beauty Killer have two outfits in their prize. The Alejandro outfit on the left is the male gift though it looks just as awesome on a female. Please not the skull pasties are not included, I just wore them to hide my modesty.. The Von Teese dress is the female outfit in the gift box.

The FallnAuria dress is the prize from Falln Angel Creations and is stunning. The choker isnt part of the outfit though, it is from the DivaLicious Fallen Angel dress earlier in the post.

The Juliet dress is the prize from Black Arts

The unisex tattoo is the prize from Endless Pain and is just breathtaking. Im not much of a tattoo person in SL as I can never find one I like very much, but this one I think might be one I wear regularly.

The torn outfit is the prize from Ideal Illusion

Then when you’re all hunted out, go put on your new gear and listen to some stompin’ tunes at Club Industry!

I’ve been doing the Diamonds in the Rough hunt.  I normally do not even attempt hunts because I get frustrated and quit before finishing, but I think I found almost all of the diamonds!!!  YAY for me!  So here’s some of the items I found.

The black dress shown above is #20 DYN Clothing.  I’ve shown the Gabriella necklace in a previous post.  The complete Gabriella jewelry set can be found at LacieCakes in for three different hunts.  The necklace is a delicate piece and is a wonderful addition to any inventory!  The steel blue Marilyn heels are a definate win from Heart & Sole.  The bubbles are from VIVAPOSES.

The beautiful red Forsaken dress is from aMuse.  The diamond heels are from Trixxy’s Shop and I absolutely love them!  The DIRH necklace is from ICED.

Alexohol Fashions is the very fist stop in the Diamonds in the Rough Hunt with a hot pink mini dress, bikini, and green baseball tee and cap!  The Velvet Sophia boots are from Magia.  Pretty Stick has the Licked Bruised Banana dress in the diamond.

Have a Love Affair with the Transit leggings and tank from Insatiable Fashions.  Let your DivaLicious side show in the purple mini dress and stockings.

Ohara has the retro diamond tank, plus another shirt for the men!  The Slate piercing is from iPoke.  (Sorry no close-ups of the facial jewelry, because I’m just not satisfied with my adjustments!  But, Major props to my fellow bloggers who wear facial jewelry on a regular basis!!!)  Naive has the torn Chupin jeans (which are extremely lowcut!!!!) and the white tank in the Diamonds in the Rough hunt.  The 3Ring lip piercing is from ALI Couture.

Be a little punkish with the purple skirt and black tee are in the diamond from Shush.  ROXXSTAR has the diamond necklace that is so tasty!  Or turn up the class with the Unique Clothing sequined dress and Safari jewelry set from Cailyn’s.

Indie Rose has this fabulous blue Cube dress in the Diamond.  Feel the Spring with the earring and necklace set from IrEn.  The Girls Best Friend diamond heels are from Deviant Designs.

Kastle Rock Couture has this Decadence ball gown in the diamond, perfect for an evening dance!  The Faberge’s Egg Earrings are from Phoebe.

The blue eyes and wonderfully detailed Diamonds nikini are from Zahir.  The BrokenHeart Beaded necklace is from TrOuBlEd ReBeL. 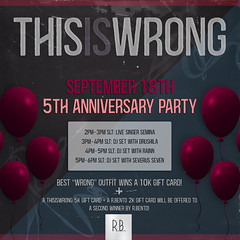 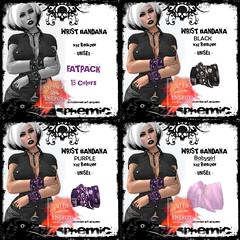 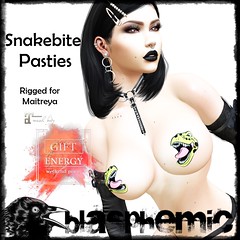