One of the sexiest dresses I’ve seen in a long time is the flirty Magdalena in silver, Leezu’s prize in the Mix&Mingle Hunt.

The delicate Lovely Heart necklace from Inca Temple is a free gift to group members. Just teleport up to the gift area to pick it up.

The skin shown in this post is the wonderful [the.obscene] gift available at their Skin Expo booth as blogged by Farah here.

The Mix&Mingle Hunt is geared towards people that want to have fun and look great doing it. Look for the interlinked male and female symbols as designer goodies are hidden inside of these. They may be hidden *anywhere* inside of the participating stores so do your best looking for them.

The singular rule about this hunt is please do not bother the designers!! They’ve worked hard to put together some amazing freebies for your enjoyment so do them a favor and make sure you buy something from your favorite locations.

If you are having trouble finding a particular hunt gift, we have setup the Total Fusion VIP List to take your questions, along with a list of hints on the blog.

There is a wonderful list of the participating Skin Fair Designers available at Scarborough Flair. Thank you Sasy for putting this together!

This skeleton avatar is cool!

Krist Tenk sent me a skeleton avatar to show you, and it’s fantastic!

Tenk Tank’s Tanglewood store will be offering this complete skeleton avatar for free until 07 October.   This is both in preperation for Halloween, and to attract people to the fantastic new Tanglewood Mall.

The Dorky Pumpkin sit is a limited time freebie from aDORKable Poses.

The dress shown above is from Coquette, and it’s the most recent subscribo gifts. This dress is suitable for everyday wear, but can sweep you from the office to the the dance floor with a simple change of accessories.

You can see more of the Amelie skin here.

As promised, here are pictures of the gift from the Italia Vire Midnight Mania board. This gown is fabulous!

The velvet skirt looks so rich and lush, it almost makes you want to touch it. The gown comes with three skirt options, two of them are rich black velvet, the other is a luxurious brocade.

Hair is from The Stringer Mausoleum, skin is from DenDou, and the hairband is included with the Carina gown.

I did an earlier post on two green gowns.. now for black.

Every time I go into Crystal Queendom, I gawk in awe of the sumptuous gowns there. These are amazing gowns, the kind worn by royalty during the high Renaissance.

Crystal Queendom is back, and just as good as ever! Most of the clothing there is very pricey, but to celebrate their re-opening, Crystal Queendom has put out a specially priced gown for us called My Lady (shown above), for  only 10L$.

If you crave simplicity in a gown, Vinyl Cafe has just the one for you.

The Boho gown comes with something like 100 options.. it’s an inventory buster, but sooo pretty. Get it at Vinyl Cafe near the outside vendors (it’s on the wall).

This next was very limited gift. I got a message that Italia Vire was offering a wonderful gown (to be blogged tomorrow), and that the first three people to arrive would get the new release, My My.

I don’t think I was one of the first three to arrive in the shop, because the place was mobbed, but Virelai Zenovka gave a copy of the gown to everyone there! Thank you!

Next up are a couple of unusual hairstyles from DarkSide.

Right now, all hairstyles from DarkSide are only 1L$. This sale will be ending soon.. so hurry over and take a look while you can still get them on the cheap! Demo’s are available in the shop for 0L$, so you can try before you buy.

Lots to show you this morning.

Renee asked me last night, “Do you want the MM from EarthStones?”

Oh course I did, and the Inlaid Spirit necklace is so much like a piece I have in RL.. love it! The MM prize includes the entire set.

A stroll around the Glance sim netted me a couple of bargains this morning.. and there was one for you too, guys!

Bellisima has this kilt for guys, and the pretty, summery dress (includes the shoes shown!) for girls. The gifts can be found just inside the door at the Glance location.

Hawk’s cool boots are from Demontik, not sure which hunt prize.. there are three of them in the shop right now.

Now, if you’re looking for something a little more risque, how about this number from UltraViolet Designs?

If you were wondering, it’s called Manteaser, and it’s available at the Naples Market location.

There are two fabulous gowns for you to pick up.. each a prize in a different hunt. One is the Pretzel Hunt prize from A/P Creations, the other is the Duck hunt prize form Mystic Sky.

The gown on the left is from A/P Creations, it’s a wonderful barmaid/wench dress with a modern twist: the bodice is zippered.  The gown on the right is Ella Gold, and the texturing on this gown is stunning.

Btw.. there is a new gown in the Mystic Sky lucky chair, it’s red and wonderful.. and definitely stop by for a chance to win it!

The main excuse people give me for not wanting to take advantage of the amazing gifts and prizes that top content designers in SL give us is because “I don’t want to go around looking like everyone else!”

I wear freebies, dollarbies, and cheapies almost exclusively, but I have never been accused of being merely “average”. Trust me on this one: Freebies will not make you look like everyone else.

Shown above is a totally “freebie” Shang, even the cross in the background was a freebie. Most of the items shown are from hunts currently in process, assuming, of course, that you’re reading this post around the time I wrote it.

Rotten Toe is a really icky name, especially since the stuff there is so cool.

I stopped there (again) to check it out after Teagan Blackthorn messaged me asking if I’d seen the stuff at Rotten Toe yet.

I’ve actually purchased stuff there (yep, I paid hard-earned L$ for their products.. this alone says something), but when I stopped by and saw all the great group gifts, I decided it was nigh time I joined the !RT group.

Shown above are group gift goodies from Rotten Toe, as well as some not-so-free stuff. Group gifts include the pink Vika hairstyle, the Long Rotten Corset, and the Doll Horns. The skin used in these pictures is a lucky chair win from Miasnow, boots are from Demontik.

Also from Rotten Toe, but not free, are the Infested Shirt in red, and the Evil Ringmaster Pants in red.

The Fnord Outfit, shown on the left, is available to everyone for 0L$.

Shown above are the creepy Visions of Death prim eyes, and the Strapped Corset — both are group gifts from !RT. 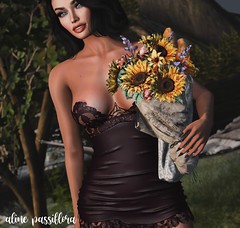 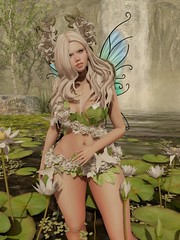