Yesterday, Seraphim was celebrating their 4th Birthday on The Indie Heights Sim, and with that a large group of very generous designers have donated FREE gifts (all priced at 0L, no need to join a group).  The party was yesterday, but I stopped in today by chance and the gifts are still out as of the time this post publishes.  If you hurry you might just be able to grab them too!

In my photo I am displaying the Lazy Chairs by Con. & floorplan which have both single and couples animations, The Apple Fall iFall Laptop, floorplan’s Oceanliner Print, Bamse Party Supplies Gift & the Birthday Bobs by Little Llama which are all free gifts within the huge selection available.

This sassy cute t-shirt is a current FREE group gift at Lemonicity, and I really can’t argue with such a sound statement! hahaha Okay okay I might be a tad biased, but I still think this tee is really fun. The shirt reads “American Girls Sweet as Cherry Pie”, and I like the pie graphic a lot. The top is fully mesh and comes in various sizes, with the graphic on the front and the back of the shirt. This shirt would be great for a 4th of July gathering in just a few weeks. The Lemonicity group is FREE to join, so don’t miss this cute gift!

In addition to this great shirt, I am excited to be showing you the latest FREE group gift from Essences. I always enjoy skins from Essences, and this one has some really great features. I’m kinda partial to the dark lips and heavy brows of this “Kendra” skin. There  is no need to join an in-world group to get this awesome gift, just head over to Essences, join the subscribo (if you haven’t already) and click the gift vendor right next to the subscribo. The skin comes in the Medium01 tone with various brow options. **Appliers sold separately.

Hello FabFree Folks! I hope you’re having a wonderful Sunday afternoon. This is the perfect time to take a look at the Lazy Sunday sales.. it being…you know, Sunday… ANYWAY…   I knew the minute I saw Plastik’s name on the list I would be in for a treat and I wasn’t wrong! 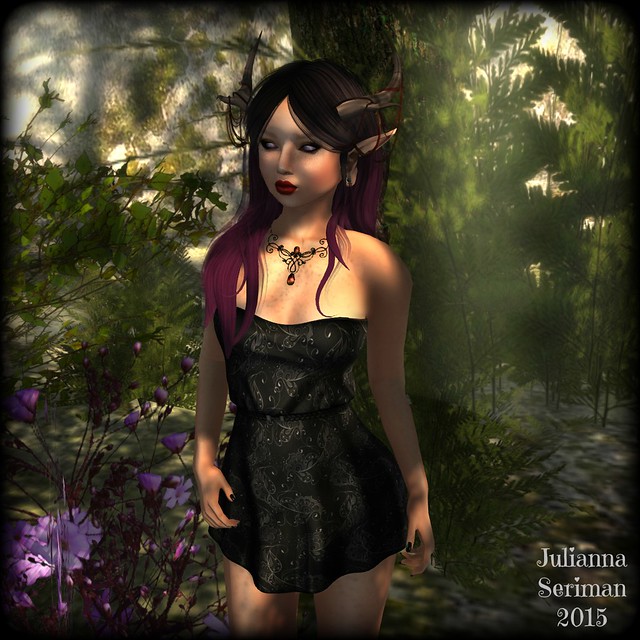 This is the ‘Nyla Dress’ in the ‘Rorye’ pattern and it’s the Lazy Sunday special for 75L.  The dress comes in three gorgeous patterns for the sale and believe me, I really dithered over which one to choose.  While I was there, I took a quick wander around the Plastik mainstore and I am so glad I did.  I found this lovely gothic style necklace in one of the 45 gacha machines upstairs. Yes, forty five machines! And most of them were 50L.  This is the ‘Furah’ necklace and it’s in one of those 50L per play machines.

Lazy Sunday only lasts until 11:59 tonight (SL time) so enjoy the bargains!

Sometimes we forget to steer our own ship. We forget that we are the captain in these turbulent seas. We let an ocean of troubles wash over us and crash us against rocks and we cry out to an invisible Poseidon that no longer rules the seas: “This is unfair!”

So, I say to the sailor — “Come back to the helm and steer yourself away from oblivion and back to the center of the glimmering sea which once rose about you in undulating waves! Do not wait on the deck of the boat while others steer your ship! They do not stand at the helm like immobile boulders! They are but human also! Do not wait for a turn at the wheel which may never come! Take to the wheel, fight tentacle monsters, dive for treasure, shoot cannons, seek adventure!”

But do it in style! Because a girl has got to look good while talking to dead men on pirate ships! And I have just the list of treasure booty to perk up that swarthy wardrobe in your empty trunk! Check it out!

If you head to LUAS they have great group gifts as well as several Lucky Boards. You have to join the group for access, but the group is FREE. I am wearing Luas May Outlaw in Black as I was lucky enough to have my letter come up when I landed! I also headed inside where they have an amazing assortment of gachas on display, all for reasonable prices. One sweet spin on the Luas Iballa gatcha and I had a Bracers, Pauldrons & Crown set in Red for only 50L (this is a great gatcha as instead of single pieces every spin gets you a full set, just a different color! ❤ for that!).

I topped the look off with a few other great accessories. [White~Widow] has a great new group gift out — a Face tattoo that sets around the eyes called “Mexico.” It comes in a color pack with 5 colors as well as appliers for Slink Visage and TMP Mesh Heads! A steal of a deal for a great FREE group gift (group is FREE to join!). The jewelry is was borrowed from the guy next to me… he didn’t look like he needed it. (Kidding!) But it is a current men’s gift set from Chop Zuey (group gift/350L to join) called Screaming Dead Men’s Choker and Ring and was easily resized to fit a lady.

Be sure to check out the Sim I visited! ROSSAVIK – Hell’s Gate Island is a zombie and steampunk with damage enabled and aliens, zombies, and tentacles abound for you to zap, shoot, stab or otherwise have fun attempting to battle! (It took me more than a few tries to get my pictures taken as I kept getting eaten!) — but it was loads of fun! 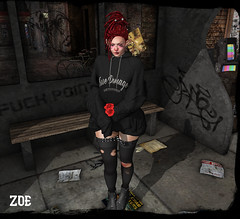 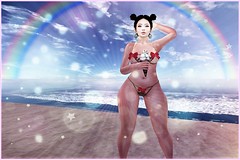