We have three new gifts in The Gift Gallery at FabFree Headquarters this week! Even one for the guys 🙂 (YAY!).  A big thank you goes to Tiffany Designs, The Vamp Realm and B!asta!!

**Each day, here on the FabFree Blog, we will be featuring one of our Fabulously Free in SL inworld Designers.

Photos are work of the designers.

Heads up fabulouses!  Pink Fuel has a free group gift in the past notices of the group (dated May 8th!)  The group gift includes the Pin kFuel Harley V2 <Crystal> skin and let me tell you…  This generous gift is packed with goodies such as Omega Appliers, Slink Hands & Feet Appliers, lots of freckle / button nose tattoos, eyebrow shaper options, blush, lipstick & eyeshadow and a few eye lid options too.  The Pink Fuel group is free to join and this offer will be expiring very soon! 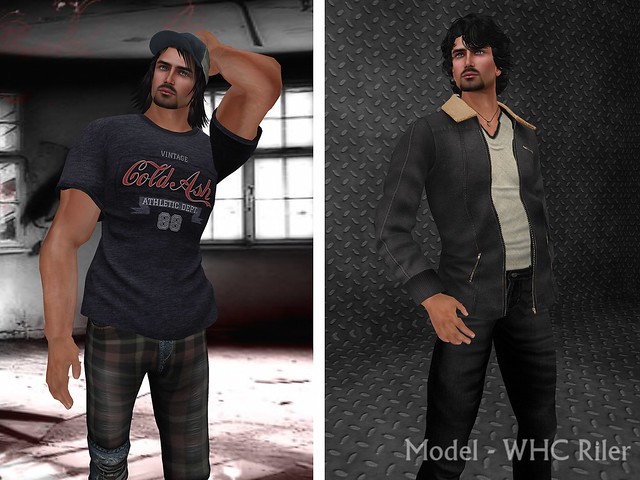 I never intended it to happen, but do you have an article of clothing that you rely on as a “go to” item, one that absolutely refuses to age? I do! And, later in this post, we are going to celebrate its one-year anniversary in my wardrobe. First though, check out what I found last night! I went by a store named Cold Ash, which specializes in fantastically detailed, rugged-looking men’s clothing. I found this vintage style T-shirt as their FREE Group Gift! The Mesh Austin Tee in STEEL BLUE is a fine representation of the quality that goes into the clothing that Cold Ash makes. Anyone who knows me knows I am a sucker for T-Shirts that look soft and well-worn, and this ribbed cotton T-shirt hangs beautifully with soft, realistic folds. It’s like it was never meant to be taken off. In the FREE Group Gift, you get 3 sizes and an additional 2 sizes in fitmesh, so getting a good fit won’t be any problem. Stop by Cold Ash, this is a must pick up! The pants I chose to wear with it are the current FREE Group Gift from Lavarock, likely my favorite male clothing store on Second Life. They are the Destroy Male Jeans and are probably one of the grungiest items in my wardrobe. I love the texture on them. Honestly, if I ever move to Seattle to pursue my dreams of alt-rock super stardom, these are the jeans I am going to wear! They come in 2 styles, with five sizes of each included in the gift. The only problem is they have been out for quite a while, and at the moment I am unable to say how much longer they will remain available. If you like them in the picture, go get them immediately. I suspect they may not be available much longer. The last item in the Cold Ash inspired outfit is the cap, which was just one of those lucky finds you sometimes run across accidentally. It is a 1L hunt prize from a hunt which is sadly already over. Luckily, the owner of Ashmoot forgot to pick up the hunt prize! It’s only 1L and the cap matches the T-shirt wonderfully. Sadly I can’t recall the name of the hunt, but you are looking for a hunt object shaped like a mask called “P-H Hunt # 8”. Look for it where you find the daily prize boards. Kristabel Ashmoot promises me she will leave it out until the end of the month so we all have a chance to grab it (a VERY sweet thing to do for us). Be sure to pick it up before it’s too late!

I teased you that as I write this I am celebrating an anniversary of sorts, and I have Lyrieal’s Boutique to thank for it. I recently attended “Just For Him”, a cart sale like event with a 1L mini-hunt where I found this great leather jacket! It comes from Lyrieal’s Boutique and is their Just For Him Hunt Prize. It has a hud that allows you to choose 5 different colors in both the leather and the lining. For a single linden, that’s great value. The event is not a large one, but I should have known Lyrieal’s Boutique would have something special out. This brings me to the anniversary: I was dying to show you this jacket and was having trouble finding just the right pants to present it with, so I decided to go with my “go to” grey system jeans and Mesh boots, tinting the jeans a bit darker to match. After doing the picture, I began putting together this post, and found I had reason to smile. Those beloved jeans and boots of mine are from a hunt one year ago today…and were previously blogged here by a young guest blogger. Coincidentally, they also came from Lyrieal’s Boutique! So, to celebrate the one-year anniversary of their posting in Fab Free, the In The Pink outfit has been added to the 1L hunt prize, making it even better. It is a great looking outfit and the jeans are tintable to match a wide range of grays, so they are super handy to have around. Even the boots are nice, you can’t beat this value. I had originally planned to end my post here, and call it a night, but once I get going I am hard to stop. So in the spirit of “You really should check out the Just For Him sales event”, here is a final addition to my post below! 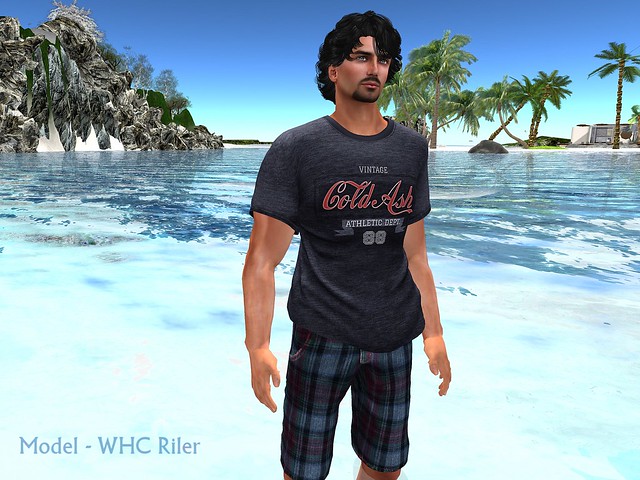 While I was at the sale, I noticed a pair of shorts on the back wall of the booth belonging to the store Trashed. Just like the other coincidences this week (the hat which looked great with the T-shirt that was accidentally left out, and the nice jeans I decided to wear being posted to fab free exactly one year ago today) these denim shorts look like they were made to go with the Cold Ash T-Shirt I picked up this week. The Trashed Men’s denim shorts in plaid are not free, but this is a sale event as well as a hunt and these shorts look really great. If you love that T-shirt as much as I do, that is reason enough to pony up the extra 85L for these shorts to go with them. They make a fantastic pair together. Once again, I have worked late into the evening and I must go, but this has been a post full of pleasant surprises. Until next time my friends, see you on the grid. —–WHC Riler

Ball Cap – Ashmoot Acc Coll_Unisex Cap #01  (1L/Hunt Prize)
Note- The hunt is over but the prize should be out til the end of the month!

Hair Under Cap – From inventory, heavily modded for picture.

Leather Jacket – Lyrieal’s Boutique Leather Jacket {His} (1L/Hunt Prize)
Note- The “In The Pink” outfit including Jeans and Boots has been added to the same box now for extra value. 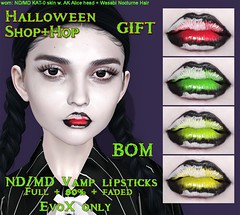