Hello Gorgeous! Today I want to show you a gift Faboo sent to all their subscribers yesterday.

I’m doing a really quick post ’cause as I told you yesterday I’m celebrating my city’s spanish foundation, and today I’m going to a concert to listen to a band that I’ve been enjoying a lot lately, they are the Swing Original Monks, a band from Ecuador that does a fusion of different rhythms from cumbia to Ecuadorian music and even to electronic music and their lyrics are urban poetry. So I’ll might dance a little at the tune of Tucán (Toucan) or Grita Pregonero (Scream Town Crier). 😛

Im a bit of a forever child. Im sure I’ll never grow up! Add that to Christmas and Im a bouncing ball of excitement. Its my most favourite time of the year.. the time when people are just that little bit nicer to each other and the magic and sparkle that is always in the world is seen by more than just a few who can see it throughout the year.

Being a forever child though comes with its drawbacks.. Impatience is the worst of them and I never really did learn to have any even after one Christmas when I was a little girl…

Every year we would be given Advent Calenders by my parents.. usually ones that had a piece of chocolate behind each door for every day leading up to Christmas. Well, children and chocolate and having to wait to have to open doors to get that piece of chocolate, isn’t always a good mix! I remember one Christmas when I was around 10 years old, I took matters into my own hands! I sneaked downstairs in the middle of the night and carefully opened the top of the Advent Calender, trying so hard not to rip the box. I slid out the foil covered tray inside and poked my finger through to get a few more chocolates.. then slipped it back in and sealed it up before running back upstairs to bed, gleeful at my success as I devoured my chocolate prizes while under the covers.

I did this again the next night.. a few more down! Was it really this easy? My parents never suspected a thing as you couldn’t see it had been tampered with from the outside as no doors were open that shouldn’t have been and they never watched me opening the next door the following mornings so they didn’t know there wasn’t anything there. The next night however, I was caught out by my Dad who had come down to get a glass of water! Busted! I got a bit of a telling off, but in the end he was more amused than annoyed and he kept my secret from my Mom who never found out.. on one condition, that I would eat the chocolate every day as it was supposed to be and try to learn some patience!

If you want your own Advent Calender this year then Trompe Loeil have this gorgeous one as a FREEBIE at The Arcade Gacha Event. It is to be used in conjunction with the keys that you win from their gacha machine there, but even if you don’t play, it makes a beautiful Christmas decoration!

Patience really is a good lesson to learn when playing Gachas!

**Each day, here on the FabFree Blog, we will be featuring one of our Fabulously Free in SL inworld Designers.

Photos are the work of the designers. 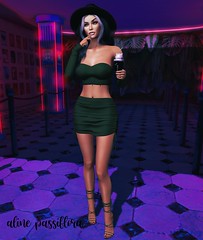 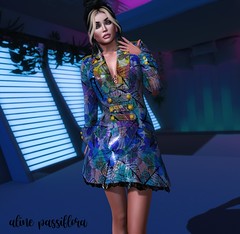