Good morning Fabulouses!  YAY!  It’s Thursday 🙂  Know what that means? It means it is one day closer to the weekend *cheeeeeeers and claps with her slink hands*, but also it’s 55L Thursday at LIV-Glam.

I know…  I have gone over budget by about 45L, but this week, I was blown away with their offerings and I wanted to share with you the “Where Have You Been” Vest and Dress Set.  This is one of the outfits available for 55L at LIV-Glam.  I am dying to try this vest out with a pair of jeans and a turtleneck too!  While you are down there, slap the subscribomatic for free gifts and check out their wide variety of group gifts too.

The skin I am in today is Mirror Enigma‘s brand new release of Heather, who is simply stunning!  If you haven’t tried on Mirror Enigma’s skins yet, you simply must try the demos.  I know – right now you are thinking…  “Where is the free stuff Love – get to it!” and it’s coming, I swear!

While this skin is not free, in the notices of her group (unadvertised in the store!)… you will find several makeup layers that fit perfectly with this skin allowing for tons of lips and eye combinations.  In the pack there are six variations of eyes (some with lashes, some without) and twelve lip variations (some with teeth, some without).  The Mirrors Enigma group is a little different to join than most out there.  You must make a purchase in store for the auto invite to the group – however there is no fee to join from there to get in.

The sharp up-do I am wearing today that allowed for a beautiful display of the collar on my vest is 1L on marketplace in the Herv Faenzo Marketplace store.  The Uffie Hair was originally shown by Care in September (here) in white, however I am wearing a blonde shade.  This hair came in a fatpack of colours as well as hairbases!

The U&R Dogs Ma Mere l’Oyle Pierced Earrings have been shown plenty of times here on FabFree – but are still fabulous an still free at the FabFree Headquarters!
*************** 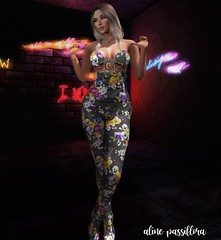