The musical Sweeney Todd was released when I was in high school (don’t do the math, please). I thought the music was fabulous, and must have worn out the grooves in my Original Broadway Cast recording. So, when I saw a picture of this barber chair as a prize in the Sinister Steampunk Hunt 3: Mysteries of the Unknown, I knew I had to have it. 🙂

Today is the final day of the SSH3, so I’m showing you a few more of my favorites from this unusual hunt. My outfit is Mad Mae by Cog & Fleur, and includes the dress, apron, and “tool belt.” There is an extra gift set of tools set out at C&F, so be sure to pick those up – I couldn’t decided between the scalpel or the bloody hammer, but I went with scalpel. This room is by Potpourri Designs, and includes the fireplace, rug, lamps, bonsai tree, and a silver music box. There’s even a ghost in the box, but she wouldn’t stand still for photos, so I put her back. This amazingly detailed barber chair and accoutrements (mirror, table, shaving items, and posters over the fireplace) is from [noctis]. Several other interesting and grisly items are included in the box, so you’re sure to have hours of fun shaving your friends… and enemies. 😉

Mad Mae comes with a notecard explaining her very sad tale of woe, so be sure to read that. It will explain why there’s a tentacle in my belt. Well, mostly. I’m not sure what the green and red splatters are, but I’m going with chemical spill, based on the test tubes hanging from my belt. My necklace is the SSH3 gift from Cake Fox Jewellery.

Here’s a shot of the outside of the “lair.” Plenty of room inside for plotting your dastardly deeds, whatever they may be. 😉

Pose #2 by the chair

*Lyrics from the musical Sweeney Todd by Stephen Sondheim.

The Okinawa Summer Festival ends today! Sad face! But don’t let it pass you by without getting this adorable freebie there! This cute little lion doll is super cute and he’s looking for a home. I hope you come adopt him! 😉

You gotta take the good with the bad, like Love mentioning The 24 ends today also.

Another neat freebie at the Okinawa Summer Festival is this lion statue. I know it’s a bit of a culture mashup since I am on the Tromsoe Norwegian sim, but we had fun venturing around there.

(old TDR Blue item but may be available at the mainstore)

The good news is that the very sexy Alejandro Dress  in teal, black and melon shades shown in the photo is one of the dollarbies at the LIV-Glam shop at The 24 Event.  It is up on the wall at the entrance of the shop along with a few others.  I showed you another one of them last week (here).

The bad news?  Well..  It’s just that The 24 ends today, Saturday August 31st – so if you haven’t checked it out yet – make sure you head down there today!  That wasn’t so bad right? 😀

The *MM* Resin Bangles I am wearing are 10L on marketplace and are colour change.  It comes with three different styles for both left and right arms.  I moved the left bangle up my arm, and resized it up a little with the edit feature, but you can leave it down on your wrist if you like!

“Lulled in the countless chambers of the brain, our thoughts are linked by many a hidden chain; awake but one, and in, what myriads rise!”  ~ Alexander Pope

Why yes, I am wearing a giant potion syringe on my back. You just never know when a you’ll need to inject someone very large with a potion. Oh, and it drips, so watch out.

Serena sent me out to pick up a couple of gifts from the Sinister Steampunk Hunt 3: Mysteries of the Unknown. First is this awesome, unisex Mad Alchemist outfit by Brain Circuit Inc. It includes the hat, coat, pants (under the coat), gadget belt, and giant potion syringe (there are some smaller pieces for the ladies). My electrifying gloves are from Chaos, Panic, & Disorder, and are really quite amazing. I poked myself in the eye with them several times, but thank goodness this is SL and I’m fine. My skin is the men’s group gift from Story Leaf. Serena showed the ladies gift a few days ago. There are several scars, so I must have sliced my face with these babies a few times, too. Alchemy is not for the faint of heart.

The Sinister Steampunk Hunt 3 runs until August 31st, and all prizes are free.

Along with several of our very generous Fabulous Designers, Somnia has placed out a brand new gift at FabFree Headquarters this week for us to snag that has me singing all kinds of praise to Sanura Snowpaw…

The gift includes the baby blue mesh crop top in a musical theme, as well as the shirt under it, and the adorable capris with ribbon trim at the calf.

Hurry Hurry, tomorrow is the last day for the Summer Hangover hunt at the Jersey Shore. (P.S. Do NOT use Search to get to Jersey Shore.. It puts you inside a cliff… and it’s scary and dark and stuff…. ) Clar showed you the Sakide outfit in her post “Sakide Eluzion” and I wanted to show you all a look as well…. I snagged a few different outfits and combined them to make this “Look” …. I even changed my SHAPE!!!  Yes Yes, Panda Punx actually did it… they made this shape snob try something new…. *laughs*… check it out 😀

Skin/Shape:  .:Panda Punx:. Body Shop SHH Hunt Gift (L$ 10) ( I didnt wear the minidress that comes with this, but it also has a tango applier with it.  You can find this at their Jersey Shore Location.)

Shoes: [trs] Mindi Outfit – SHH Exclusive (wear) (L$ 10 ) ( I am only wearing the shoes, but you get a cute little outfit.. You can find this at their Jersey Shore location. )

key in mouth: Kennedy’s Mouthy Key (L$ 10) (Part of a sleeveless turtleneck -You can find this at their Jersey Shore Location.)

Pose: Diva Store – 01 Model (FREE) (Yes, you get a pack of Poses for free…. pick up this goodie bag @ the Diva Store! Look for a red bag with gold trimmings…. )

Shirt: Dethly Designs – Knotted T – Rainbow Skullies for GFW (L$ 50) (This is one of DD’s items for the Grenade Free Weekend that happens every Friday & Saturday @ The Jersey Shore Sim.)

Summer is winding down for me as I just got back from my last vacation.

Do you have any more vacations planned? I also went on a little vacay to Baja Norte in SL.

I am wearing the adorable Summer Hangover Hunt (ends Saturday 08/31) prize from SAKIDE. You can change between 9 colors of the mesh top and 8 of the mesh shorts using a HUD. I adore these shorts! The chevron pattern, bows, and the ruffles are so adorable! The best part is this outfit is only 10L! 😀

These earrings are from ELUZION.  I got them from their sale right now! The Wayma Earrings (9L) are shown on the  left and the Sashka earrings (10L) are on the right.

The sale ends Sunday I believe. (Yaline Sewell, the owner, sent out a two week notice notecard about the sale on August 18th.) So don’t miss all the great deals! Everything in the store is 2-50L and then it will disappear for the new collection. 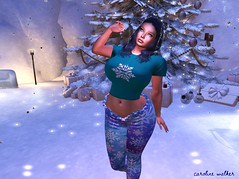 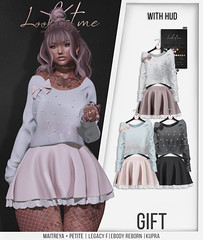