You never know who or what’s going to show up at your doorstep on Halloween. So I wasn’t completely surprised when I heard a commotion and stepped out on the back porch to find Freddy Kreuger and Tiger Lady clashing claws. I wasn’t sure who was going to win but I wasn’t sticking around to find out. I did get the info on the goods though. It seems that Freddy does all his clothes shopping at Ydea (including his wicked claw), and the tigress found her Wild Fursuit by Plausible Body on the SL Marketplace.

I heard the front door knockers and quickly closed – and locked the back door and rushed to the front, grabbed the bowl of candy and opened the door to see who was there. I dropped the bowl in shock, candy scattering everywhere   when I was greeted by two skeletons (mesh avis by Plausible Body) holding out their bags open. They were surrounded by little critters that rushed in and scarfed up all the candy and took off down the porch steps into the night followed by their undead escorts.

I found myself out of candy and any desire to answer the door for the rest of the evening. So I curled up in front of the fireplace with a good book and a glass of beer, ready to enjoy a quiet evening when I heard from the shadows, “bleh bleh bleh…”

Love and Cal are wearing:

Cal (as Freddy Kreuger) is Wearing:

2 thoughts on “An All Hallow’s Eve” 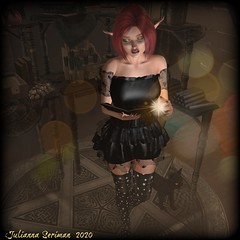 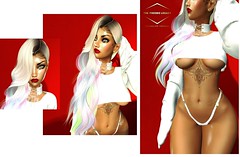