Take a trip back to the golden age of Hollywood on the Hollywood Walk of Fame Hunt. Cilian’gel 1920’s Boutique has created Got John? in honor of John Barrymore (That’s Drew’s grandfather for you youngsters). This three-piece outfit includes the pants shirt with tie, fedora and waistcoat. You also get a silver flask for your favorite beverage. The Hollywood Walk of Fame Hunt runs from February 25th to March 24th.

I have a couple more prizes from the Folklore Hunt to show you!  Again, The Folklore Hunt runs until March 15th, and each hunt item is 1L.  I found the gorgeous shimmering mermaid outfit (including the makeup tattoo and bodylight set) at Taliesin Tails & Ravenwear.  Also included in the hunt prize was the beautiful dress below.  Both items together were just 1L.

At Artic STorm, upon finding the genie lamp icon for the Folklore Hunt you will have the Fairy Nice Dress in Teal shown below that incudes a couple of different length skirt options for a less formal look.

IKON has released their group gift for March and you can pick it up with your free group tag activation until Sunday, March 4th @ 8PM SLT.  The group gift is the gorgeous and realistic Utopia Eyes in Pale Mint & Gold.

I must be feeling nautical today….. or the very least getting my pirate on.  🙂 Here are a few more gifts from the Steam 6 Hunt. The Sea Voyager Outfit from Brain Circuit Inc. has some interesting details from the eye patch to the rolled map and telescope. The Steamy Nautical Ramp Boots are the hunt gift from Pop Tart & Urban Assault. The black knee-high boots are adorned with hooks, anchors and ships wheels. My friend flying around me is the Steampunk Raven from Raven’s Heart. The raven slowly flies in a circle wherever you place it. I attached it to myself so he wouldn’t fly away. 🙂

I started the Folklore Hunt yesterday and there are so many magical folklore themed items to be found!  The hunt runs from February 15th – March 15th, 2012 and all items are 1L each.  The beautiful White Witch dress adorned with pale pink butterflies is the prize you will find at Wild Serenity and the beautiful animated wings were inside the genie lamp icon at Pyewicket’s Myths.  You can find more information about the Folklore Hunt at the Official Blog – http://itouchhunts.wordpress.com/

The long, curly and super flexi hair I am wearing is called Janey and is free in the shade of Strawberry in the Alli & Ali Marketplace store until March 18th.  Again, this is mod, so you can play with the colours a bit if this shade isn’t your usual and you are semi-useful with the edit feature. 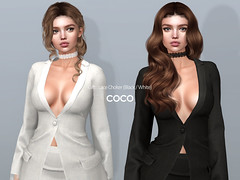 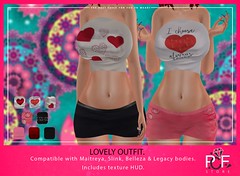 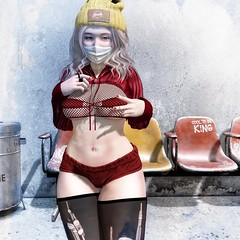