Sasha’s Designs group gift for October is the stunning gown in the photo above which you can pick up with your group membership.  The group membership is 50L, and it will not only enable you to pick up this dazzling gown, but years worth of group gifts!   It doesn’t get any better than that –  Thank you Sascha!

There’s lots of lucky boards at SELECT SHOP filled with amazing prizes.  I was lucky enough to win several of the prizes to show you.

All these gifts and more can be found in the SELECT SHOP lucky boards.  Don’t forget, the Sarah hair is a L$95 fatpack special at ChiChickie until midnight tonight!

/me jumps on the big pink party bus!  Who’s coming with me?

Wearing my pink cheetah printed Arnadi Knot Top which you can pick up for free as it is #85 in the Make Her Over Hunt, and Koko Black Leggings (group gift!), I’m ready for a girl’s night out on the town!

LOVE has a couple of hair freebies that come with a colour hud that gives you the flexibility of a fatpack of colours.  Gotta love those – they take up hardly any space at all in your inventory!  The hairstyle below that is semi-pinned back is called Agitha.

My super cool glasses are #002 of the Make Her Over Hunt from Kumaki.

I am so excited to tell you about these shoes!!  N-Core has these babies at The Fashion Garret for ..  50L!  What a steal 🙂  They are super glittery and a must have!  Thanks for giving me a heads up about these Blondie!

The photo to the left/below shows the second hair freebie from LOVE.  This one is called Melanie and is a long style swept over on shoulder – and again it comes with a colour hud.

MEILING Couture is celebrating 6 months in SL with the unreleased Bossiere Casual Gown.  This gown is available for group members until midnight tonight, so grab it NOW!  The MEILING Couture group is free to join.  Also, don’t forget to pick up the 6th month anniversary gift card since it will expire at midnight.  I accessorized with the pitch bandana scarf and signature canvas tote.  Both are from MEILING Couture and available free in the center of the store.  The half frame glasses are only L$25 at bYOU.  The Seduce 3 skin is a new gift from Bare Sensual only available at the Fabulously Free in SL headquarters.

The Mayor of Munchkinland wouldn’t let our guild greet Dorothy. Something about smoking being bad for her. *shrugs* As if lollipops are any better, too much candy is bad for you too. I found the Boy’s Munchkin Outfit by Dimbula Rose on the Mocchi*Mochi Mall Halloween Hunt. Look for pumpkins scattered all about, but some may be empty. I also found gifts from Amato. The Cigarettes and Poses were in two of the pumpkins and I also found a Cane, also from Amato.

I Stopped by In Her Shoes for a matching pair of shoes. And sure enough I found the Autumn Sneakers to match my shirt.

The White Armory is so very generous with their group gifts! They have been changing out the women’s group gift every Sunday since I have joined their group – and each of them have been so beautiful. This week I picked up Poison Ivy, which is the long gown I am wearing. The train goes on for miles and they have even included the hair this time!  You will need to send a note card as requested on the sign as there is no group joiner in store, however the group is free.

The sweet skin I am wearing is Mamboo Chic‘s Megan which you can pick up for free by simply being a member of their group! The group fee is 300L but the gifts have been A+ quality and plentiful. I love wearing my Mamboo Chic skins!

Do you love magical fantasy related SL stuff?  November 9th through the 23rd, FabFree will be sponsoring the Neverwas Is Event on The Wash sim.  If you are a designer or know a designer who may be interested in this whimsical event grab an application out of the Fabulously Free in SL group notices.

There’s also a mini Halloween hunt going on at Japan Fancy Island with gifts from  *.amato.* and Dimbula Rose.  The hunt began October 7th and continues through October 31st.  Find the 7 pumpkins from *.amato.* in and around the store for the caged obake hat & wand, obake bags in clear and rust, pumpkin lolli jewelry set, yellow and puple camis, dark and light tanks (for men), cigarette smokes, denim shorts for men and women, and a pack of 7 poses.  The Candace hair is a L$5 offer on the side wall at  *.amato.*.  Pick up all the other gifts while you’re there!

Dimbula Rose has a gift for the women and men in the Halloween hunt at Japan Fancy Island.  The women’s gift is a Munchkin girl costume with dress, socks, hat, collar and tie.  There are decoys everywhere so look carefully!

All pictures were taken on the Japan Fancy Island.  It’s really laggy there because of the hunt, but still beautiful to explore.  Stay tuned cause Carson will show the male gifts later on today. 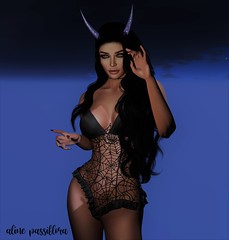 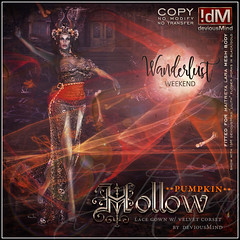