Some of the stores at Second Style Island are participating in an event called Week of White which runs from 9th July to 16th July. These vendors have either set out existing items or created special edition items all priced at 50L for the whole week. There are some great finds here so I thought I would show you a little of whats on offer..

First off, Sn@tch has a freebie outside their store for the event called Faking Innocence. Ivey has also reduced all packs with something white inside down to 50L. I picked up a couple of outfits to show you..

Is called A Textural Experience. This is the white top with the grey pants, which is one of a few colours in the pack. You really do get a great deal with these sets for 50L as you get more than just the white.

This one is called Meadow Maze. The skirt is sculpted so may not be suitable for some AO’s however it is awesome and I love it.

And this one is called Its warm in here.There are about a dozen sets inside the store so make sure you check it out.. The jewellery and belt are the True Romance set by Rhedd Night Designs found at the AQUA SSI Store . .

The shoes worn in the last Sn@tch picture above are the Week of White contribution of Heart & Sole. They are HUD controlled to help match the skin to yours and also come with metal options and toenail colour options.

Heartsick have set out five skins in a limited edition make up called Feather which will only be available at the Second Style Island store and for this week only. These skins preview the new base as was shown in the July 50L released last week. You get freckles options and 3 cleavage options as shown below.

This show the skin tones you can buy for 50L each.. From the lighest, Illusion, Reverie, Bliss, Rapture and Umber.

Mina hairfashion has the Jean hair style in White

AQUA has several things up on offer and has partnered up with Rhedd Night Designs to offer matching jewellery included in both outfits.

Renee blogged the White Ever Song dress yesterday but I had to show it to you again because it is simply stunning. The jewellery was created especially to compliment the dress and is free inside the pack in both gold and silver metals.

This is the Parisienne Rhedd in white, again with matching bracelets included in a cute pink colour.

Timmy has several things set for 50L in white and white/black, but I was quite taken with this white vest. The jewellery in this picture is also by Rhedd Night Designs called True Romance and you can find it outside the AQUA SSI Store

This sexy see through shift dress is from Sheer and is simply stunning. You could wear a shirt or bra underneath if you didnt want to be quite so daring.

Where as they arent participating in the 50L Week of White event, Nyte N’ Day are having a Whites sale

The Prost Dress in white was reduced to 100L, the stockings are included

It’s bikini time again and I have quite a few to show you!  First of all the beautiful Jade skin is a gift for everyone from Tuli until the 11th!  The makeup is subtle with a light shimmer of pink on the lips.

The No Name Bikini was recently sent to the Pig sub-o members.  I accentuated with the Ripley jewelry set is from Burroughs Jewelry.  Each piece is an introductory price of L$99.  The earrings are free for about 48 more hours.

Carson blogged part of the Sleek Swimsuit from GryphonWings yesterday.  The bikini is only L$29 and pick up the shorts for L$19.  The Metallic Silver prim nails were sent to the PurpleMoon Creations update group a few days ago.

For just a dollarbie you can pick up the Blue Tiger bikini at CMORE Designs.

There are also bikini and board short sets at only L$25 at Cilian’gel!  The sets are transferable, so you can send a gift to your SO. 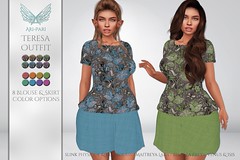 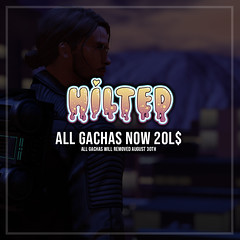