AQUA have a few things going on right now for you all to take part in. Firstly they have their new release called Chained Heat set out for Black Friday for the special price of 50L

This offer is for a limited time so be sure to get it while you can. There are other colours set at their regular price instore too.

Starting today and running until the 5th July, is the 4th of July Hunt. You are looking for a Firework as the hunt object and there are 7 for men, 7 for women with the outfits spread out over these. Carson already showed you the male items in the hunt. These are the female prizes.. You get an old favourite called Dream Easy, which has been given a little make over before its re-release, and a sneak preview at two upcoming releases called To The Maxx in white and Lusty Lace in Blue.

And if you go over to the store tonight (Friday 2nd) for the weekly AQUA  Street Party, you can pick up this awesome freebie Cheerleader outfit!

The skin worn in the bottom 2 pictures is by TULI and is their new 65L Gina skin at The Dressing Room. The hair you can find in the notices when you join the D!va Hair group. There were two hair gifts in there when I looked, so make sure you check quickly. You can find the group by going to the store or joining through my profile. 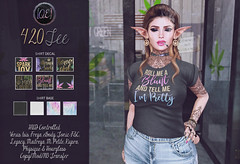