Anoushka Feden of Kawaii sent over a little note and gift letting me know about special deals at her store.  The copper denim shorts and strapless top are in the welcome gift when you join the Kawaii sub-o.   Also, the Loose Summer dresses are discounted at L$75 each or L$550 for the fatpack.  I am wearing the black floral dress because it looked feisty!

There are hidden dollarbies and L$10 items throughout Insatiable Fashions.  Below you can see some of the dollarbies I picked up.  There are many more available in store!

Today is one of those days where I have a lot of bottom pieces of outfits, but not tops.  Of course I couldn’t go topless, so I decided to use a few of the gifts from the Mashooka hunt (which btw ends in a few hours) to show off these gifts.  The black High Waisted skirts were sent to the Sassy Kitty Designs update members last night.  There are seven black skirts included with black, blue, brown, pink, purple, red, and silver buttons!  The golden Drew blouse is part of a gift in the Mashooka hunt and is busting hot!!!

The Miamai subscribe-o-matic group received the cream Amanda skirt this morning.  The dark rose Tristin blouse is one of the gifts in the hunt at Mashooka.  The brunette Cara hair is free at EMO-tions for every 200th visitor.

Wanderer the Wind @ Nenashigusa Nest has some extremely beautiful lingerie at amazing prices. Evelyn Hartshon gave me the heads up about this place earlier this evening before I crashed and SL wouldnt let me back in. I think it knew I was about to buy up the whole store so it denied me access until I calmed down a little *sneaky SL*

When I did manage to get back in, I snapped up a few of the goodies to show you and tried to keep my head about me.. well you know me and pretty undies. Hey, a girl has to have a collection of something, right?

The first few I have to show you, can all be found stacked on the shelves. This is a small selection of what is available there and there are several other styles at similar prices.

ver27 white is such a cute and flirty night dress and a steal at 85L. You can also choose to wear it without the prim parts as a bustier and panties set, which looks just as sweet.

These last two are found up on the walls of the store and are part of the main store collection, but again the prices are amazing so I had to show you a couple of the styles you can buy.

ver24 flower white is absolutely stunning and again comes in a range of other colours. It is priced at 70L

Other Info
+ Meadowsweet Yume May Skin by Heartsick ( 50L )
+ Elf Ears by Gauged ( ex-hunt gift .. Elf Ears are usually 300L but there is a 1/2 sale this weekend (thanks Evelyn for that info also) so they are 150L )
+ Maia hair by Truth ( not free )
+ Poses by Long Awkward Pose, Kuso, Persona, Glitteratti, Diesel Works, Striking Poses

Reasonable Desires update group members can also get the Nikki lingerie in black.

The Victorian Corset and Lingerie set is a new release from Reasonable Desires.  This retro lingerie is only L$150!  The Simple Satin pumps are in the pink gift box at Cattiva e Cattivo.

If your looking for a Victorian steam-punk look, the new Victorian Day gowns from Reasonable Desires are L$299 and come in black, red, and a stripe version (not shown).  The gowns include the black lace umbrella with has an open and shut option.  The flexi Big In Japan hair is a gift at EMO-tions and comes with black, blonde, brown, dark brown, platinum, plum, and red hair colors.

As you can see.. it got to Sunday and mah brain stopped working for a post title. Oh well. Onward to the goodies!

CStar have a new Limited Edition skin of the month out in their Lucky Chairs. Twelve sets of skins to be won, 6 skin tones with 2 different make-up/effects on the skins.

Here is a close up of the make up on the skin.

I was stalking it for a while and I finally managed to win the Pale set to show you. You get two tones in each skin tone pack. A light and a darker version. I really need to make an alt with a more widely loved letter as the initial! W is not a Lucky Chairs favourite *laughs*. The lingerie in these pictures is from Lingerie by Hollee and is called Blossom priced at 60L.

AQUA have released a new subscribo group gift for males and females. The females is a subscribo exclusive colour of their soon to be released Ever Song dress..

The males get this handsome Pieces of Valentine tux that matches the Ever Song dress. If you arent in the subo, simply tp to the store and join up to get the gifts. While your there, don’t forget to take a look at the 10L Limited Edition colour Ever Song preview gown that I previously blogged, you won’t be disapointed!

Dutchie Furniture continue their week of picks gifts! Today is the last day of gifts, but you will still have a few days after to be able to add the store to your picks and then get the gifts before they are removed. Here are the two gifts that were put out yesterday and today..

Please note that you get an armchair with the sofa, but SL was being a little argumentative about rezzing it for me so I could show you. The Lime Green Prestige dress worn in this picture is the Midnight Mania prize from OeEas!

Remember it takes between 24 – 48 hours for the system to recognise you have the store in your picks and don’t forget to tick the make your profile searchable box on the front of your profile.

Sassy Kitty has a group gift of these high waisted skirts in the notices of their subscribomatic.. they won’t be there for long though so hurry while you can.

The purple cropped sweater and the purple shrug are both freebies from the stack of free gifts in the center of the main store.

Lo Momo have this kawaii maids outfit as their group gift. Join the group and tap the picture on the shelves behind the counter to join in the cutesy fun!

The skin worn in most of the pictures is one of the new 50L May Skins from Heartsick. There are two sets to choose from this time both in the Meadowsweet make up.

This is the Wish version of the Meadowsweet make up. You get the Illusion and Bliss skin tones both with cleavage, freckles and beautymark options.

This is the Yume version of the Meadowsweet make up! You get this in the Illusion and the Reverie skin tones, again both with cleavage, freckles and beautymark options. Yume is the new soon to be released skin and I can’t wait for them to arrive! The lingerie worn in these pictures is the opening dollarbie from eVe.

The best place I’ve found to gear up a new avatar is at the freebie board at MADesigns. Several designers have contributed to this board with some fabulous freebies. *FIR* offers the Shamrock Jeans and Royal T-shirt. This was one of the first outfits I wore as a noob. this outfit even comes with a wristband.

SHIKI brings us the Khaki Trousers and Blue zip up sweater. These trousers were a staple in my wardrobe and I still pull them out every so often.

I would also match the SHIKI Trousers with the Brown Cardigan from Young Urban. I always like a layered look and this fits the bill.

For a beach casual look I matched the kPANGA Board Shorts and the Reek Conversation T-shirts.

If you like these outfits, make sure you stop by the designer’s shops by clicking the links below and check out the other great clothing each of them have for sale. 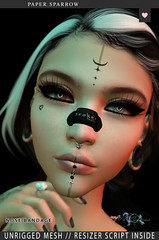 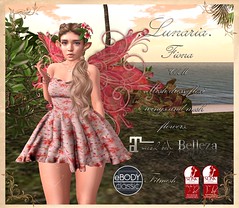 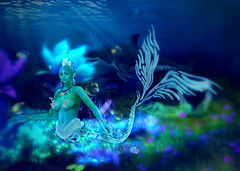 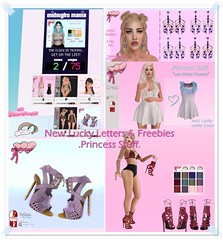