Been away for a few days with real life dragging at my heels, so now Im back. Hopefully for good! Hooray I hear you cry… or at least… I hope *listens intently… only hears a pin drop.. pouts* Hehehe. Anyways, I have a few things to show you. So are you sitting comfortable? Then we shall begin!

The Zombie Popcorn hunt started a few days ago and there are some amazing gifts. The starting point is at The Zombie Popcorn HQ and it runs until May 2nd! You are looking for a red and white popcorn bag.. I’ve been trying to select some of my favourite items to show you from the hunt to give you a teaser, but it really is hard to do!

Bliss Couture have this gorgeous sparkly top as their hunt prize.. but I think it looks equally stunning as an uber uber mini dress.

These cute Smug boots are the prize from Ducknipple. The foot is colour changable via touch.

Plastik has a Zombie Stage 2 skin as their hunt prize which also includes a male version aswell as a female version and 2 sets of eyes. The hair is the hunt gift from Amacci.

POSH! have these two Zombielicious hairs as their hunt prize. One in Cherry and one in black.

Fallen Style has this stitched mouth skin for their hunt prize.

Glam Affair has this glamourous Sofia skin as thier hunt gift because every Zombie movie needs a glam femme fatale who will eventually get their brains nommed on.

Berries has this cute outfit as their hunt prize which also includes the hairstyle which I just love.

The skin worn in the other pictures is the group gift Elle skin in the new fair skin tone from Belleza which costs 250L to join. Just join up and check the notices to recieve. It comes in all skin tones from Fair to their new Mocha tone.

5 thoughts on “Come and get your candy” 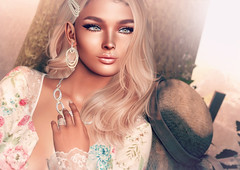 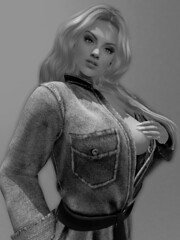