Although partially true, I couldnt resist using the name of one of the poses I bought at the Penny Dreadful Arcade closing down sale. All poses are reduced to 10L so if you want some awesomes new poses, run over and get them while you can as they close at Midnight SLT tonight, Sunday 7th March.

Waka & Yuki have a new Lucky Board hair out at the moment. The Lucky Board is found in the middle of the store..

There are two versions up for grabs. This one with a white flower and one with a black flower which I still have to go back for.

KHUSH are having a mini hunt at their store with 5 gifts for the girls and one for the guys. Its only on for a few more days.. Just search for the little gift boxes in and around the male and female stores and along the path that connects the two. You can’t miss them!

This last one is the guys gift in the mini hunt, but it works on a girl too, so don’t forget to pick it up on your way around..

And another for the guys, but also works on a girl is this group gift from kMADd. It is a preview of their new mohawk style called Simon. Simply join the group for free, then check the notices for “Free Hair ~ New Hair Preview” and then save the attachment.

Simply put.. I love it completely.

The finger tapes worn in the pictures are from Luck Inc and are a dollarbie found on the end of one of the aisles on the left side of the store. The Star Elf Ears are the Chase of the Beast hunt gift from Gauged.

Just a short post today.. Im still recovering from all those hunts! 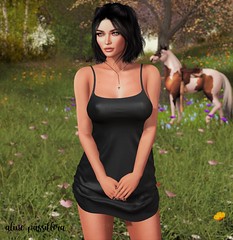