When I was at the AQUA Party last night, I noticed some men’s jeans on the wall and decided to take a peek at the prices. I found some Dark Grey jeans for only $10L. This is a promotional item as the rest of the colors, Teal, Black, Blue, dark Blue, and Red were priced at $60L.  They are called PB jeans, so I had to know what the PB was. Peanut Butter? Pretty Baby? It stands for Package Booster. I don’t think I need to explain what that is.  *chuckles*

The Shirt is from !E Eclectic Accessories. The Darcy T Shirt is on the lucky board there. This well worn tee has a few rips on the front and back to let everyone know that it is one of those favorites you just can’t let go of.

Even thought the Make Him Over Hunt doesn’t start until tomorrow, Floatie over at Hell Bop Clothing started early. Her gift for the hunt and to us is a wonderful bib and tee set she named “Oscar”. This great knock around outfit is great for landscaping, planting or just to putz around the sim in.

I always enjoy the added touches that are put on Hell Bop’s clothes. This comes with a dirty handkerchief and a pack of cigarettes. Thanks for the smokes, FLoatie. I recently quit smoking, so I can now take up the habit again, at least in Second Life.

Get an early jump into Spring and the Make Him Over Hunt at Hell Bop Clothing.

I popped over to Angelwing to pick up the extremely yummy bunny costume, but I found many more gifts to show you too!  The Anakarina angel costume comes with the white dress, leg and arm bands, wings, skin, shape (not shown), necklace, and earrings.

The Let It Snow skirt set includes he skirt, top, scarf, stockings, and even flowers for your hair!

Be the perfect Angel in the Kutiel lingerie set from Angelwing.

Also pick up the red and white Charmeine skirt set for free at Angelwing.  There’s probably more goodies to find so take a look around.  Oh and hit the midnight mania board on your way out for a giftcard!

AQUA is having a Rez Day party for my new friend, designer and owner Ayanna Slade. The party is starting NOW! March 30 from 4-7 P.M. SLT. The male gift is a do not miss out on. . This Pink & Olive Men’s Suit, that comes complete with a tie and shoes, makes a fashion statement that real men CAN wear pink. After the party the gifts will go to the lucky boards.

Get down to AQUA now and give your rez day wishes to Ayanna and grab your free gift.

I’m giving you guys (and girls) a heads up on a hot dollarbie at Dummy Wear. I found this Grey and Black striped hoodie for just 1 linden! The texturing on this is fabulous and the zipper detailing is very realistic looking.

I’m not sure how long this special will last so I suggest you drop what you’re doing and grab one. Don’t be a dummy and miss out on this great buy.

G&N Quality Design is one of those stores that I wait in anticipation for the weekly gifts!  This week’s gift includes the green and pink (great color combo, btw) floral Zarah blouse, white pants, and plaid flats.  If you received silver flats, go back and get the white ones because the texture take on the first round.

A new daily gift is available for Second Style group members.  The Dissy skirt, blue Floral Cami, and Linsay flats are in the gift from STORMCROW Clothing at Second Style.  The gifts are available for 24 hours only and since this gift was put out yesterday there’s not much time, so go now!

If your looking for some high end decor to furnish your surroundings pick up this Retro Mini Lamp from the The Gallery of the Minotaur at Grettony Villa.  The eye-catching glass lamp is a piece of art with rotating textures.

We all are on Second life for different reasons.  Some of us are here to enhance our real lives, some come to escape the harsh realities that we face day to day,  some are here to to forget, some to remember.

No matter what reasons we are here, we bond.  We make friendships and form relationships that go beyond what we ever imagined we’d find.  We laugh, we cry, we live, and we share our experiences good and bad.

We are all unique, different from each other in our own ways.  None of us look the same, talk the same, or feel the same.  We are individuals, yet we share this commonality… this bond.  We share this world.  The good, the bad, the laughs, the tears, the love, the heartache.  We share it all.

We take a lot from this world.  Sometimes the things that happen here affect us so deeply that they effect our first lives.

We bring different aspects to this game… this world, but the element we all bring is the Human Experience.  Only two things are real in our second life, the emotion and the money.

We love, we help, and yes we even hurt each other.  And we can’t live in the world alone – we all need each other.

Happy Spring!! I just got back from the ICON Lifestyle Fashion District and found a few freebies for the guys. I decided to get out of the studio today and enjoy the warm Spring day. I’ve set up a nice picnic lunch for me and  someone special. (Looks at his watch and wonders what’s keeping her). I found the basket and the two plates free at AMBIANCE Interactive Furnishings, which is part of the ICON hunt.

The outfit comes from our friends at *FIR*. ” The Dark Brown Shirt”, ” Green Pinstripe Pants,” and” The Wife Beater White” make a nice combination for a day out in the sun. The Skootcher Shoes are from HOC Industries  which I reviewed yesterday.

The other giftie I found was from Alphamale. This Black ICON promotional tee will let all the women know you are an Alphamale ICON.

…. I do… and I just love that smell… <3.. yay.. springy flowery items… I’ve had these dress in my inventory for a while now, and they get even more beautifull the longer I look at them. There are tons of dress at this 1L$-shop from Rily, so pretty much sure, every single one of you will find your springy dress that you like! (oh.. btw…. I couldn’t pick.. soo yay… i bought almost all of them ;)) And I am also wearing a non-free skin, but I can’t help it… what Renee has with Blowpop, and Whisper has with Curio… I have with YourSkin&YourShape… omg… they released a new skin ‘Andrea’ and I am in love! My other ultimate love is of course… blond hair! But i’ll save that again for the next blogpost… i think.. anyway… babbeling again… Enjoy xxx ^^.

all dresses – Rily –  Flower Garden Dresses – 1L/each (click the dress you like, if it appears on the big picture, rightclick it and select  ‘pay 1L$’. You’ll find the dress boxed in your Objects folder 😉 ) 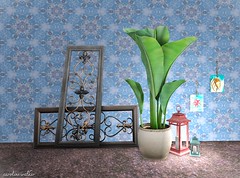 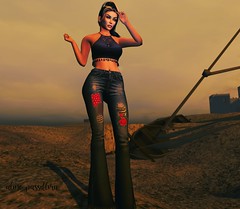 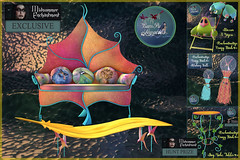 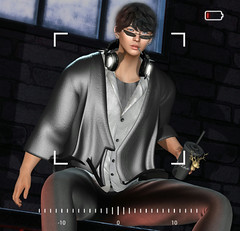