As you all know Im a skin-a-holic.. so I thought I would go around and take a look at some of the skins on offer at the moment, either as part of hunts or as part of other offers around the grid.

Leafy has a really adorable skin as their gift in the Red Packet Hunt that starts at Ohmai. You have to search for little Red Envelopes, and the theme of the hunt is Chinese New Year.

The Miso Skin comes in the Lumiel tone and with two options of brows and with or without freckles. It makes me swoon because its just so adorable.

My UglyDorothy have three packets to pick up at their store.. be sure to look high and low for them. Try not to get your fingers burned too much either. I did and ouch!

The Flowery hairpieces are in the packet hunt also and are the gifts from Atelier AM. They have three packets to find at their store also.

Mah Poor Quality has two skins in their red packet, and only one to find in their store.

This is one of them, the other skin that is in the gift is a paler skin.

Moving away from the Red Packet Hunt, JE*Republic have a new skin called Aimee as their group gift. Simply tp to the store, join the group and click the poster to recieve it.

There are also older group gifts and Lucky Board items set out on the shelves as dollarbies or freebies, including skins and hair, so take a good look while you are there.

Its Super Bargain Saturday time again.. And time for an exclusive skin preview from Heartsick. They have been revamping their skin line and have put out a preview in an exlusive make up for 60L.

You get a cleavage and non cleavage version with the option of freckles also. I cannot wait until the full release of these skins coming soon. They are just droolworthy.

Gato have this adorable dress for 60L as part of Super Bargain Saturdays, which I adore as its all ditzy and summery. The dress is on the back wall, up high, it has a 60L sticker on it so you can’t miss it.

And because sometimes you just need a pair of whacked out hippy pants, I bought these patchwork ones while I was there for 80L

The nipple plasters worn in the above picture are from ELO and cost 10L. There are more colours there too. If you go there be sure to check out their group Lucky boards. You will need to join the group before you can claim the prizes, but there are a pair of lowrise jeans on offer aswell as this cute ubermini dress/top.

Also between the Lucky Boards at ELO are cute little 10L tank tops like the ones Im wearing below.

The pants are from Ducknipple and cost 60L as part of Super Bargain Saturday.. And while you’re there, pick up the freebie noms right next to them.

And lastly, pop over to Azul to snatch the latest group gift. You can find it in the cocktail dresses section Join the group instore and give the poster a little pat to get this gorgeous red dress..

… or be a ***! LOL, this t-shirt made me laugh, cause when I am in SL I actually feel like a pretty doll, which I can dress up, change clothes and just make her as pretty as I want too. It’s like my childhood all over…. lol… soo for this t-shirt from Treel to say ‘Barbie is a *****’ is soooo funny to me. I decided to wear the most doll-face skin I have and like (which was sent to the FabFree group earlier) and yay it’s still available through the subscribo at CandyDoll. Paired it up with lovely grey eyes from Free Speerit.. and you’re good to go! But… don’t forget to wear some jeans from Allusions… or you’ll be running around butnaked, lol! Enjoy xxx ^^ 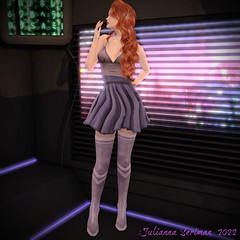