In any other life anyone would think you were Buffalo Bill or Ed Gein if you confessed to a skin obsession! Eeek! Thankfully you can get away with saying the most obscure things in SL and on the topic of skins, Amacci have given out this beautiful group gift of a set of three skins in three tones, each with a different style of a delicate rose tattoo already on the skin. Each skin also comes with hairbase and cleavage options.

This skin is in the tone called Fresh. It has the tattooes on the upper arms, one on the breast and one along the small of the back.

This is the tone called Bronze. The tattooes are on the side of the eyes and on the breast again.

This deliciously dark tone is called Coffee. Again you have a tattoo on the breast and a small one on the forehead, almost like a bindi which I think looks beautiful.

Don’t forget to check Amacci‘s hair sale out. All hair packs are 30L each. The hair in this picture is called Madelene and is part of that sale. The lingerie worn in the pictures is from Pixeldolls and is part of their ongoing 10L sale.

Rock Me Amadeus has set out a new dollarbie of a set of cheeky Tiger print tops that will be sure to stop guys in their tracks *smirks* can you see why?

Shown above are the Pink and Blue colours, but you also get green, lilac, orange and purple in the pack. Also upstairs you can find a 10L promotional female shape. The lowrise jeans worn in the picture are from Aqua but arent released yet.. consider this a sneak preview!

Speaking of Aqua they have a retro swimsuit on offer today for 10L called “The Marilyn”.

There is also a male outfit on offer called Wipe Out, along the same swimsuit vibe only shorts and a tank.

If you join the LeLutka group and search the notices you will find this mini dress as a group gift.

There are also a pack of glamourous shades and a jacket for guys in the notices too.

One store I found on my travels recently was a store called Super Possessed. They make awesome clothing for guys and have a small girls range. They also have a Lucky Chair there with some awesome prizes inside. What I am going to show you is from their FREE treasure box of goodies found near the middle of the store. It is stuffed with loads of things from t-shirts, belts, coats and a couple of full outfits to random things like a little Pikachu that sits on your shoulder! The things inside are pretty much unisex.. here are some things you can find..

This is the Team Possessed shirt, shown with the Chanel Fists in the small size. There are a large size in the box for males.

This is the EG-6 Tank, shown with “The Belt”

This is the Danger Tank, shown with the Alchemists Belt. This is just a small selection of whats in the treasure chest!

Zeery has some more yummy scarves for you to scoop up and keep warm with while its still chilly out there.. well for some of us..

This is the Purple People Eater scarf and is 5L in store. There is also a male version right next to it. Be sure to check around the store as there are alot more offers. 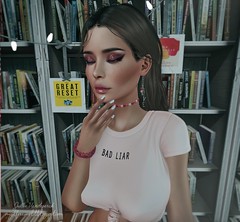