If you go along to The Plastik you are sure of  an amazing Dollarbie Halloween treat! A big box of goodies is awaiting you just inside the door.. filled with 12 female skins, some cute armwarmers, a fatpack of leggings and a unisex jacket.

First off the skins.  There is a very interesting skin called “Skeleton Skull” which has a skeleton print all over it. One is called Lagoona Scales which is a gorgeous shade of dark green and has a scaled effect that kind of reminds me of Mystique from the Brian Singer XMEN films. Then there are two sets of 5 skins called Ghost Plain and Ghost Smoke, each with a different make up. These are really beautiful and the Smoke skin has this surreal smoke effect all over the skin which makes it really ethereal looking. It is however slightly hard to photograph, but I have tried my best to capture it in the following pictures.

This pictures shows the difference between the Ghost Plain and the Ghost Smoke skins a little better.

While I was at the store I was lucky enough to win the Infinity Dress in Aqua from the Lucky Boards. You will need to join the group to be able to play the boards, so make sure to do that if you want to try your luck. I am wearing it here with the Leggings and the Armwarmers that were part of the Halloween Gift Box. 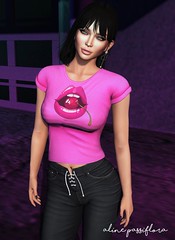