In Meghindo’s there are several gifts laid out on the counter, they contain a set of catsuits in black, gold, and red (Ive pictured the gold one), and a short dress, center. The thing I really love about this dress is the top. I’ve worn the same top in the third and fourth pictures. This shirt comes with a variety of decorations set on the jacket layer.. so you can mix and match the little gem to go with other outfits.

The dress shown in the first picture is not on the counter. For this dress, look to the right of the counter, it’s on the wall and is called Black Valentine’s (1L$ also).

In the last picture I’ve shown the cute red dollarbie Floribunda skirt from 24 Shoo-Shoes (right next door to Meghinda’s).

Shopping bag pose is a dollarbie from Juicy. Other poses are from LAP. 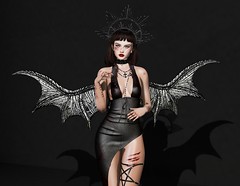 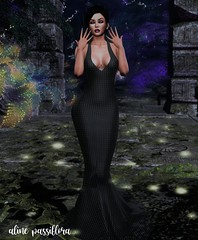