Bare Rose always has a story to their hunts, I like that. Their latest hunt is the Stealthy Night Hunt, and the prizes are.. well, they’re Bare Rose, which is a good enough reason to go hunt for them.

When you get to the starting point, grab the starting note card from the hunt kiosk. It looks like this, and has note cards in a variety of languages.

The first thing you have to do, of course, is dress like Santa.. but not a ‘normal’ Santa, because, after all.. this is a Bare Rose hunt. There are cool Black Santa outfits for both males and females.

Then you pick up the prize (as if the unconventional Santa outfit wasn’t prize enough, right?) in a couple of packages. The train is a bit tricky, but I bet you can figure it out easily enough. When you have all three Flurry Red Chapters, you have the complete outfit. Again, this comes in both male and female versions even though I’ve only shown the female version here.

But don’t stop there, because there is one final prize to find, the clue is in your final note card.

I love lingerie — what girl doesn’t. It’s so fun to dress up and snuggle under the warm blankets with that someone special.

Hudson’s has a very special December gift for their group members: Victorian Secret Black and Red Lace lingerie. This is actually two gifts in one since this lingerie comes in two versions. So put on your Hudson’s group tag and grab this beautiful lingerie.

There is also a sweater outfit for guys on the wall in the new sweaters section, it’s the outfit that has the red ribbon on the vendor. And for ladies, check the back wall, under the staircase, for even more gifts.

If you’ve been busy, like a lot of us are at this time of year, Ravenlynn Templar has made it super easy for us by putting her Christmas gifts to us where they’re easy to find: under the LVS Christmas tree of course!

You’ll find several cool items, each for 1L$ — a give-away considering the high quality of Ravenlynn’s work. I picked up a few holiday themed prezzies, it will be sad to have to pack these away till next Christmas after the holidays.

hmm.. Christmas in July party anyone?

I’m wearing the  Holly Jolly outfit in red (comes in several colours) and  the My Dead Kitty Christmas Combat boots. Hair and cute doe ears are from eat rice. Antlers (so not free) are from Illusions. Note: Illusions has some great dollarbie packs of masks and hats on the table in the shop.

The neko in me also had to have the Santa Claws Paws because.. omg, just look at those cute little candy cane nails. 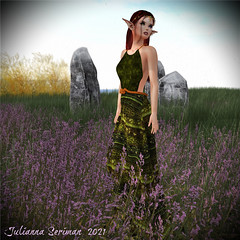 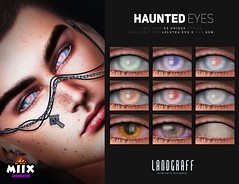 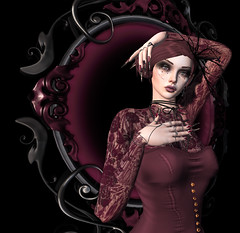